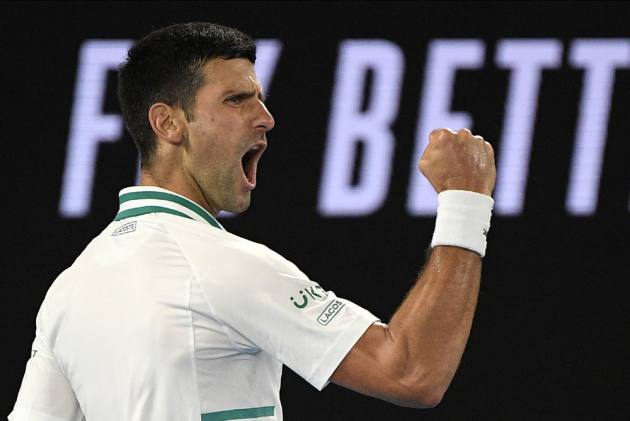 The Serbian star closed to within two major crowns of men's record holders Roger Federer and Rafael Nadal after impressively beating Medvedev 7-5 6-2 6-2 in one hour, 53 minutes in cool conditions on Rod Laver Arena.

Djokovic, who suffered a suspected abdominal injury earlier in the tournament, showed just why he is the king of Melbourne, where he clinched a record-extending ninth Australian Open title.

The world number one produced a classic display of returning and again stepped up in key moments, in contrast to Medvedev.

Carrying a 20-match winning streak into the decider, Medvedev – playing his second grand slam final – made errors at important stages despite holding his own from the baseline for large parts against an opponent he had beaten in three of their previous four meetings.

Medvedev made a nervous and wayward start and was broken in the second game, but he quickly responded, pulling the break back in the fifth game, one marked by a grinding baseline exchange at 15-30 before Djokovic put an overhead into the net.

Both players held with relative comfort until Djokovic landed the key blow to take the first set, the Serbian fans in Rod Laver Arena rising to their feet after Medvedev sent a forehand into the net.

The pair traded breaks again to begin the second set, this time Djokovic recovering from dropping serve, and he won four straight games after Medvedev faltered in a sloppy fourth game.

After an early break from Daniil Medvedev, @DjokerNole wins four games in a row to lead the Russian 4-1 in the second set.#AO2021 | #AusOpen pic.twitter.com/Lv21QheA07

Djokovic produced a tough hold for 5-2, a moment that led to an increasingly frustrated Medvedev – struggling to come up with answers – to smash his racquet at the back of the court before losing the second set.

Medvedev squandered another chance as Djokovic dug himself out of a 15-40 hole in the opening game of the third set and then broke, the Russian netting a volley after a wild double fault.

In yet another key moment, Djokovic held from 15-30 in the seventh game in front of a crowd baying for more tennis, before going on to see out his historic success.

Data Slam: History for the king of Melbourne

Djokovic's ninth Australian Open title saw him become just the second man to win a major at least nine times. He joined Nadal, who has owned the French Open with 13 titles. That pair have won 10 of the past 11 grand slam crowns, as the 'Big Three', or 'Big Two', continue their dominance.