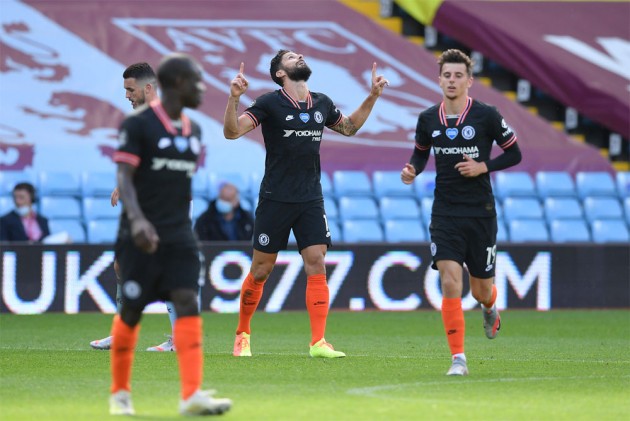 Chelsea came from behind at Aston Villa to move five points clear in fourth as two goals in as many second-half minutes earned them a 2-1 win. (More Football News)

Kortney Hause scored his first Premier League goal two minutes before the interval to give struggling Villa a half-time advantage.

However, substitute Christian Pulisic levelled for Frank Lampard's side before Olivier Giroud made it eight goals in his previous six games against Villa when grabbing the winner.

It was Chelsea's first away win in the Premier League in 2020, the victory providing Lampard with cause for celebration on his 100th match as a manager.

6 - Olivier Giroud has now scored in each of his last six Premier League appearances against Aston Villa (8 goals), with this his first match against them since netting a hat-trick for Arsenal in May 2016. Villainous. pic.twitter.com/QGWQ42HHpv

Ruben Loftus-Cheek made his first appearance in 13 months following his Achilles injury and there was evidence of some rust when he miscued an early header.

Chelsea dominated the opening exchanges and only a fine one-handed stop from Orjan Nyland denied the lively Mason Mount from distance.

Nyland was fortunate the ball did not roll back over his line when he spilled what should have been a routine save from Mateo Kovacic before snaffling at the second attempt, with Kepa Arrizabalaga more convincing at the other end in denying Anwar El Ghazi.

Loftus-Cheek almost got on the end of a cross following a twisting, turning run from Mount but, against the run of play, it was Villa who claimed the half-time advantage.

Hause's first effort from Douglas Luiz's delivery was stopped by Kepa yet the Villa defender picked himself up and stuck away the rebound.

There was a sense it might be one of those days for Chelsea when Giroud arrived just too late to divert Cesar Azpilicueta's cross home at the near post.

However, the Spaniard's next delivery found its way through to an unmarked Pulisic and the substitute steered his finish under the crossbar on the hour mark just five minutes after coming on.

And, two minutes after equalising, the Blues went ahead through Giroud as the Frenchman collected Azpilicueta's pass, swivelled and fired an effort that deflected in off Conor Hourihane.

Hause headed a Hourihane free-kick over the top but there was no stirring comeback attempt from Villa, who remain in the bottom three.

What does it mean? Chelsea in control of top-four race

The Blues had seen top-four rivals Manchester United, Sheffield United, Tottenham and Arsenal all drop points before they returned to action, and they now have a five-point cushion over United and Wolves with eight to play.

Villa missed out on the chance to move out of the bottom three and their performance provided little evidence they have the quality to stay up.

Azpilicueta dishes out the assists

Both Chelsea goals were served up by their captain, who moved onto five Premier League assists for the season.

The full-back's best ever total in a top-flight campaign in England is the six assists he had in 2017-18.

It was perhaps no surprise that Loftus-Cheek looked off the pace given his lack of action recently, and it was his removal for Pulisic that helped turned the game on its head.

Loftus-Cheek had just 25 touches in his 55 minutes and struggled to get into the game.

Newcastle United and Wolves, who both won their first games back, are Villa's next two opponents. Chelsea have a couple of difficult fixtures next week, with a home clash against Manchester City preceding a trip to third-placed Leicester City.