Song Of The Street

Before 'Slumdog' Azharuddin Ismail, there was Shafique of Salaam Bombay. And at the New Delhi station, at any given point, there are some 2,500 runaway children seeking shelter. Join the 'guided tour' chaperoned by a reformed streetkid, Brijesh... 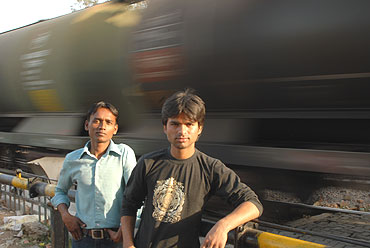 A few days after we saw pictures of the ‘slumdogs’ donning tuxedos and dining at the Governor’s banquet in Los Angeles, newspapers ran a picture of Azharuddin Ismail, the youngest of the cast who played the lead role of Slumdog Millionaire, having his meal by lamplight in a Mumbai shack. The show is over kid, you are back where you belong. Harsh words those may sound like, but could reality have been any different?

When Mira Nair was casting for Salaam Bombay in the late '80s, she auditioned many street children and the ones who were selected received training in acting from Barry John through an acting workshop. The film was highly acclaimed, being the first of its kind, making a street-bound hero/protagonist, Chai-pao, out of a real-life ragamuffin. Shafique’s brief but epic journey -- from life from under the streetlights to life under the arclights, and everything that comes with it -- lasted as long as Salaam Bombay was in the theatres.

I met Shafique in 1991 at a school for street children run by Salaam Balak Trust at the New Delhi Railway Station, where I had volunteered very briefly.

Reality had begun to sneak in on Shafique, like a quietly rising flood, taking him back to where he belonged. It was one thing to play one’s own self in a film -- his real-life mannerisms had to be honed only a bit to make them camera-friendly. From that fact, to really make the transition -- that is, to have the capacity to come good as different characters for different films -- is not a guaranteed skill.

Since Shafique had already tasted the glamour of the tinsel world and felt he had a chance of making it big there, the samaritans of SBT kept finding him employment at different studios, sometimes as a light boy and at other times as a camera assistant, in order to keep him within the folds of the entertainment industry, waiting for the day lady luck might smile back at him.

SBT ran a makeshift school for street kids on the terrace of the Railway Police remand cell. These were essentially children who had run away from their homes in villages or small towns, mostly from Uttar Pradesh or Bihar, perhaps due to the brutality of an alcoholic father or a stepmother or simply driven by poverty.

A runaway child usually arrives as a ticket-less traveller straight to the railway station. The railway terminal then becomes home, or at least a place where the homeless child instantly finds a roof over his head, leftover food from pantry cars to fill his belly, a possible employment as an unregistered railway coolie or a sweeper. The natural byproduct of such a shelter is guaranteed indoctrination in crime (petty and serious), drug and sexual abuse, possible HIV infection. For SBT, the railway station served as a readymade contact point to find miserable children living a high-risk existence and get them back to some semblance of normalcy.. Shafique was the posterboy for the kids at SBT.

The hype surrounding Slumdog Millionaire made me enquire about Shafique’s whereabouts from my old contacts at SBT. It’s been a strange trajectory for him. Apparently, after failing to make anything out of different lines within film-making, Shafique moved from a suicide attempt and later a stint in jail for theft and violence and has finally been rehabilitated. He now runs an autorickshaw in Bangalore and is married with four children.

I decided to make a trip to SBT and join the ‘guided tour’ conducted by them of street kids in Delhi which begins from the New Delhi Railway Station and is chaperoned by a reformed streetkid, Brijesh.

Everyone meets up under a peepal tree behind the Railway Reservation office. There is an elderly Californian couple now based in Christchurch, New Zealand; a New York-based documentary film-maker with his video-camera and his Indian assistant, who he introduces as his sound recordist -- the chap’s only job is to hold the mike gong, even that he drops a few times during the course -- and myself. We begin our two-hour tour, call it the Streetkid City Walk, with Brijesh. 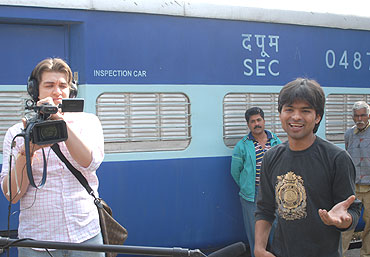 Brijesh being filmed during the walking tour

This handsome, well-turned-out boy, who speaks a smattering of English and will celebrate his 21st birthday on March 25, seems an experienced hand. He promptly points out to our film-maker companion that he should have carried lapel mikes instead. We walk through the various railway platforms, halting at places that serve as makeshift school, dispensary, lending library and contact points for street kids run by the SBT.

Frequently, bright-eyed, unwashed kids greet us with a namaste. Some shake hands with the foreigners. A boy appears from behind one of the stationary wagons, looking quite spaced out, and goes into a wild jig. Brijesh tells us this boy is on drugs -- though he was like that not very long ago. Now he is addicted to sniffing the whitener used for correcting typewritten sheets. The Californian couple say you find them even where they live.

Brijesh himself ran away from a cruel uncle’s home in Merwah, Bihar, when he was eight. Travelling in a western-style lavatory in a Delhi-bound train, Brijesh got off at the Kanpur railway station. The ways of the world soon taught little Brijesh how to find employment. Like other kids his age, he started collecting used packaged water bottles to be refilled and resold at half the price.

The business found him regularly in the hands of cops. He was sent to remand homes many times, only to return to his business at the first opportunity. Soon, he now laughingly admits, the cops knew too well what he was up to. One day, when he was selling water bottles, a cop held a burning cigarette butt to a wound behind his ear, and then slapped him hard repeatedly on the same ear. Brijesh could not bear the pain, dropped all his bottles and ran and wept. At that point, one of the older street kids, a whitener-user, offered some of the stuff to Brijesh to sniff to relieve himself of the pain. Brijesh says his head swam in circles when he first sniffed. He no longer could feel any pain. The ten-year-old had become an addict.

Soon after, Brijesh landed at the New Delhi station, where at any given point there are some 2,500 runaway children seeking shelter. Here he found he could not carry on with his old business. The Delhi cops were stricter with the reselling of water bottles. Brijesh started sweeping trains and discovered that if he rummaged through the rubbish carefully, he could fish out a neat twenty to twenty-five rupees everyday. (It’s a secret he still keeps to himself and wonders if any other kid has figured out that a treasure lies within!) The money came in handy for buying whitener and movie tickets. Every Friday he bathed and put on fresh clothes to watch, preferably, a Sunny Deol matinee show.

Food was never a problem, thanks to leftovers from the pantry car. He remembers the Howrah Rajdhani catered the best menu. At times, for a change of taste, he would visit the Bangla Saheb Gurudwara langar. But the little boy would get constantly beaten up, robbed and abused by the older boys and cops alike. Sniffing of the whitener had turned him into a zombie.

Eight years ago, Brijesh met SBT at one of the contact points at the railway station. He is completely rehabilitated on the drug abuse front now and passed the 12th standard examination last year. He is currently studying tourism through correspondence from IGNOU. His uncle showed up a few years ago to take him back but he refused. Life has given Brijesh a second chance. But the ground beneath his feet is not yet firm enough that he can afford to fall and stand up again.

As we parted ways, our documentary film-maker stuck his mike under my face and asked me that rarely asked question in television journalism: How do I feel hearing Brijesh’s story?