Social Star Wars: May The Likes Be With You 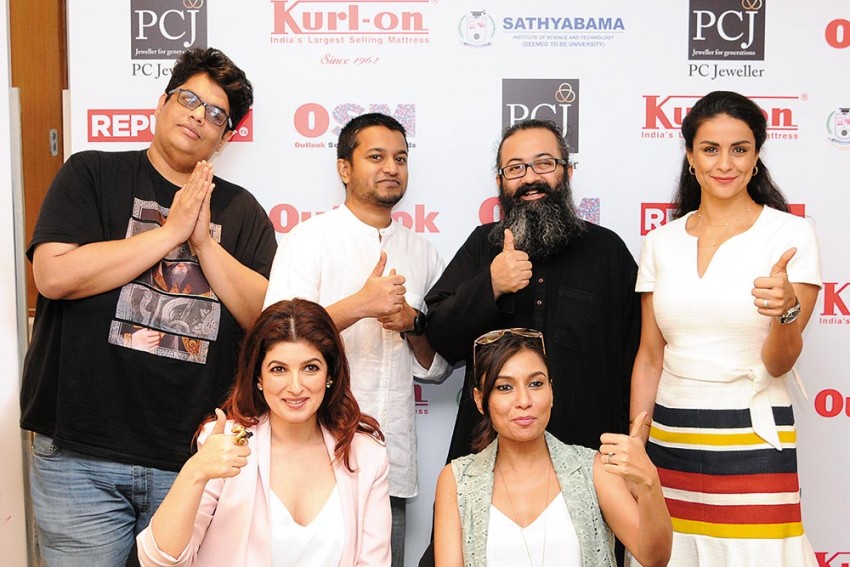 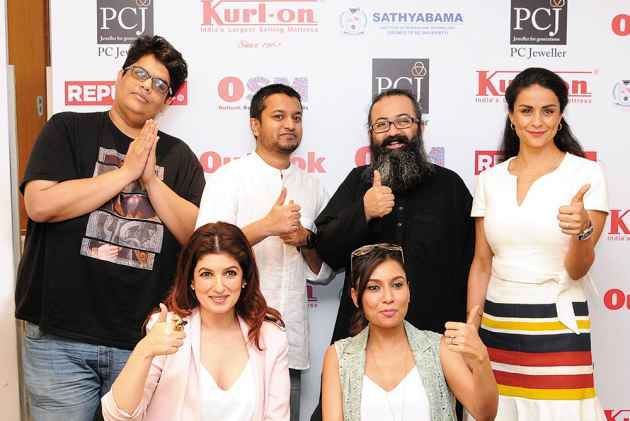 When Outlook asked me to be the Project Editor on PC Jewellers Outlook Social Media Awards this year, the first reaction was this heady buzz with the Nyan Cat track playing in loop in the backdrop. Not too long time back, I was sharing space with Shashi Tharoor, Prasoon Joshi, Shilpa Shetty, Dilip Cherian and Ritu Berry, amongst others, as a part of the jury during the first Awards. The entire thing did a quick playback with no buffering. It was plain overwhelming to discuss and discover the expanse of Social Media and the people governing it. The canvas was way too wide. Nobody had attempted one such initiative, and with the consideration-set being so humongous, it was quite a challenge narrowing down our lists.

Such Names, Much Wow.
As the meme goes. 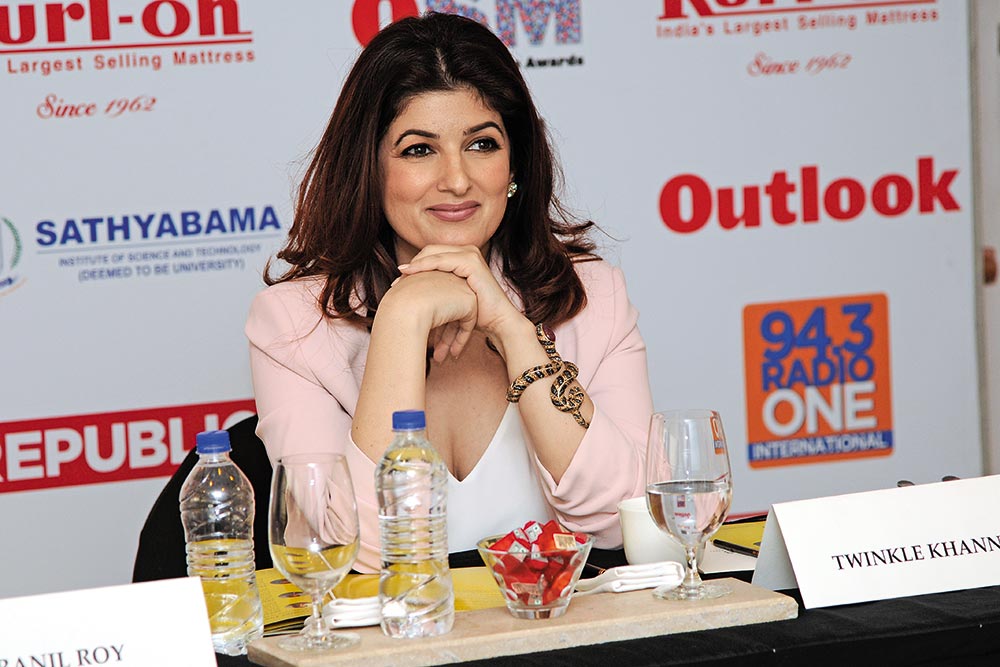 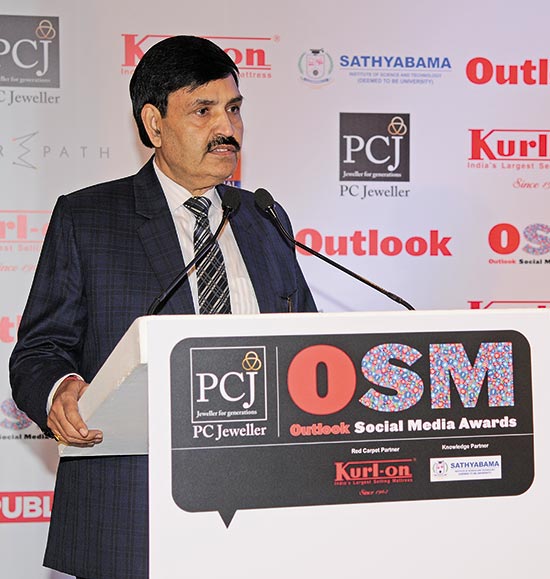 It turned out to be quite a journey for not just the winners, but also for us, the jury members. For every winner that we zeroed down on, there were at least two contenders who deserved that award equally. The idea was to recognise both the stalwarts and the steady workers, the emerged and the emerging, treating them at par. The nominees beyond the celebrities surprised, shocked and inspired us in equal measure with their amazing presence and personas, making our selection excruciatingly tough.

And THAT is what Social Media has achieved in India. It has empowered the people, giving them authority, control and influence like they have never experienced before. It has made them equal to everybody else. It has made them strong enough to compete with, stand next to and emerge as icons parallel to the established heroes. It has given them the dominance, making them believe in themselves and their surroundings. That a Shirley Setia can score over a Sonu Nigam. That a Shivesh Bhatia can compete with Vikas Khanna. That the follower is now also the ruler. 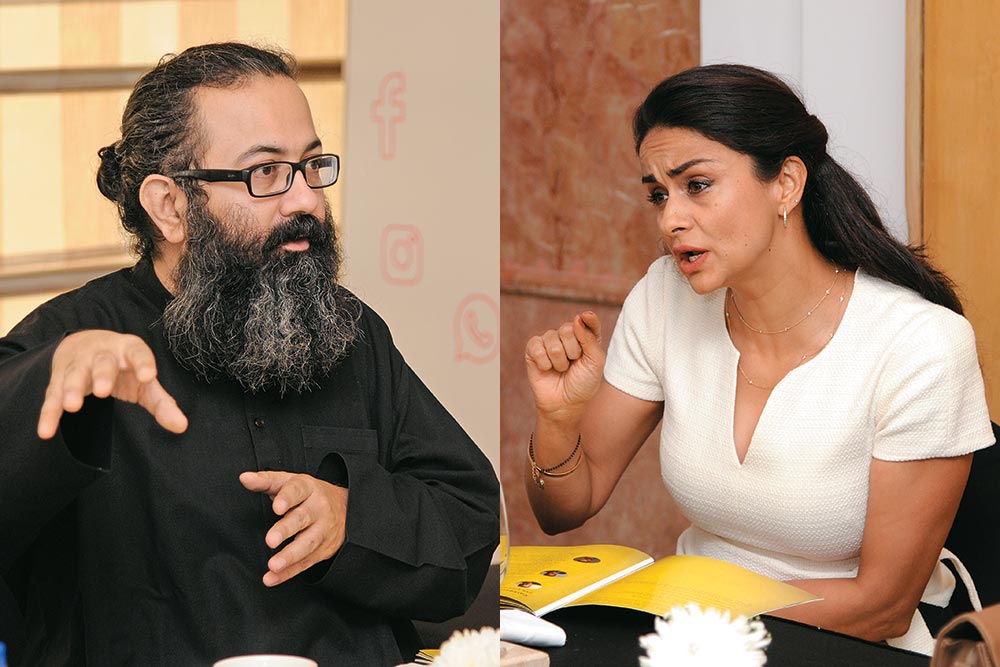 Outlook has always been the first to respond to such transformations, both real and virtual, and the PC Jewellers Outlook Social Media Awards, abbreviated to PCJ-OSM Awards in an almost-perfect millennialspeak, is an obvious extension of this thought. The last set of Awards saw home-grown Social Media stars including Ssumier Pasricha, Ajay Sood and Scherezade Shroff rubbing shoulders with the likes of Amitabh Bachchan, Arvind Kejriwal, Priyanka Chopra, Suresh Prabhu and Saina Nehwal, taking home the coveted trophies. 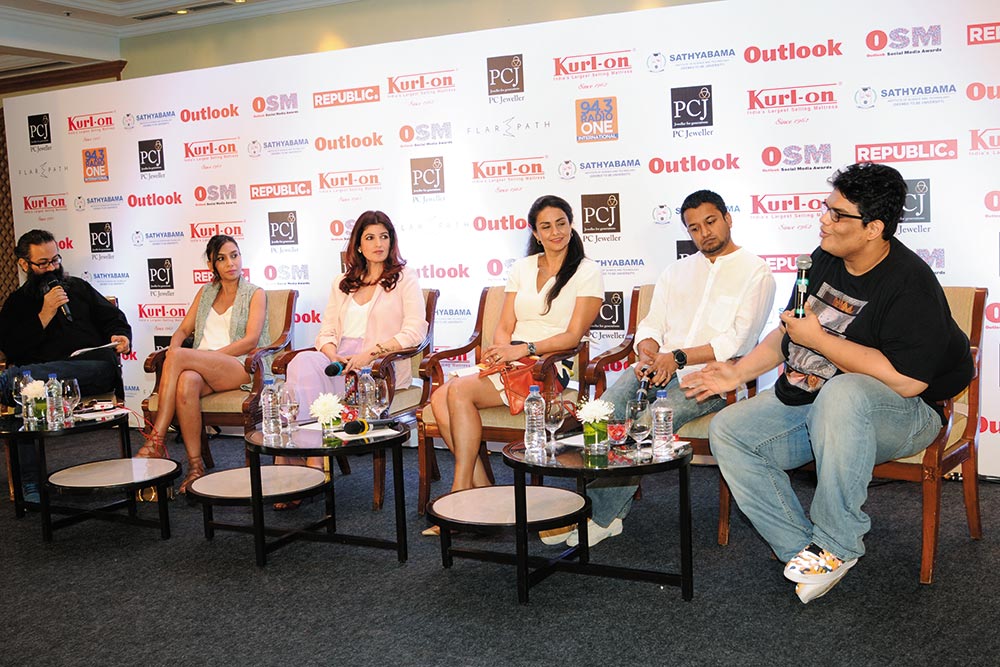 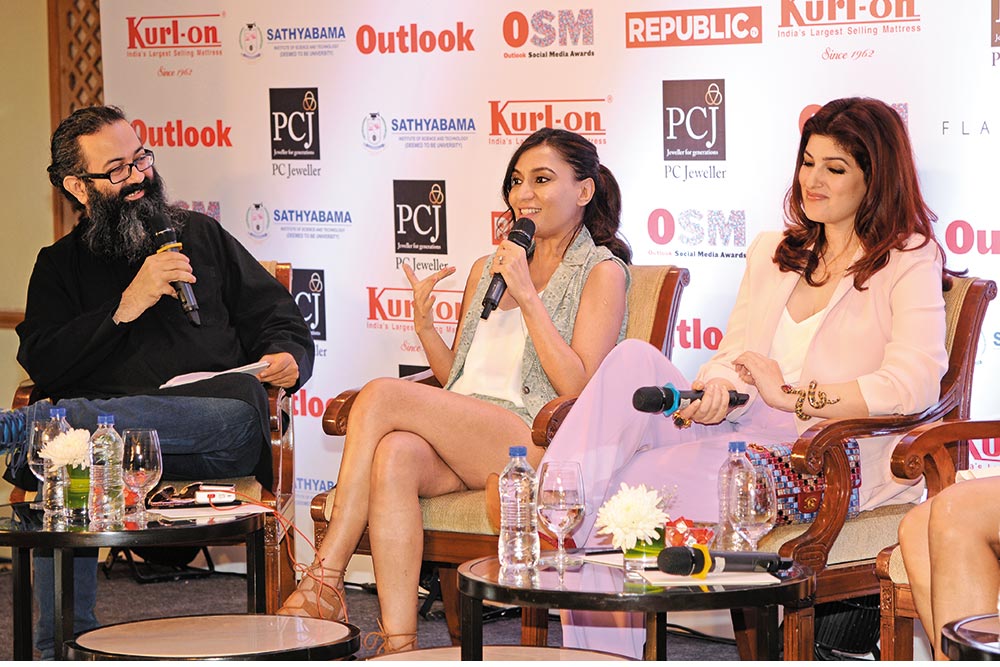 So I suppose Charlie bit me, again, and I was signing up for the job already. That fetching experience of working with, discovering and honouring some of brightest names in Social Media was too much of a temptation to let go of.

And how correct I was! The ever-so-witty-and-funny Twinkle Khanna aka MrsFunnybones agreed to chair the Jury, with the pre-condition to abstain from voting in categories where her husband Akshay Kumar was a nominee. This righteousness was just the right note to start the Awards with. If that wasn’t enough motivation, the jury line-up turned out to be a veritable who’s who of Social Media in India, practically covering the full spectrum that can be. 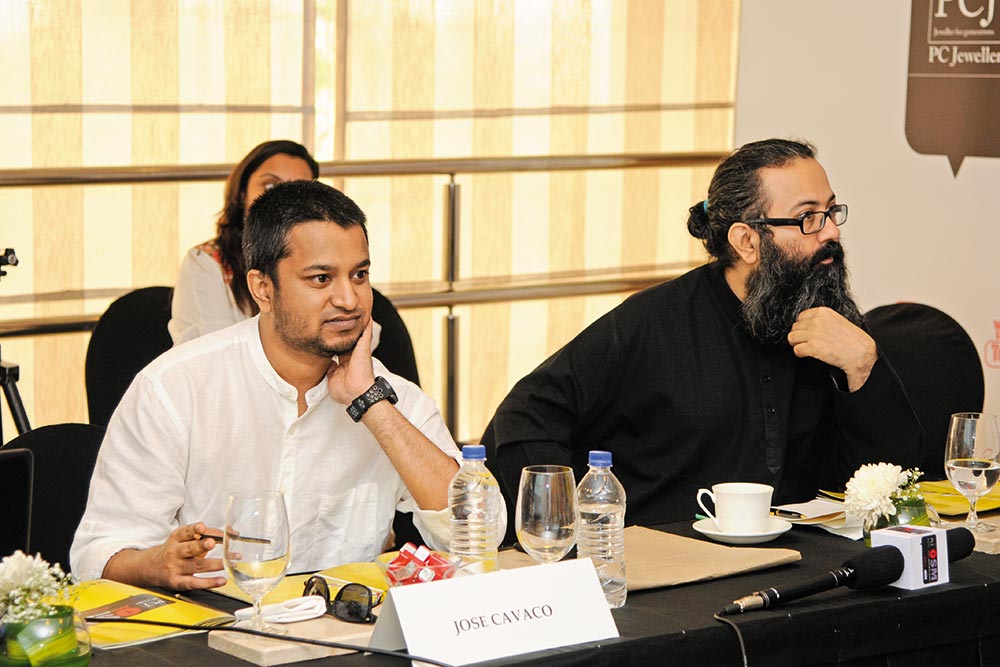 Jose Covaco and Vaibhav Vishal at the jury meet 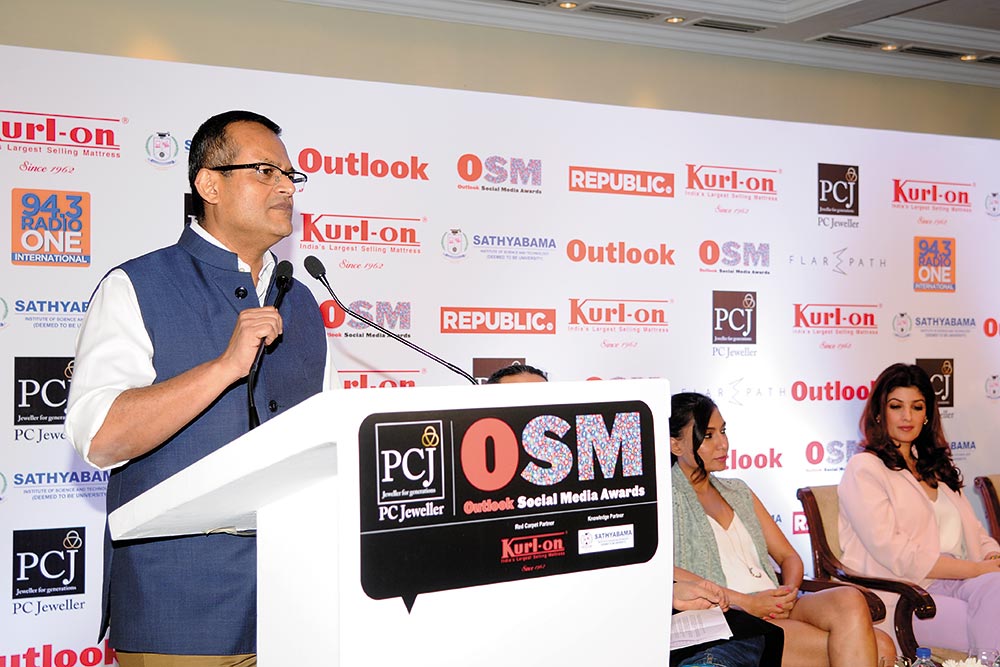 Poonam Mahajan, one of the coolest young Parliamentarians around with a distinct tone-of-voice, was the first to come on board along with producer, director and writer par excellence Hansal Mehta who was gracious enough to confirm his presence in the panel despite the on-going promotional activities around his upcoming release, Omerta. Actor-activist-pilot-biker-adventurer Gul Panag was next in line, followed by Social Media entrepreneur and the resident queen bee of the Indian digital space, Malini Agarwal/ MissMalini. Former VJ, Instagram star, podcaster and funnyman Jose Covaco aka Hoezay was soon on the list, too. The icing on the already very rich cake, of course, was stand-up comedian Tanmay Bhat getting added to the motley bunch. Then there was Indranil Roy, the suave CEO of the Outlook Group, providing sincerity and seriousness to the mix. Clearly, I was the only commoner in this Bigg Boss house! 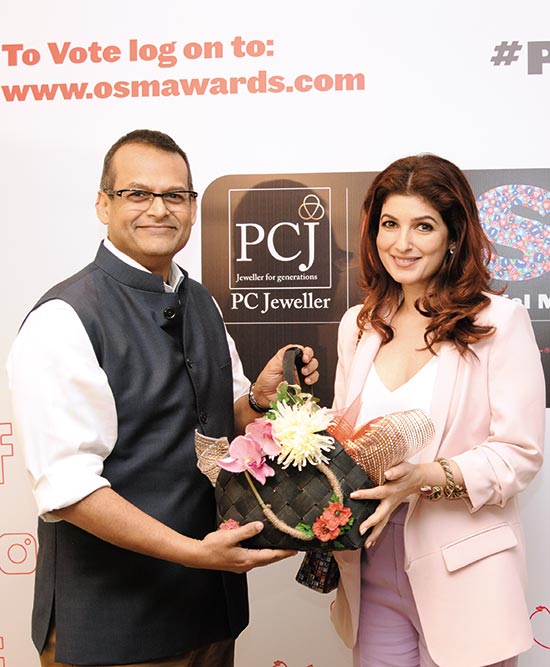 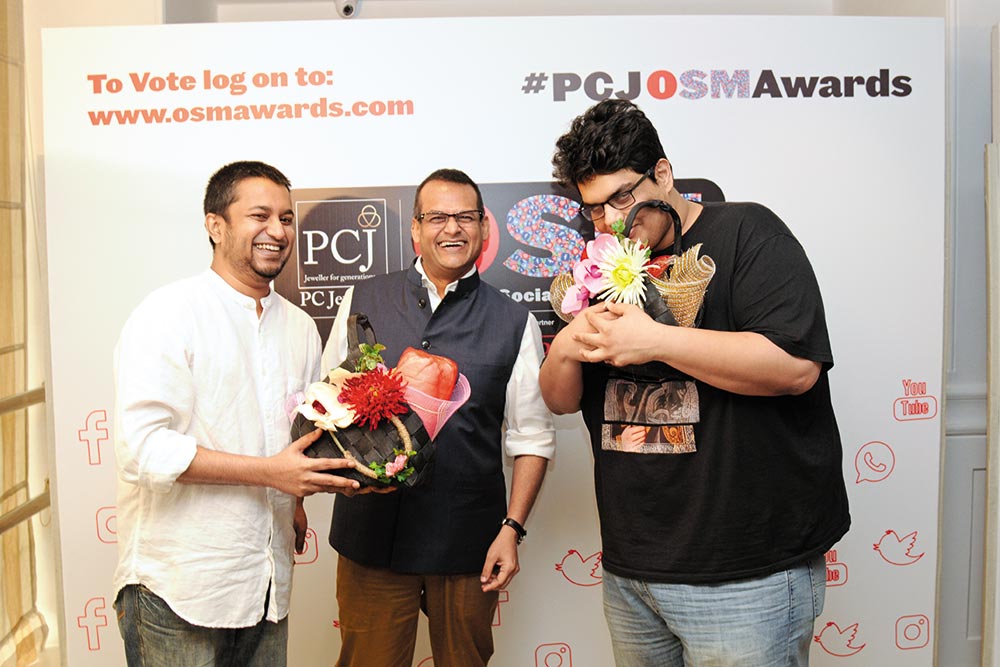 Jose Covaco, Indranil Roy and Tanmay Bhat are all smiles for the cameras 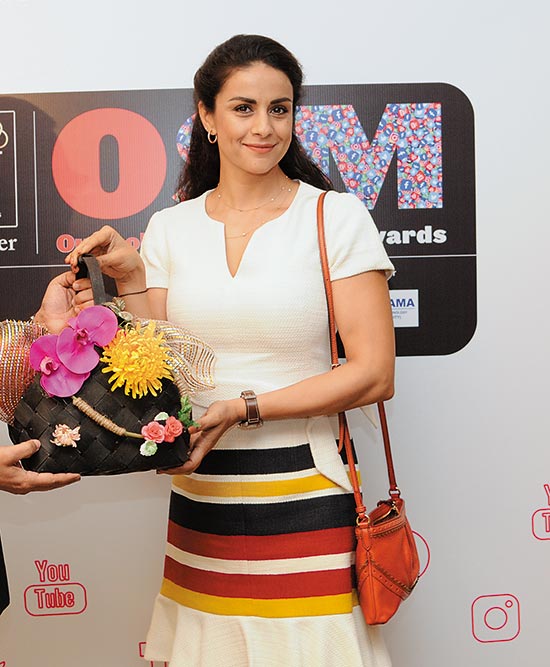 And a fun time was had by all?

Not really! The jury meet turned out to be quite an affair, with discussions and disagreements galore. While Hansal and Poonam could not be present in person, and their votes reached us in sealed envelopes, the rest of the jury members more than made up for their absence. Everybody had their own take on things, introducing entirely fresh perspectives. With sass, panache, wit and elegance, and not necessarily in order. Putting opinionated people at the same place at the same time always takes the level of discourse to extraordinary heights, and this room was no exception. There was rationale, there was reasoning, there were differences and the occasional laughter, but the gravitas never left the building. That all the shortlisted nominees, and a few that were added by individual jury members, were equally motivating made our discussions even livelier and louder. The contributions were honest, the arguments sincere and the conclusions uncompromised. 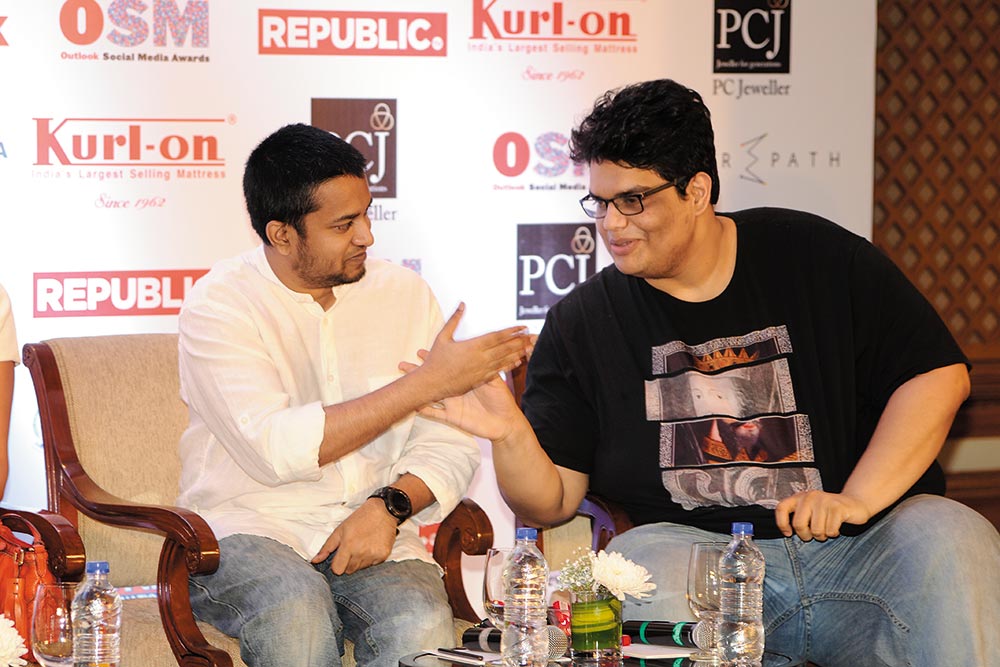 Jose Covaco and Tanmay Bhat during the panel discussion

The jury is now done with its job, but their votes just have 50% weightage. The actual decision makers are the people, the readers and followers of Outlook, and the voting continues on www.osmawards.com. Not only can the general public vote for the nominees recommended by us, they can also add their own contenders to the list. These nominees have an equal chance of winning with the right number of votes backing them up. The mechanism is as democratic as it can be, perhaps as democratic as the Social Media space itself. So clearly, there will not be no Bik Gayi Hai Gormint complaints, we promise you! This is our combined ride, and you are in the driver’s seat. 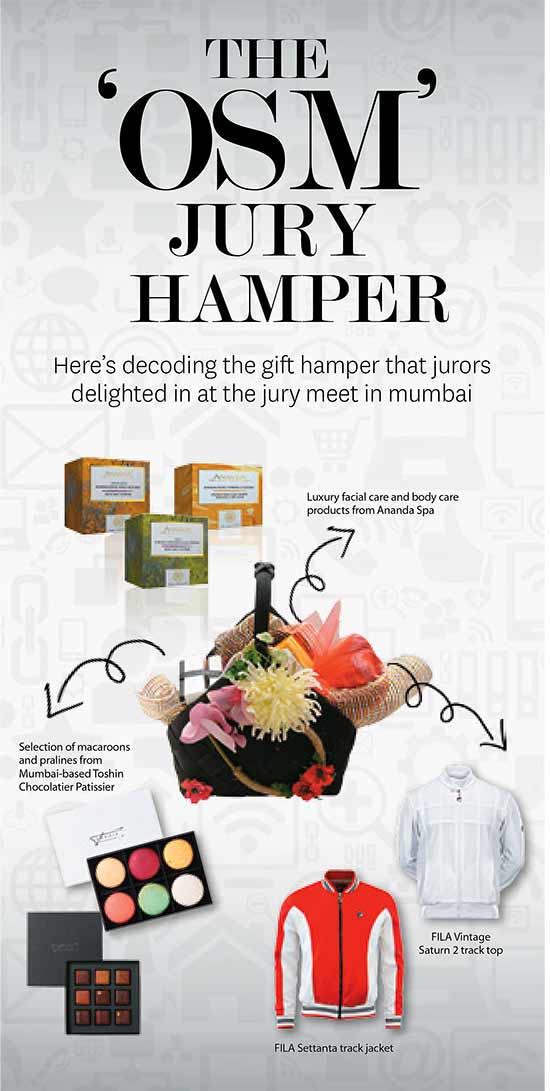 What used to be the fringe, the regular, is now becoming the mainstream with its new set of icons, challenging and breaking the hegemony of the established and the enormous. From political pundits to fashionistas, business insiders to Bollywood experts, comedians to musicians, underground voices to social watchdogs, image makers to image breakers... the space has space for everybody. And everybody is a star. 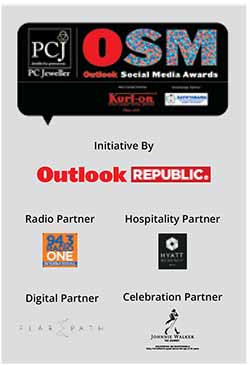 See you at the Awards, all of you!

(Vaibhav Vishal is the Project Editor on PC Jeweller Outlook Social Media Awards. He is a Mumbai based writer and creative consultant. While he has worked with brands like MTV, Red FM, Discovery and Eros International, but he prefers being known for his various Doing Things tumblrs, the RealHistory Social Media handles, and the viral pieces from his blog www.ofnosurnamefame.com.)