So What's Musharraf Playing At?

Why all this fuss and pother over Musharraf's much-hyped interview, especially if he has only repeated what he has said before, including in his book that was released with such fanfare in October? 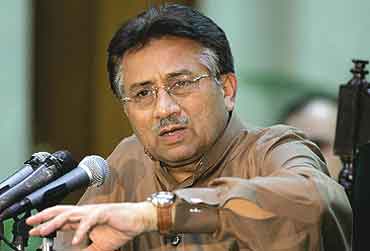 Immediately after President Pervez Musharraf's much-hyped interview with an Indian TV channel, declaring that he would "give up Pakistan's claim on Jammu and Kashmir" if India accepted his four-point proposal for settling the issue, seasoned observers of Pakistan had called it "old wine in a new bottle". This was dubbed a "knee-jerk reaction" and too hasty a rejection of the General's offer. What an irony it is therefore that the official Pakistani spokesperson, Tasnim Aslam, first and later Pakistani foreign minister, Khurshid Mahmood Kasuri, have asserted that there is "nothing new", in Musharraf's statement.

Kasuri has indeed gone to great lengths to emphasize that the Pakistani president has been saying the same thing for several months, most recently and far more elaborately to A. G. Noorani, who had interviewed the General on behalf of a fortnightly newsmagazine. The Foreign Office lady has quoted chapter and verse to argue that Pakistan had "never laid a territorial claim on Kashmir", leave alone call it an "integral part of Pakistan", because its fundamental position was that the "Kashmiris must decide". Technically, she is entirely right. But, in fact, she has shied away from admitting that the choice before the people of J&K is "India or Pakistan". There is no third choice though a very large section of Kashmiri "separatists" screams for "azadi" or independence.

"The basis of our stand on Kashmir", Kasuri has said again and again, "are the UN resolutions". Musharraf's four-point offer of a settlement— essentially a plan for an "autonomous" and "demilitarized" Kashmir on both sides of the LoC, jointly "supervised" by Pakistan and India— is, according to him, a "compromise" but it is a compromise that would never be made "unilaterally". The "brave and courageous" leader of Pakistan is showing "flexibility" in the hope that India would be flexible, too. Musharraf's attempt, according to Kasuri, is to create a win-win situation that would benefit everybody— India, Pakistan and Kashmiris.

The question is: why then all this fuss and pother, especially if Musharraf has only repeated what he has said before, including in his book that was released with such fanfare in October? The answer lies in just a dozen words— "I will give up Pakistan's claim on Kashmir", if .— that he used for the first time. This has enraged many in Pakistan, especially the Punjabis, who feel that Musharraf has "betrayed" their basic credo, bun ke rehega Kashmir Pakistan (Kashmir will become a part of Pakistan). They also allege that Musharraf's offer "negates" the two-nation theory, forgetting that this dubious theory went by the board in 1971 when Bangladesh liberated itself from the oppressive rule of the western half of Pakistan.

Critics have also bitterly asked: why is the president giving up Pakistan's claim on Kashmir when it had fought three wars over the disputed state and even threatened a thousand-year war? The eloquent Kasuri has had his answer ready. Yes, he says, wars have been fought, but to what end? "We are living in the 21st century, for heaven's sake", he has said, adding that both India and Pakistan are nuclear states, both having the capacity to "destroy each other several times over". In these circumstances, all disputes, including the core one, have to be settled through peaceful negotiations, which is what Musharraf is doing.

However, it is all for the record and for dousing down the hostile public opinion within Pakistan. The reality is quite different. Musharraf is under considerable pressure from the international community, especially the United States, to stop supporting the terrorist activity in both Afghanistan and India. The resurgence of the Taliban in Afghanistan is particularly hurting Washington and, of course, Kabul. Only the other day, President Karzai of Afghganistan declared that by supporting the Taliban Pakistan was "trying to enslave us". According to The New York Times, after Musharraf's agreement with the tribal leaders of Waziristan, this federally administered tribal area of Pakistan has become a "Taliban dominated" province.

As for India and the Kashmir issue, Musharraf is trying to win some brownie points with the international community by making out that he is being "flexible" over Kashmir and is making "reasonable" proposals to solve the problem. He knows that India cannot accept his plan. There already is self-rule in the Indian part of J&K but none in Pakistan-Occupied Kashmir (POK) and the Northern Areas that are treated worse than a colony. Similarly, no independent country can agree to "demilitarize" any part of it completely. Of course, the number of troops, even in Kashmir, can be reduced but only after cross-border terrorism has ended. Even so, Musharraf is skillfully exploiting for his purpose, the back channel, Indian media and, above all, Prime Minister Manmohan Singh's statement that the boundaries in Kashmir cannot be redrawn, but they can be rendered "irrelevant".

Remarkably, an American think tank having links with the Pentagon, Stratfor, shares this analysis. Even more importantly, Syed Saleem Shahzad, a distinguished Pakistani journalist, has written, "The recent change in Islamabad's language of diplomacy with the West and with New Delhi is superficial and just a matter of gaining time until a new situation emerges in the region".

All this having been said, let me hasten to add that while we cannot accept much of what Musharraf is proposing tactically for reasons of his own, this should not be an excuse to give up the peace process that has gone on, though with little to show for it so far, since January 2004. More significantly, the across-the-board cease-fire between India and Pakistan has endured more than three years, which had never happened before.

This appears to be the Manmohan Singh government's policy, too. It is no secret that the back channel is briskly busy and talks between the union government and the All-Party Hurriyat Conference are also in the offing. Both these efforts are worthy of being continued.

Inder Malhotra is a former editor of The Times of India. This piece appears in Outlook Saptahik dated January 1, 2006, now on the stands.