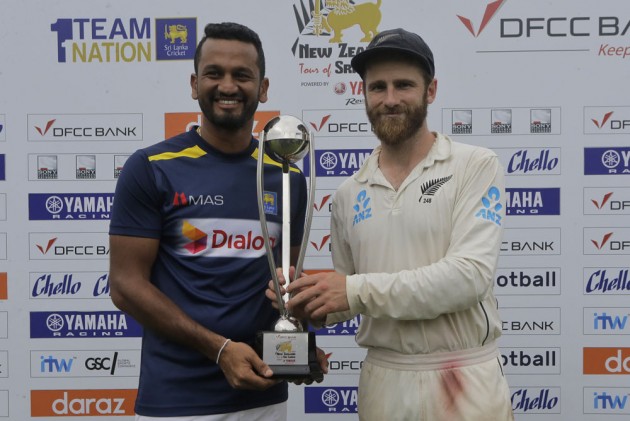 New Zealand routed Sri Lanka by an innings and 65 runs in the second Test to secure a 1-1 series draw in Colombo.

BJ Watling joined Tom Latham in bringing up three figures at a P Sara Oval once again sodden by rain and the tourists declared on 431-6 – a first-innings lead of 187.

Needing to bat out the rest of proceedings to secure a draw, Sri Lanka's top order proved wholly ill-equipped for the task at hand as they slipped to five down by Lunch.

Niroshan Dickwella held up the inevitable with 51 but a superb collective effort from New Zealand eventually overwhelmed his team, Trent Boult, Tim Southee, Ajaz Patel and William Somerville taking two wickets apiece in 122 all out.

Overnight rain delayed the start of the final day but Watling (105 not out) was in the mood to make up for lost time.

Colin de Grandhomme top-edged Lasith Embuldeniya out of the rough to be caught by Lahiru Kumara for 83, but Watling continued uninhibited – advancing down the track and cracking sweeps and reverse sweeps on his way to three figures.

Southee blasted an unbeaten 24 from 10 deliveries, including two fours and two sixes, and Kane Williamson called his side in after they had added 49 in five overs.

What a servant he's been for New Zealand cricket over the years - he now has the most wickets by a Black Caps bowler against Sri Lanka in Tests!#SLvNZ pic.twitter.com/uj460VQhMN

Lahiru Thirimanne's run out saw Sri Lanka begin their attempt to save the game in dismal fashion before Kusal Perera slashed Boult behind to Watling.

Yet skipper Karunaratne - not able to bat higher than seven after suffering a quadricep tear - padded up to be dismissed lbw by Southee for 21, ending a 70-ball stay and handing the New Zealand seamer a 250th Test wicket.

Dilruwan Perera was caught in the cordon driving to give Southee (2-15) his second scalp before tea, but Dickwella still remained.

However, the wicketkeeper's 161-ball vigil finally came to an end when Latham snaffled him at bat-pad off Patel - Suranga Lakmal having departed in a similar fashion to Somerville.

It left the magnificently miserly Boult (2-17) to dispatch Lasith Embuldeniya with a fierce lifter he could only glove to a gleeful Williamson.