Under PM Modi’s government, with his relaxed attitude towards industry as well as increased consumption of the ‘aspirational middle class’, the air pollution is about to take a quantum leap 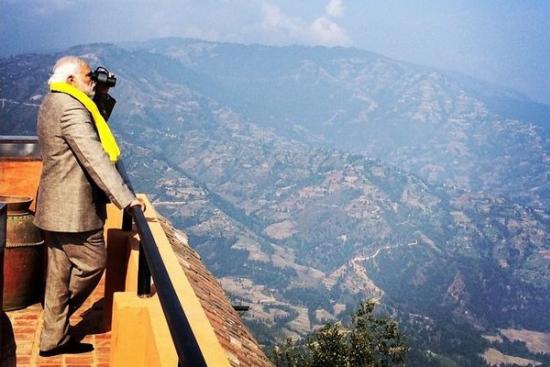 On Thursday morning, India’s Prime Narendra Modi was looking out across Panchkhal Valley from the SAARC summiteers' retreat in Dhulikhel, just east of Kathmandu. Through his binoculars, India’s Prime Miister was looking north towards the Himalayan ramparts whose ridgeline makes the border with Tibet/China 20-30 miles away—the chains of Jugal Himal, Ganesh Himal, Gauri Shanker and Langtang Lirung.

But Mr Modi did not see the Himals, because all of the Nepal mid-hills that morning was shrouded in haze that kept visibility down to a few miles. When the wind comes in from the Tibetan plateau, the skies are crystal clear and mountains can be seen far and wide, from the Annapurnas to Khumbu Himal (including Everest). But at other times, except during the monsoonal Easterlies, Nepal gets Westerlies that bring the haze.

Satellite imagery shows that the Westerlies carry atmospheric dust from Sindh, Rajasthan, both the Punjabs, Haryana and Western UP to envelope the Himalayan midhills. The quotient of the haze must have risen in the past decades with increase in winter (canal-irrigated) agriculture, and also the burning of stubble in the fields after the post-monsoon harvest ('biomass combustion'). Dust/soot is kicked up from unpaved roads and construction, brick kilns, smokestack industries, vehicle and generator emissions and coal-fired electric generation plants (fossil fuel combustion).

Under PM Modi’s government, with his relaxed attitude towards industry as well as increased consumption of the ‘aspirational middle class’, the air pollution is about to take a quantum leap. India is opening up more of its low-grade coal seams for mining, which is a matter of subcontinental as well as global concern.

All of this is (and will be) adding to the ‘Asian Brown Cloud’, which is casting a pall over South Asia. Dust and soot are settling on Himalayan ice and glaciers as never before, absorbing the sun’s radiation and accelerating the melting. (Search for 'Asian Brown Cloud' satellite imagery on Google.) In the plains, in winter, the pollution is adding to extended periods of fog (‘seet lahar’) under which tens of millions of the poorest suffer.

All of this constitutes the lesser discussed aspect of the ‘climate change’ discourse, but it impacts every aspect from from public health to tourism. (Let us also remember the Maldives President’s exhortations on climate change at the 18th Kathmandu Summit just ended, as well as the Bhutan Prime Minister’s report that less snow was falling not only in the valleys but the mountains of Druk Yul.)

We know PM Modi has a special affinity for the Himalayas, from his earlier days as a spiritual seeker in the upper reaches of Uttarakhand and (we hear) Nepal. That is probably why he was searching for the mountain peaks from his Dhulikhel eyrie. PM Modi and his advisors will need to study the connection between the invisibility of the Himalaya from Dhulikhel last Thursday with the policy that India, as South Asia’s largest economy/state, needs to adopt urgently to reverse trends that will impact the lives in our vast subcontinent.

Kanak Mani Dixit is a Nepali publisher, editor, writer and the founder of the news magazine Himal Southasian. This post first appeared on his Facebook page under the title, "Why Narendra Modi did not see the Himalayan snows from Dhulikhel..." and is reproduced with permission

Ahead Of Its IPO Today, MapMyIndia Bags Rs 312 Crore Funding. Should You Subscribe?