The act of wiping the shoes of a Chief Minister by a retired police officer serving as a security officer is attracting criticism needlessly. It is the distinctive way of the Indian Police to speak truth to power. 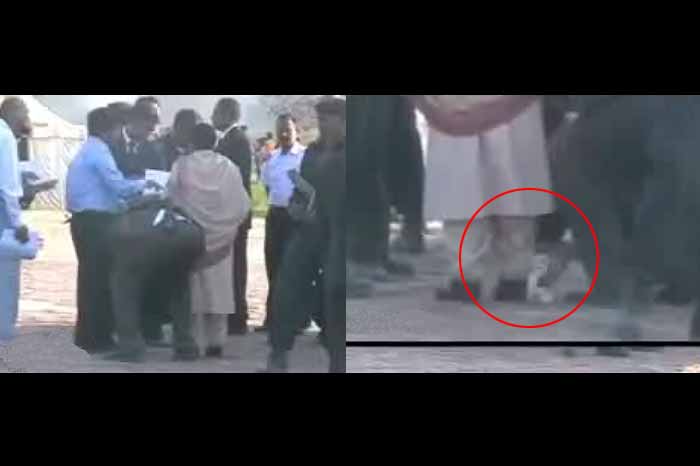 I have never had the privilege of serving with you, but if I ever get the opportunity to meet you I would like to kneel and kiss your hand. You represent the pinnacle of 64 years of evolution of policing in modern India. Your one act of wiping the shoes of Chief Minister of Uttar Pradesh, shown on national TV, will go down as the one moment when all the confusion cleared and all the policemen wearing khaki realized the path to their tryst with destiny. So far many of us were living a lie. Thank you for showing us the truth.

The last 64 years, the police in India, so valiantly and ably led by the IPS — of which yours truly has been, for the last 16 years or so, a serving member — have been trying to act in a manner completely contrary to their genetic makeup. From 1861 to 1947, the British Raj gave us such an efficient and workable model of professional policing. The precepts were so simple. Know thy master, protect your master’s interests, attack his enemies, and prey on the poor and the powerless with liberal doses of brutality and corruption and you will be valued and trusted and thrown the occasional bone to make you feel special. It is a pity that since Independence, some misguided souls in the police and in the public at large, misguided by silly notions of equality, rule of law and serving the poor and the helpless, let that little document called the Indian Constitution get in the way of finding our true calling that you have so gloriously revealed to us. Despite 60 odd years of Independence, some things have not changed, or ever will. After all, even today, there are only two types of citizens in our country. Those whom the police need to fear and obey, who aren’t that many in number, and then the vast multitudes who need to fear and obey the police to lead a life with even a modicum of dignity.

Frankly I don’t see why there is such an outcry at your gesture. Not only have you proclaimed the loyalty and utility of the police force in this country, you have also given us the most effective demonstration in the dignity of labour and social justice that no slogans or political posturing, even from the lady you so visibly served, could ever achieve. In any case what you have done is simply lift the veil on a practice that has been going on in our police forces across the country for some time now. Even serving DGPs are known to prostrate themselves before Chief Ministers and Home Ministers, and you are merely a retired DySP. In fact I think you have only performed the duty expected of you. Imagine if the dust you had cleaned from the shoe had ended up clogging the respiratory system of the power you serve. For people with the wrong allergies, dust can be lethal at times. One shudders to think of the possibility that perhaps her enemies might have planted radioactive dust on her shoes. You acted with an alert mind and abundant precaution sir and for this you should be saluted. One sneeze from the lady and whole of Delhi might have frozen stiff!

The Indian Police is, thanks to you, the shining example of devotion to duty and the torchbearer of dignity of labour in our country now. Let no one say we don’t embrace this idea with heart and soul. No task is too menial or beneath our dignity, as long as the task is commissioned by someone who is truly powerful. After all we are a service-oriented profession, catering to a select group of powerful politicians, senior judges, high ranking bureaucrats, business tycoons and maybe an occasional eminent citizen, such as a cricketer or a film star. The rich and the powerful have the position and the disposition to appreciate our services. For the rest we are quite simply the Dark Side of the Force.

So what if we can’t successfully prosecute a few sensational murder cases? So what if we seldom ever get convictions in cases involving high level corruption? So what if victims of religious riots and terror attacks have to wait forever for justice? These are rituals and routines for public consumption. Those in the know, simply ask us to kneel and put out their shoe. Mr Kalmadi and Mr Raja should compare notes with Mr Ramalinga Raju. He’ll tell them not to worry. Their human rights will be respected in full accordance with the Geneva Convention. Our shoeshine duties leave so little time for uncovering billions of rupees of misappropriated public money. In any case it is so much more fun beating up rickshaw-wallahs and coolies to hear their helpless screams and to grab their hard earned meagre daily wages. Helps us shine a better shoe.

What does the public know? We know which part of the shoe is to be polished and which part is to be licked. Let a lap dog disappear from one of the well-manicured bungalows of Lutyens’ Delhi. In no time at all the best sleuths in the country will be on the case and it will be solved. Our masters know what we are good for. And so do we. Protecting their person and their favoured cronies and kith and kin from the petty inconveniences of every day life, safeguarding their ill-gotten gains from the public gaze. This is our God given mission and we do it well, all this while somehow finding the time to keep their shoes dust free.

Now that we know what is publicly expected of us, perhaps we should formally incorporate it into our training and standard operating procedures. Police academies across the country needlessly place emphasis on tactics, arm-drill, horse riding, baton drill, sword drill, and similar such outdated skills when they should really be teaching us the shoeshine drill. Perhaps the day is not far when along with the cap, the lanyard and the whistle, the shoeshine brush is made an integral part of the police uniform. Like the Sam Browne Belt, the Padam Singh Brush would inspire generations of policemen to perform their duty to shining perfection.

My 8 year-old son seems to have the wrong notions about the police profession. He seems to think that the police exist to serve the poor and the weak, they exist to solve crime and make law abiding citizens feel safe and secure, they exist to fight corruption and enforce the rule of law without fear or favour. I would like to bring him around to meet you sometime. Maybe you can teach both of us how to shine a perfect shoe. Belonging to someone powerful.

Abhinav Kumar is a serving IPS officer. These are his personal views.