Vaghela, who had engineered a revolt of sorts in the opposition Congress last month, said the people were fed up with the BJP and the Congress, and were desperate for an alternative. 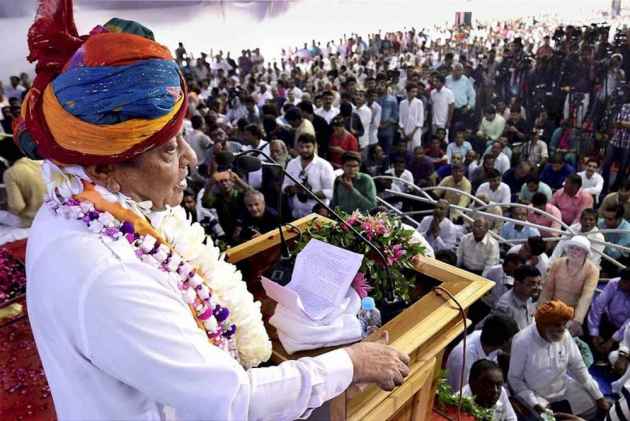 Former Gujarat Congress strongman Shankersinh Vaghela today announced that he will lead a new political 'front' which will contest all seats in the upcoming assembly polls.

Vaghela said the front 'Jan Vikalp' was floated by some city-based "professionals", who approached him to provide an alternative to the ruling BJP and the opposition Congress in Gujarat, and claimed a number of people wanted to see him as the chief minister.

The 77-year-old former chief minister, who recently quit the Congress apparently as the party was reluctant to name him the chief ministerial candidate for the upcoming election, made the announcement about his much-awaited next political move at a press conference here.

Vaghela claimed the people associated with Jan Vikalp had conducted a survey and found that most respondents wanted to see him as the next chief minister of Gujarat.

The survey "revealed that people are highly dissatisfied with both the parties. A large number of people said I should be the next chief minister.

"When these professionals conveyed this to me, I decided to extend my support to it. They asked me to be with them and lead this front," Vaghela said.

"This is not a party, it's a front which will become the voice of people who are unhappy with the system. I hereby announce my support to Jan Vikalp, which will raise issues concerning farmers, women, traders and unemployed youth. We are planning to field our candidates on all the 182 seats," said Vaghela.

He claimed he will not contest the assembly polls due later this year. However, when asked if he would become the CM if Jan Vikalp garners a majority, Vaghela didn't rule out such a possibility.

"I had already announced that I am not going to contest the polls this time. Let's see what happens after the polls. I will consult you (the media) if a such situation arises," Vaghela said.

According to him, Jan Vikalp will not have a "high command system" prevalent in other parties.

"There will be no high command. Local representatives of our front will choose our candidates. We will follow the primaries system of the United States, where party workers select their candidates, not just one leader. Aspiring candidates can directly approach our local committees."

Arvind Kejriwal-led Aam Aadmi Party has already announced that it will contest the Gujarat assembly polls. The announcement by Vaghlaa, a Kshatriya leader who quit the BJP in 1995, is likely to further affect the election dynamics in the state.

When pointed out that third front players have not been successful in Gujarat's largely bipolar political system, the Kshatriya strongman exuded confidence that Jan Vikalp will emerge victorious at the hustings.

"It is a myth that third front does not work here. There are many states such as Delhi, Kerala and West Bengal where third fronts have been successful. In Gujarat too, Chimanbhai Patel (a former Congress leader) formed government through a third front," said Vaghela.

The BJP has been in power in Gujarat since 1998 and it is important for the party that it maintains its hold on the home state of Prime Minister Narendra Modi when it goes into the 2019 general elections.