30 April 1999 to December 18, 2006 — it is seven years and some eight months when Jessica Lall was sensationally shot dead in the presence of Delhi's rich and the powerful. An overview. 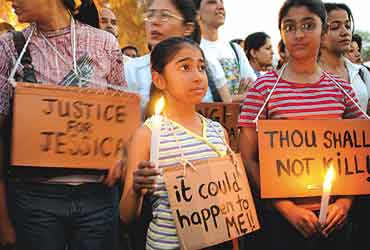 21 February 2006: Manu Sharma, the prime accused, and all the other eight accused are acquitted by the Delhi court which held that the police had failed to prove its case. Delivering the verdict, Additional Sessions Judge S L Bhayana said the accused had to be acquitted as three key eye witnesses -- model-turned actor Shayan Munshi, Karan Rajput and Shiv Das, the electrician at the restaurant where the model was shot dead -- had turned hostile. Others acquitted in the case are Vikas Yadav, Manu's uncle Shyam Sunda Sharma, Amardeep Singh Gill and Alok Khanna, both former Coco Cola execctives, cricketer Yuvraj Singh's father Yograj Singh, Harvinder Singh, Vikas Gill and Raja Chopra.

2 December 2003: The Supreme Court dismisses Manu Sharma's bail pleas and laments that in the present day society even if a murder takes place before a large gathering no one comes forward to help the prosecution.

31 October 2002: Prosecution fails to produce another eyewitness, Dinesh Kumar, a Nepalese citizen who had left India after the murder, after Nepalese authorities decline to serve summons to him stating that there was no such provision in the Kingdom's law to serve summons issued by a foreign court on its citizens.

28 may 2002: The Delhi High Court further extends the interim bail of Manu Sharma till August 1 with a warning that it would be cancelled immediately if he made an attempt to tamper with the evidence or influence the witnesses.

20 March 2002: Nine days after his surrender to the trial court, the Delhi High Court once again grants two-and-half months' bail to Manu Sharma.

25 January 2005: The Delhi High Court grants interim bail of six weeks to Manu Sharma but directs him not to leave India and to stay away from the National Capital Territory during the bail period.

16 January 2002: Another prosecution witness Gajender Singh, a manager in Hotel Siriska Palace, Alwar, turns hostile after refusing to identify Vikas Yadav. Singh in his earlier statement to the police had said that Yadav had stayed in the hotel on May 9-10, 1999 under a fictitious name Suresh Shekhar.

7 January 2006: Fashion designer Rohit Bal stands by his statement that he had telephoned the police when the model was shot dead.

17 October 2001: Fashion designer Rouble Dunglay turns hostile by retracting from a statement he had made to the police about the events on the night the ramp model was shot. He says that he had not actually seen Bina Ramani, but had heard a voice saying that Jessica Lall had been shot.

12 October 2001: Bina Ramani identifies Manu Sharma as the person whom she had tried to prevent from escaping after the model was shot at her Tamarind Court restaurant.

7 September 2001: Navin Chopra, owner of a gun shop from Karnal, identifies that a person named Siddharth had purchased 25 rounds of point 22 bore ammunition from his shop on February 4, 1999. Another witness, Gurnam Singh an arms licencing department official in Chandigarh also verifies that Manu was issued licence in 1998.

4 September 2001: In view of the Delhi High Court order that the trial of the case be completed expeditiously, the trial court fixes day-to-day hearing on the matter.

6 July 2001: Malini Ramani "categorically" identifies accused Manu Sharma as the guest who had asked for drinks after the bar had closed on the night of April 29, 1999, at her restaurant, Tamarind Court.

17 May 2001: Vikas Yadav, accused of destroying evidence in the case, is sent to judicial custody following expiry of the period of his interim bail. He is granted bail four days later.

3 May 2001: The prosecution in the Jessica Lall murder case suffers its first major setback when Shyam Munshi, an eyewitness to the murder, who had earlier physically identified Manu Sharma, states in court that Manu Sharma was not the person who had shot Jessica.

3 August 1999: The Delhi Police indicts Manu Sharma, Vikas Yadav and 10 others in the Jessica Lall murder case in its chargesheet filed in the court of Metropolitan Magistrate V K Khanna. Manu Sharma, is charged under sections 302 (murder), 201 (destruction of evidence), 120(b) (criminal conspiracy) and 212 (harbouring suspects) of the Indian Penal Code and sections 27, 54 and 59 of the Arms Act. The others accused are member of Parliament D P Yadav's son Vikas, Coca-Cola Company officials Alok Khanna and Amardeep Singh Gill, Shyam Sunder Sharma, Amit Jhingan, Yograj Singh, Harvinder Chopra, Vikas Gill, Raja Chopra, Ravinder Krishan Sudan and Dhanraj. They all are charged under sections 120(b), 302, 201 and 212 of the IPC.

17 May 1999: The Delhi High Court issues show-cause notices to the union home ministry and the Delhi government on a petition seeking the transfer of the Jessica Lall murder case to the Central Bureau of Investigation in view of the 'high profile nature of the case'.

19 May 1999: Vikas Yadav armed with an anticipatory bail from an Imphal (Manipur) court, ''surrenders'' at the police headquarters in New Delhi.

10 May 1999: Joint Commissioner of Police (New Delhi range) Y S Dadwal, who had visited the restaurant where model Jessica Lall was shot dead on April 30, is relieved from his post.

8 May 1999: Socialite Bina Ramani, her husband George Mailhot and daughter Malini Ramani are arrested under various provisions of the Excise Act including running an illegal bar at their restaurant and employing a woman bartender for serving liquor but are released on a surety of Rs10,000 each and a bond of like amount by the duty magistrate at the Patiala house courts.

6 May 1999: Manu Sharma surrenders to the Delhi police in Chandigarh on the "advice" of his father.

3 May 1999: Manu Sharma's father and and former Union minister of state for food and civil supplies Venod Sharma, and his entire family is reported "absconding" by the Delhi Police.

2 May 1999: Delhi Police claims Manu Sharma fired from his .22 pistol revolver registered in his father's name.

30 April 1999: Jessica Lall, a model, who was serving as a bartender at a crowded Tamarind Court, a high-profile celebrity hangout in New Delhi, is shot in the temple, allegedly by Manu Sharma alias Siddharth Vashist (son of former Congress MP Venod Sharma, who is now a minister in the Haryana government) at around 2 am after she reportedly refused to serve him a drink. She is rushed to Safdarjung Hospital and later to Apollo hospital where she dies. Delhi Police identify Vikas Yadav, son of UP MP DP Yadav, as Sharma's accomplice. As per police enquiries, the two, along with Coca Cola executives Alok Khanna and Amardeep Singh Gill, had bought coupons for liquor (Tamarind Court was owned by well-known socialite Bina Ramani and did not have a liquor licence) and just when the "private party" was about to end, Manu Sharma is said to have asked for drink, but was refused, and had got into an argument with Malini Ramani, daughter of Bina Ramani, who was also bar-tending. He reportedly offered a lot of money extra for the drink and had then gone over to Jessica Lall, the other bartender, who also refused to serve him a drink. That is when he is said to have shot two fires, one of which hit Jessica.