He termed "all these attempts as futile, saying it is nothing more than a tactic to buy time by New Delhi." 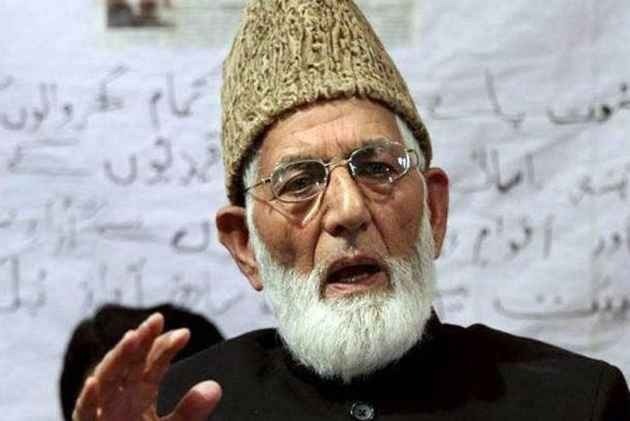 Senior separatist leader and chairman of  his faction of All Parties  Hurriyat Conference chairman, Syed Ali Geelani Thursday claimed he rejected talks "offer with India by an IB official".

He termed "all these attempts as futile, saying it is nothing more than a tactic to buy time by New Delhi."

Geelani said  on Thursday night an IB official proposed a dialogue between New Delhi and himself.

However, Geelani said, he refused to talk. He said  until the Kashmir dispute is addressed in its historical perspective. He said India should to acknowledge the disputed status of the Kashmir and begin demilitarization to hold a referendum.

Geelani said "Kashmir issue has turned into a flash point and unless India accepts its disputed nature, no progress is expected and horrors of war will haunt people living in sub-continent." He said "people of J&K are peace-loving, and Indian leaders can play a key role (in resolving the issue) by respecting their aspirations, instead of adopting coercive measures."

Geelani told IB official, "India should shun fanatical politics because the need of the hour is to acknowledge the ground realities of the long-pending Jammu and Kashmir dispute."

"Kashmiri people have never accepted or acknowledged the forced occupation of India and they are at war with this country (India) for the past seven decades", Geelani told the official.

"We time and again demanded that people should be allowed to express their aspiration about political future and destiny of state," Geelani said.

Geelani said  "to continue its forced military occupation, India is not only inflicting worst oppression and atrocities upon the Kashmiri nation but this country is supressing our youth and killing them on mere pretext."

"Since past seven decades hundreds and thousands of people were mercilessly killed by Indian forces and lakhs of people were forced to migrate while as hundreds are languishing in detention centres and in jails, Geelani said. It is horrific to see thousands of those maimed with pellets and other lethal weapons",  Geelani told  unnamed  IB official.

Geelani said "India instead of adopting the political and sane approach is following coercive measures and carrying bloodshed to cow down our political aspirations."

“I, with a sincere heart, want to convey that we are yearning for peace and seek peaceful resolution to the long- pending (Kashmir) issue,” Geelani said.
"We are not against the dialogue process, but we favour only meaningful and result-oriented negotiation.

“For any Kashmiri to be part of this futile exercise will only undermine our internationally acknowledged legitimate and just struggle, nourished by the blood of our martyrs and great sacrifices and hardships rendered by the masses”. Geelani said.

Geelani told intelligence officer  in present " indifferent, apathetic and appalling situation no talks will prove fruitful and result oriented, hence it is responsibility of Indian leadership to prepare conducive atmosphere for talks between all its stakeholders including Pakistan."