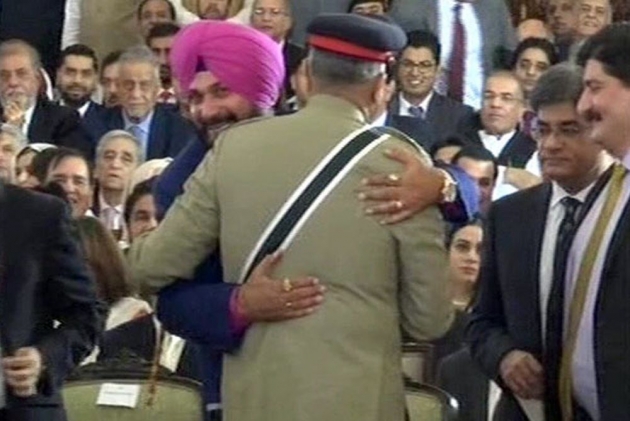 Days after a plea was filed seeking a sedition case against cricketer-turned-politician Navjot Singh Sidhu for hugging Pakistan army chief, a local court on Friday asked the complainant to appear before it next week with relevant documents and evidences.

Taking cognizance of the petition filed by advocate Sudhir Kumar Ojha, the chief judicial magistrate Hari Prasad said he will personally look into the matter and fixed August 29 as the next date of hearing.

In his petition filed on August 20, Ojha had urged the court to issue directions for registering a case against Sidhu under the IPC sections relating to sedition, making imputations and assertions prejudicial to national integration and insult with intent to provoke breach of peace.

The complaint followed Sidhu hugging General Qamar Jawed Bajwa on the sidelines of a function where former Pakistan cricket captain Imran Khan was sworn in as Pakistan's new prime minister on August 18.

Sidhu, was slammed by several BJP leaders and others for the hug hugging Bajwa at Imran Khan’s swearing-in on August 18, had stoutly defended his gesture saying it was an "emotional response" on learning that Sikh pilgrims may now be allowed to visit the Kartarpur shrine in Pakistan. Imran Khan had also tweeted in support of Sidhu, saying those criticising the Punjab minister were doing a great disservice to peace in the subcontinent.

In his complaint, Ojha however alleged that General Bajwa was responsible for beheadings of Indian soldiers and Sidhu, by his gesture, had insulted the family members of the martyrs.

He also took exception to Sidhu's visit to Pakistan when the nation was mourning former Prime Minister Atal Bihari Vajpayee's death just a couple of days ago.

The former test opener, who began his political career with the BJP, is now with the Congress and is a minister in the Punjab government.