So what's the latest? That there is no deal with Musharraf but that Benazir would "work with him"? But only for "wider interests" of Pakistan and for its "transition to democracy", needless to say. 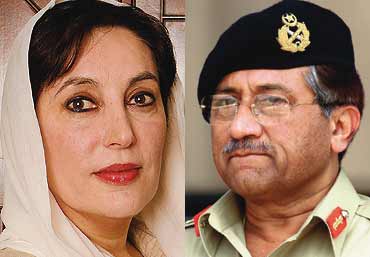 Sometimes one feels that despite the deepest differences between India and Pakistan, the basic unity of the subcontinent is intact. In both countries - and also in Bangladesh, for that matter - most politicians are embodiments of crass opportunism, and military rulers of Pakistan (and Bangladesh) would cynically do whatever suits them for the time being. This alone can explain the glaring contradiction between angry denials of an impending deal between them by General Pervez Musharraf and the PPP leader, Benazir Bhutto, and her latest, four-hour interview to The Times of London in which she has unabashedly declared that after Musharraf has got himself re-elected president, she would be happy to be his prime minister. And, as was to be expected, she has attributed this willingness only to "wider interests" of Pakistan and for its "transition to democracy".

Up to the time of writing, there has been no comment on Benazir's verbal somersaults from the country's military ruler. But whatever he and his cohorts might eventually say, the unfolding Pakistani scenario is becoming clear enough. So let us ignore the outpouring of words and go by the situation on the ground.

Even when Musharraf and Benazir, in separate speeches in different parts of the world had rubbished reports about an impending deal between them, those in the know had laughingly said that the two leaders were technically right but actually wrong. There are a few things no one can deny though one must remember that neither of two principals wants to set anything in writing or announce it publicly.

In the first place, serious talks between the two sides have taken place since 2003 although the intermediaries have changed - from the head of Pakistan's chief of Military Intelligence, Major-General Taj to Musharraf's most trusted aide, Tariq Aziz, who represents him on the "back channel" with India, too. Secondly, the US has been actively promoting the understanding, arguing that both Musharraf and Bhutto have common stakes in fighting the "rising tide" of Islamic fundamentalism. Interestingly, a former British high commissioner to Islamabad, Sir Mark Lyall Grant, got so deeply involved in the attempts to "broker the deal" that he was nicknamed the "principal mediator".

Thirdly, and most importantly, Benazir surprised friends and foes alike by welcoming Musharraf's Protection of Women Bill, and he reciprocated by summarily transferring the main anti-Bhutto investigator into charges of corruption against her and her husband, Asif Ali Zardari. She is now sufficiently sure that this Sword of Damocles would be removed from above her head. For Musharraf' this is a small price to pay for his one-point agenda - to get himself re-elected president while retaining his right to wear his military uniform.

One reason why Benazir has chosen to give such an elaborate interview to The Times is that she, like Musharraf, needs to persuade her followers to accept her game plan that has caused resentment among them. As for the Musharraf camp, the joke in Islamabad is that from Prime Minister Shaukat Aziz down, everyone looks "shell-shocked" and is looking for a "redundancy package".

Although the higher military echelons are manned by Musharraf loyalists, some of them are strongly advising him that Benazir should be allowed to come to Pakistan only after the next general election is over, and that she should under no circumstances be allowed to take part in the election campaign. Her hope of becoming prime minister must depend therefore on the expectations that her lieutenants would win the poll for her.

On the day Benazir had categorically repudiated any idea of a "deal or an alliance" with the military ruler, she seemed worried about the consequences of the unexpected "judicial crisis" that has erupted in Pakistan. It has weakened Musharraf and created uncertainty about the future. The "suspended" Chief Justice Iftikhar Mohammed Chaudhry has become a national hero and a symbol of integrity and courage in facing all the pressures of the military regime. Who could have thought that the entire legal community of Pakistan would take to the streets against the government action, or that Iftikhar Chaudhry's motorcade would take nine hours to traverse the short distance from Islamabad to Peshawar because of the huge crowds all along the route? Her interview suggests that she is convinced that Musharraf has weathered the storm.

Against this backdrop the likely scenario in Pakistan is expected to be around following lines. Come October, and Gen. Musharraf would almost certainly get re-elected for five years with the right to wear his military uniform. This is too much for Benazir and the PPP to accept wholesale. So Musharraf is prepared to make three additional concessions. First, that after the existing assembles have re-elected him, fresh elections would be held immediately, and he would need the endorsement of the newly elected houses for his continuance as president. Secondly, on the sensitive question of his continuing to be the Army Chief, he promises to show "flexibility" at the endorsement stage, not earlier. Thirdly, he vows to form a broad-based government after the fresh election.

The earlier idea of having a Musharraf nominee as prime minister and a PPP leader, other than Benazir as deputy prime minister, has obviously been given up, as for as the PPP leader is concerned. Although all the generals holding higher positions are Musharraf's protégés, he is aware that even they might resent his being both president and army chief for too long a period. So he has decided three senior posts to assuage them. Up to now, corps commanders were next only to the Chief of the Army Staff to whom they reported. Hereafter, there would be three posts of Army Commanders between the army chief and the corps commanders.

Inder Malhotra is a former editor of The Times of India. This piece appears in Outlook Saptahik dated April 14, 2007