Running With The Hare...

Modi came through as the one who was leading from the front, unmindful of the tremendous odds ranged against him. Patel, on the other hand, seemed as someone trying to have his cake and eat it too. 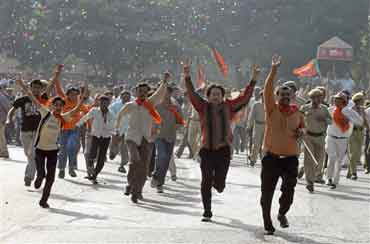 A BJP victory was always on the cards. But perhaps even the BJP supporters weren't  quite prepared for this clear a mandate. As an upbeat BJP went into celebration mode, utter despondency gripped the Congress in Gujarat after the results of the Vidhan Sabha elections depicted a comfortable continuation of Narendra Modi in governance for the third time in succession.
It was no surprise really that jubilant BJP workers would take to the streets in droves celebrating with the bursting of fire crackers and the distribution of sweets. And they did, taking over Ahmedabad, as it were, in the process.

If the crowd at the state BJP headquarters in Ahmedabad swelled by the hour, the enthusiasm at the state camp of the opposition Congress dwindled in direct proportion as the day wore on. Narendra Modi himself decided to soak in the glow of a hard fought election battle and subsequent victory by scheduling a public meeting in the labour dominated Khokhra Mehmdavad suburb of Ahmedabad on Sunday evening. He will be sworn in at a high profile ceremony on December 27.

While most people in the state were betting on Modi’s return to power, the general feeling was that it would be with a considerably whittled down majority against the previous best of 127 in a House of 182. However, with Modi virtually single handedly propelling the party to a figure in fair proximity to the previous best, the results have only gone to add to his seeming  invincibility. "We were very sure that our chief minister will deliver Gujarat to the party with stellar honours”, said the BJP spokesperson in Ahmedabad on Sunday. But perhaps they did not think that it would be with as many as 117 seats.

If the Congress got its calculations wrong Modi seems to have worked his mathematics well.  The Congress had worked to weld opposition against Modi by weaving the dissidents opposed to him into its own fabric. The dissidents led by former chief ministers Keshubhai Patel, who has since been served a notice by the party, and Suresh Mehta, who has already quit, had worked hard through a high voltage campaign to turn farmers and notably the Patels against the BJP.

Saurashtra region where the dissidents had worked tirelessly, was the area which was expected to turn the tide against the BJP while the reclaiming of central Gujarat was expected to put Congress firmly in the saddle. In hindsight, it is now clear that the Patels in Saurashtra did not bite the bait, while North Gujarat went overboard in accommodating Modi -- even uprooting many of the Congress sitting legislators. Central Gujarat did return to the Congress fold but the numbers did not add up to offset the losses that the party suffered elsewhere.

The results are clear in that the BJP rebels have been rejected by the electorate. That they chose to make common cause with the Congress targeting Modi did not go down well with the voters in Saurashtra, it would now appear. It is this miscalculation by both the Congress and the rebels that has cost the Congress dearly, says Rajkot based journalist Mukesh Vyas.

Political observers in Saurashtra also believe that it is Keshubhai Patel’s dilly-dallying that created a credibility problem for the dissidents in their own stronghold. Modi came through as the one who was leading from the front, unmindful of the tremendous odds ranged against him. Patel, on the other hand, seemed as someone trying to have his cake and eat it too. He remained within the BJP and yet sought to undercut the very party he was with rather than decisively opting for the opposition. This did not show him and some of the other rebel leaders who adopted a similar approach in fair light. To use another cliche, by running with the hare and hunting with the hound only destroyed their own credibility.

No wonder, most who pitched into the fight whether as independent or as part of the Congress have been worsted. Former chief minister Suresh Mehta is unrepentant even as he admits that the dissidents have failed to dent Modi’s support base. "Perhaps we were not able to convince the people enough to make them see the truth. But then lies repeated over and over again do not become the truth. Time will tell and we will also redouble our efforts”, he maintains defiantly.

Mr Shankersinh Vaghela, union textile minister and oldtime political foe of Modi also felt that a review of the Congress effort and strategy will need to be done to pinpoint the areas of weakness and make amends accordingly”,he added.
Modi on the other hand , calculated well and truly the future course of action.His targeting of women and youth as the most potent part of his armoury to battle his rivals has been bang on target.When the dust of the fight has settled and the figures are analysed, it will be found that Modi had made significant inroads in winning over the youth and the women voters.Both made up in enthusiasm what they lacked in political education.