Right Up Our Alley

The Eden was a very un-Indian kind of strip. Shaun Pollock must have been licking his lips and offering words of gratitude to the groundsman. 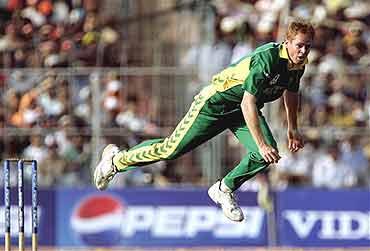 Matters, not of bat or ball, have made headlines from Kolkata.

It does become a result foretold if the coin does not land up your side. Everything else is taken care of by uneven conditions in two halves of the day. Dew is the king and you do his majesty's bidding.

Toss is a matter of luck and not skill and we all know which ingredient should be deciding a game. I remember a final in Mumbai in the '90s when just a look at the wicket and we knew without the toss we were doomed.

It was not dew as much but the sheer state of wicket which forewarned the perils of batting second on a crumbling pitch. It was a sight to see Venkatesh Prasad resort to bowling leg spin and slower ones which were rearing and sailing over batsmen's heads!

It brings to question the very issue of day-night games. Such matches have a social value in Australia or in South Africa where families can hop on to their bandwagons and head for cricket stadiums for their evenings out, especially on weekends.

That in essence has been the spirit of day-night games. We too in South Africa are inconvenienced at times like in March-April, especially in up country, where winter sets in early. It gets dark early and if you are playing Australia, in March-April, it knots you up in the guts.

But possibly there is no need to package one-day games in the sub-continent. Hundred thousand in any way are going to turn up at the turnstiles. The only concern should be that they get a good game, an equal game. Hold a day game, start it early in case you still want a day-nighter or make it 25-overs each for two sides in two innings so they get equal conditions.

But I guess authorities have been busy dressing up the one-day games in Power Plays and Super Subs of late to worry about such inconveniences.

Then it was the wicket. It was a very un-Indian kind of strip and I was very, very surprised. Indians do not play their cricket on such kind of wickets, they prefer the flatter types where spinners come into business and even fast bowlers are conditioned to bowl in a certain style. But this one was right up South Africa's alley. Shaun Pollock must have been licking his lips and offering words of gratitude to the groundsman.

If indeed it was Kolkata's way of showing their anger at the omission of their most beloved son from the squad, it was strange and sad. A region or a country should not lose purpose or the bigger goal and must plan accordingly.

It was also uncharacteristic to see so full-throated support for the South Africans on an Indian ground. Feelings do run deep in this part of the world.

The footnote of cricket still must be recorded. The Indians needed to adjust to play in conditions which did not suit them. It should have been a slow start upfront where you do not try to do too much but they preferred to walk up to the trouble straight up. Guys like Sachin Tendulkar should have chosen to adjust.

Graeme Smith's century also cannot be glossed over. It was one of his finest and he was unbelievably clinical. He is an exceptional batsman and I have little doubt he would end up as one of the top three batsmen ever we have produced. He is certainly heading that way. He played positively and put the fast bowlers under some early pressure.

Indian fast bowlers also did not bowl particularly well and Ajit Agarkar could not get his line right. Rahul Dravid was expecting his seamers to get them in early but Smith settled it in the first 20 minutes.

Charl Langeveldt too is making a good pitch for himself in our one-day plans. He had a good tour to the West Indies this year and has continued to work his way up. He is a good seam and swing bowler who is prepared to pitch fuller and run the risk of being hit for fours. His speed is in the 130s which is just enough on any surface and certainly a handful on a deck like the one in Eden Gardens.

It is a moment to savour if you walk away with a 10-wicket win in front of 80,000 fans away from home. They cannot lose the series and Mumbai could give them a historic triumph. That is if the matter of toss is negotiated well there too.