The Maoists have, no doubt, acquired power and a certain status through the barrel of their guns. But they will eventually need to have their legitimacy and status endorsed by the people through a peaceful electoral process. 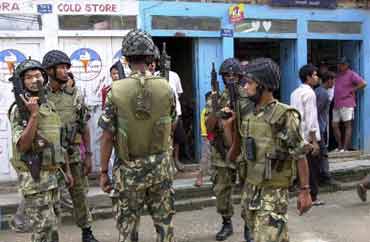 All hopes and wishes for a peaceful resolution of the Maoist conflict were razed to the ground last week when Maoist 'supremo', Prachanda, called off the peace process and the truce which had been in effect for the past seven months. Prachanda's call was implemented by his armed guerrillas in the capital city of Kathmandu and in far flung areas, provoking the government to declared the Communist Party of Nepal (Maoists) a terrorist organization, giving a liberal mandate to the security agencies to deal with them.

The Maoists seemed well prepared, at least for the time being. On Thursday, three armed Maoists shot and killed one of the country's most celebrated Army Officer - Col. Kiran Bahadur Basnyat in Kathmandu - as he was about to get into his jeep. Basnyat was being tipped to shortly head a battalion charged with looking after security arrangements in the capital and keeping a tab on Maoist activities, after his promotion to the rank of Brigadier General,. Three bullets pierced his temple and other vital organs, and Basnyat was declared dead in the Army hospital.

But the list of those attacked does not end with Basnyat. Another army officer, Colonel Ramindra Chhetri, who used to run the army propaganda directed against Maoists on the Government owned Television; Devendra Raj Kandel, a former Minister of State for Home and a die-hard anti-Maoists were hit and wounded, while the ancestral house of Prakash Chandra Lohani, the present Finance Minister and Chief Negotiator in the failed dialogue process, was set ablaze.

The Maoists seem to have adopted urban guerrilla warfare and hit and run tactics, giving a tough time to the equally committed armed forces, who have been supplied with more sophisticated automatic weapons by the Government. Nevertheless, Kathmandu's future is uncertain and lies in the shadow of terror. According to official assessments, the Maoist decision to target the senior level Army officers is solely intended to reject all possibilities of a peace process, even in future.

Nepal's unstable politics currently revolves around three poles, and its consequent direction is hard to predict. King Gyanendra, who is away in London for a routine physical check-up, does not enjoy a harmonious relationship with the major political parties, which have been agitating ever since he dismissed the Government headed by Sher Bahadur Deuba on October 4, 2002. Arguing that the King had no right to dismiss the Prime Minister, these parties want Madhav Kumar Nepal, General Secretary of the Communist Party of Nepal (United Marxist-Leninist, CPN-UML) installed as the Prime Minister as a precondition for the restoration of the relationship with the King. They have refused to recognize the legitimacy of Prime Minsiter Surya Bahadur Thapa's Government - the second since royal takeover in October - although the King made it clear two months ago that the power he appropriated in October duly lies with the new council of ministers.

Nevertheless, in a country where royalty has been revered and backed in the past, the institution continues to be recognized as a force to reckon with, both by the agitating political parties, as well as the Maoist rebels who were insisting till recently that they 'would hold talks only with the king who represents the old regime', claiming that the Maoists themselves represented the 'new or future regime'. But the distance between the three poles - the King and his Government, the political parties, and the Maoists - is ever-increasing and that is what is creating a problem for the country.

The selective targeting of senior Army officers and politicians has, however, injected fear among politicians - both in the Government and those opposing it. It was in this context that Prime Minister Thapa appealed to the political parties on Friday, August 29, to put off their ongoing agitation, which is to enter a new phase with proposed 'mammoth rallies' in the capital in support of their demand to have their nominee, Madhav Nepal, installed as the new Prime Minister. The lack of a security environment has increased the possibility of politicians or the proposed rallies being targeted by the Maoists, on the one hand, or by the security forces under provocation. That is something that political parties may have to consider seriously before rejecting the Prime Minister's appeal.

What remains far more important, however, is that a durable peace cannot be brought back unless the Maoists are either defeated decisively in a military action, or a fruitful peace process is initiated. An extended spell of Emergency Rule between November 2001 and July 2002 - in the wake of collapse of the first ever peace dialogue during the Sher Bahadur Deuba Government - was a proof that military action alone cannot defeat the guerrillas, who now have better arms and safer and strategic hiding places.

Were the Maoists actually in a hurry to be part of the Constitutional process? The rebels have not explained their position, but abruptly calling off the peace process and resuming violence does not suggest a serious intent in this direction. "They simply wanted to put the onus for the break-down of the peace process on the Government", a senior Army Officer said, adding that this would be an opportunity lost for the rebels. With the latest round of violence by the Maoists, they are, perhaps, more feared, but are gradually losing respect as a 'political force'. They have, no doubt, acquired power and a certain status through the barrel of their guns. But the Maoists will eventually need to have their legitimacy and status endorsed by the people through a peaceful electoral process. The current round of violence is only blocking the process of their legitimization.