As Team India searches for the ideal man behind the stumps, the former India wicketkeeper pitches for Haryana statemate Ratra's talent, saying 'There is no reason why we can't accept this.' 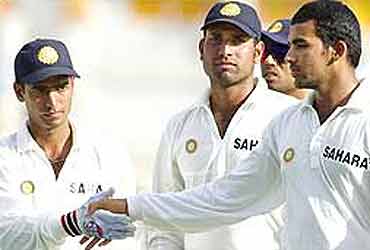 India probably holds the dubious record of having fielded as many as 10 wicketkeepers in international cricket in a span of just six years. The list of those who donned the stumper’s gloves for the country between 1999 and 2004 reads almost like a who’s who in the history of Indian wicketkeepers: Nayan Mongia, M.S.K. Prasad, Saba Karim, Sameer Dighe, Vijay Dahiya, Deep Dasgupta, Ajay Ratra, Parthiv Patel, Dinesh Kaarthick and, of course, Rahul Dravid. The irony is that the search for a reliable, world-class wicketkeeper, who can also bat competently, continues. Former India gloveman Vijay Yadav, who played a Test and 19 one-day internationals in the early 1990s, discusses the problem that is plaguing Team India like never before. Excerpts:

How do you look at the current scenario of wicketkeeping with reference to Team India?

I think we’ve had a big problem after the 2003 World Cup in South Africa. We don’t have a good wicketkeeper who can bat as well. So we’ve persisted with Dravid. And he has accepted the job reluctantly. But we still don’t have a reliable wicketkeeper for Test matches. The selectors gave enough opportunities to Patel but his performance left a lot to be desired. Now they’ve tried this new boy called Kaarthick who appears to be quite good. But my point is we should go for a wicketkeeper who can be a certainty in the team. There isn’t any point in changing wicketkeepers every now and then. It harms the team and destroys the bowlers’ confidence. If this continues, we might be in a fix by the time the next World Cup knocks at the door.

Considering Ratra’s age, talent and performance in the few matches that he played for India, don’t you feel he should have been preferred to both Patel and Kaarthick?

I just don’t know why he has been dropped. It was all very well to replace him with Patel when he was injured. But once Ratra was back, he should have been given his rightful place in the Indian team. Don’t forget he scored a Test hundred in the West Indies before he suffered an injury. It was a pity they didn’t recall him even when Patel was struggling behind the stumps. He was the best wicketkeeper available in the country at the time. Even now he has been doing a fine job. I think he can still stage a comeback in the national side. All he needs is a big hundred or two in first-class cricket to claim his stake all over again.

Being a wicketkeeper yourself, how do you assess the behind-the-stumps work of Patel and Kaarthick?

You need to have some experience of first-class cricket, whether you are a wicketkeeper, a batsman or a bowler, before you are given national duty. Patel was pitchforked into the Indian team despite the fact that he hadn’t played a single Ranji Trophy match. Kaarthick, too, doesn’t have much experience to speak of. You can see for yourself how immature they look. I don’t say they aren’t good. But they will do better with some first-class experience behind them. My point is you should prefer someone who isn’t only better and experienced but also in good form. After all, the wicketkeeper’s post is so important. That’s why I say Ratra is the best bet in the present situation.

What about M.S. Dhoni? He, too, appears stronger in batting than wicketkeeping?

Both Kaarthick and Dhoni have done exceedingly well in junior international cricket. And also for India A abroad. But again, it isn’t their wicketkeeping but their batting that has brought them in  reckoning of late. On the strength of his current good run, Dhoni also deserves a place in the Indian side.

There is a school of thought which believes that had Mongia not been dropped, we wouldn’t have to face this problem of finding an international class wicketkeeper.

It’s difficult to agree with what you say. By the same token, we could have continued playing Syed Kirmani, too, because he was getting better and better with age. He was the best wicketkeeper in the country. The idea is that you should make the most of whatever is available Call it a limitation or whatever, this is what we have at the moment.

Why do you think Mongia is being ignored?

I don’t know. There must be reasons why Mongia has been dropped. The selectors are in the best position to comment on this.

Who, in your view, is the best wicketkeeper in India at present?

I believe Ratra is still the best, all things considered, and there is no reason why we can’t accept this.

Do you support the trend of having different wicketkeepers for Tests and ODIs?

It depends. But I’ve a feeling that anyone who is a good wicketkeeper is an equally good batsman also. What is important – and this concerns the selectors – is that he should get enough opportunities to prove his ability in front and behind the wicket. You’ve to judge a wicketkeeper carefully. If a guy scores a big century or takes five catches, you shouldn’t jump to a conclusion that he is a better batsman or a better wicketkeeper. Or both in some cases. Maybe, it was his lucky day and everything he did on the field clicked. He may not be that good in reality.

Do you regret not getting half as many chances despite being hugely talented with the gloves and bat?

Obviously. I was always confident about my ability and I’m sure I would have proved my class if I had got more opportunities. But I don’t blame anyone but the abhorrent system of regionalism that has spread like cancer in Indian cricket. I firmly believe the selection committee shouldn’t be regional-based. Let’s have only, say, three members, preferably former Test players, in the selection committee. But they should be unbiased and also have the accountability.

You’ve kept to Anil Kumble on slower as well as faster pitches. Is he a difficult leg-spinner to keep to?

Nowadays, if you see our wickets, it isn’t hard to keep to someone like Kumble. In our time, we used to prepare viciously turning tracks keeping in mind the strength of our spinners only. They were both bouncy and turning. Yet, I never put on a helmet while standing behind the stumps. Of course, to keep to Kumble on bad wickets has always been difficult.

Who, in your opinion, is the world’s finest wicketkeeper at the moment?

Adam Gilchrist. He is simply brilliant, both as a wicketkeeper and as a batsman. I used to like Ian Healy, too. But I think Gilchrist has now left all of them, including Healy, far behind.