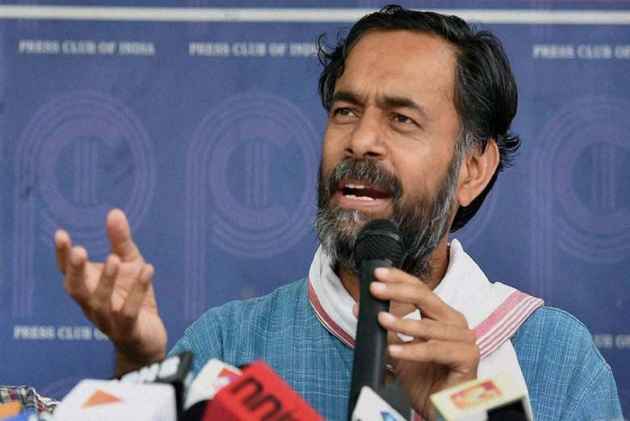 The Income Tax Department (ITD) today said it has seized about Rs 27 lakh cash and a number of documents and payment receipts after it raided multiple premises of a hospital group in Haryana's Rewari, related to family of Swaraj India chief Yogendra Yadav.

A senior ITD official said that the department also recovered transaction receipts of about Rs 15 crore, suspected to be unaccounted, after the raids on the offices of the hospital group. The raids have ended now.

Department officials in Chandigarh also claimed to have found alleged documents related to the purchase of a land plot by the owners of the hospital group in the past, using a purported cash amount of Rs 93 lakh.

This transaction is under investigation now, they said.

About Rs 29 lakh cash was found as part of the raids that were launched yesterday morning. Out of this, about Rs 27 lakh has been seized on the suspicion of being alleged unaccounted money, the senior official said.

The officials added that they have got "vital leads" on the purchase of a diamond jewellery by Yogendra Yadav's nephew Gautam Yadav, main partner in the hospital group.

They had alleged that Gautam paid Rs 3.25 lakh in cash, out of the total Rs 6.50 lakh, for purchase of the jewellery from the diamantaire Nirav Modi's firm.

When contacted by PTI, Gautam said that while purchasing the lone diamond ring from the Nirav Modi group about two years back he had "given his PAN number and it was a genuine transaction."

"I would not want to say more on this. All I would say is that the department has conducted its search and it has initiated its proceedings and now the matter is between us and the department. We will contest the charges," Gautam said.

Replying to the news agency's query on the seizure of cash from their premises, Gautam said that it was "not unusual for a large hospital like theirs to keep such an amount of cash for business."

When asked that the department recovered the said cash from their residence and not hospital, he said that their home is on "top of the hospital building."

He denied comment on other allegations and findings made by the department.

Yogendra Yadav, who had yesterday alleged that the raid was conducted with an intent to "intimidate" and "silence" him as he had launched an agitation for fair crop price for farmers and against liquor shops in Haryana, said that he was "not a spokesperson" for the hospital group and he came in the picture due to few reasons.

"My question was as to why Rewari was chosen for the raids where my yatra had ended two days back and why only two hospitals were chosen for the searches when there are about 150 such institutions in the city? This is political vendetta and this clearly sends a political message," Yogendra said.

He had alleged that the Narendra Modi-led government was "targeting" his family through the raid.

The Swaraj India chief added that he would refrain from commenting further as this case is "now between the assessee and the tax authorities."

The officials said the searches that began at 11 am yesterday at the Kalawati Hospital, Kamla Nursing Home and their owners in Rewari have ended now.

Officials had said that the action was trigerred after the taxman got inputs of alleged tax evasion by the hospital group and purchase of jewellery from a firm of Nirav Modi, absconding from probe in the USD 2 billion PNB fraud case.