As the Supreme Court decriminalised homosexuality in a landmark judgement, we raise a toast to the steady rise of the genderless fashion 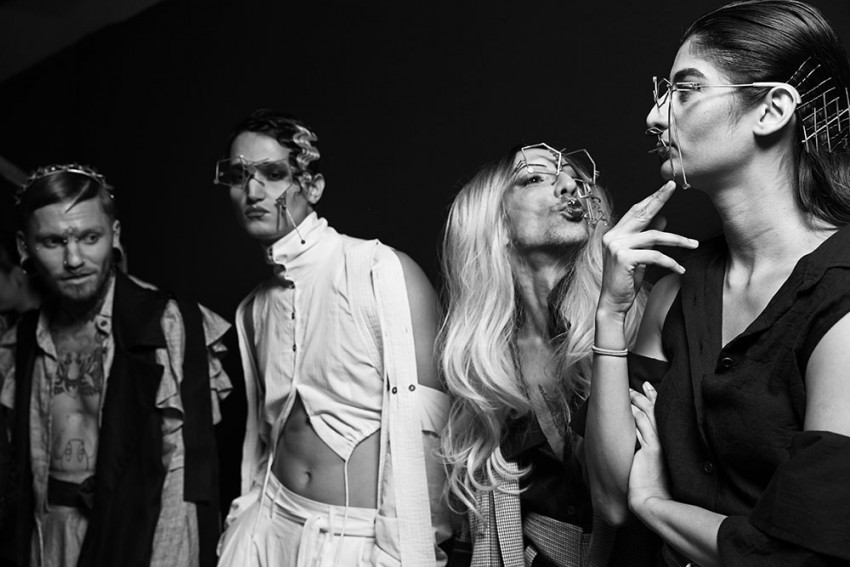 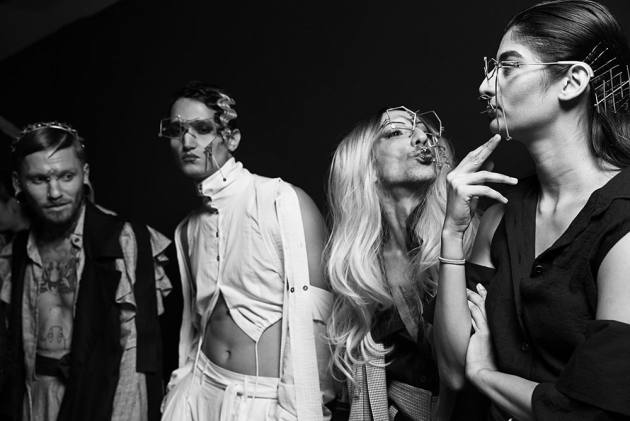 Queer style is more than just a trend. It is a social revolution, one of the strongest yet a very silent kind of protest for being the person you wish to be. As the Supreme Court has decriminalised homosexuality in a landmark judgement, we raise a toast to the steady rise of the genderless fashion.

At the recently held Lakme Fashion Week, we saw Prateik Babbar bending the rules of gender norms by walking the runway in a pair of grey, wrap around pants with mock buttons along the front and an oversized black jacket with detailing on the sleeves. He was accompanied by multi-talented make-up artist, Jason Arland sporting a sheer, heavily layered and frilled off-white gown with an enchanting veil that brought the gender-neutral theme to the forefront. 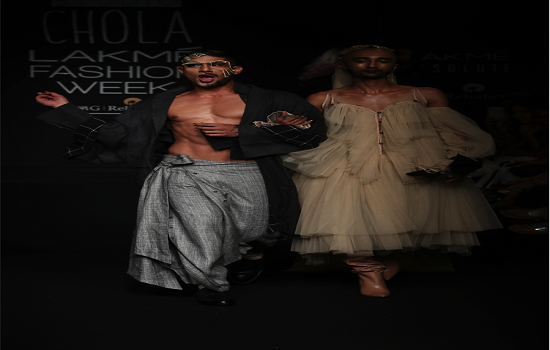 If we go back to Indian mythology, we know that it has been filled with instances which always had queer characters such as Shikandi. For India ‘Queer identity’ is not a new concept. Queer fashion is the idea of travelling back to our history, culture and our roots. We are aware of the concept of Ardhanareshwar (androgynous form of the Hindu deities) and the masculine femininity in the goddesses like Kali and the femininity in the gods like Krishna. 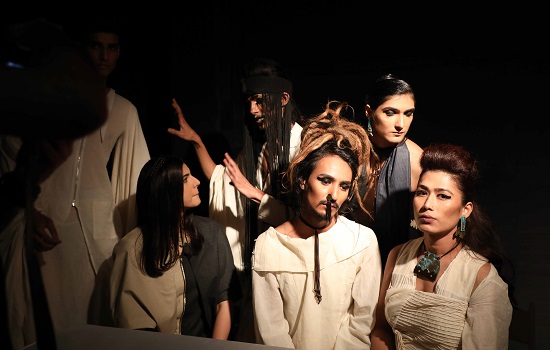 The new bunch of designers are capitalizing on fashion’s gender blur and narrowing the sexual divide in fashion and gradually eroding the rigid demarcation between feminine and masculine clothing.

At the recent LFW, the makeup was as innovative and unconventional as the gender-neutral clothes. ‘Bye Felicia’ by Sohaya Misra for her label ‘Chola’ invited the dressers to be what they wished; no matter how much off the beaten path their behaviour was. Her message was that everyone must have the strength when it’s a question of coming out fashionably. The show aimed at breaking any kind of fashion stereotypes.  And we saw men dressed up in plunging necklines, frilly outfits and bold red lip colour. Women were seen sporting moustaches and beard. This, in turn, will help in having a more liberal and equal society.

Queer fashion is about gender nonconformity and it doesn’t limit you to a specific style rule. In fact, queer fashion doesn’t have any rule. It is a lenient and less oppressive way of expressing oneself. It is about people expressing them in their own unique way and having fun with what they wear. Just because something goes against what some sections of society expect, it does not make it an abnormality. 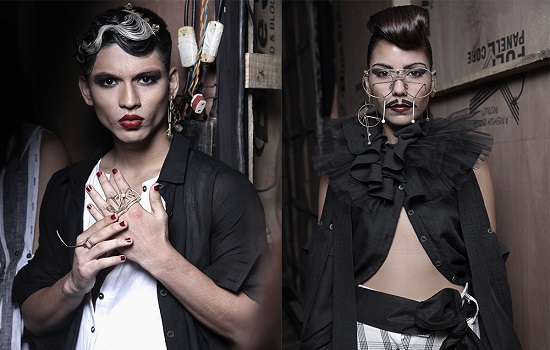 Misra says: “My brand is gender neutral. I don’t design gender-specific pieces. It epitomizes the basic principle that style is an individualistic and artistic reflection of who we are from within and by fearlessly breaking stereotypes.”

We just need to realise that everyone has the right to be who they are. “Through various forms of expression, I just wanted to bring out the concept of live and let live and love. Fashion is a movement and the trend we are looking at is one of acceptance, tolerance and being non-judgemental,” adds Misra. 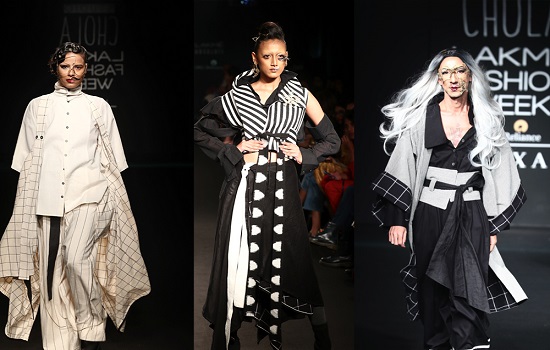 Truly like every year, this year too fashion has been used as a statement that needs to be heard and gender-neutrality was one such strong statement that was evident at the LFW. The predominant drag theme which was showcased by the ‘Chola’ brand when Sushant Divgikar sang in both male and female voice was the best part of the event and it made people think are we actually ready for queer fashion in India?

Many years back Rohit Bal also brought the concept of gender equality to the forefront at the ramp by wearing sindoor. We also saw Anjali Lama, the first transgender model walking down the ramp at the Lakme Fashion Week 2017. There is a strong trend of queerness running through Indian fashion and it is not just a trend it is a social movement too. And this queerness can be spotted not only on the ramp, but off the ramp as well.

Traditional Indian clothing be it drapes or silhouettes has never paid much heed to gender. Like the saree, lungi or the kediyu top of Rajasthan or the shirts paired with ghaghras in Haryana. Indian textile history is sprinkled with fabrics, embroideries and cuts that have nothing to do with gender and it is time that we revisit these aesthetics and own them. 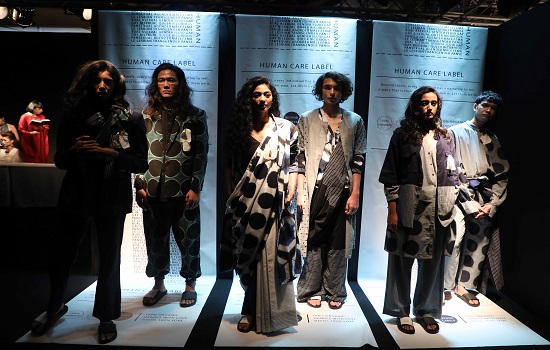 Resham Karmchandani and Sanya Suri’s collection signalled that fashion needs to move out of the constrained areas but should remain true to craft and garments that stayed away from gender specifics. This was further exemplified by the male and female models exchanging jackets during the showcase.

India is truly inching towards acceptance of queer fashion. It is bewildering that we have been following these trends without understanding what queer fashion is.  Queer fashion is not an alien or a foreign idea and it shouldn't be presented as such. Karmchandaniand Suri feels that queer fashion is the future. “We need to live in a world where people can express themselves and India essentially needs to be more liberal.”

What the designers, artists and activists are doing has been a gradual build to an India that accepts queer sensibilities. With India becoming more globally aware, getting its much-awaited recognition in all sectors, the queer community is being supported and not neglected like before. Designer Akshat Bansal of Bloni brand says, “Queer fashion is at its good growth. Fashion labels adding non- binary fashion line and all of it together is making India proud and a free country which hails gender equality.”

Bansal’s collection explores the concept of transmutation within ourselves and outside. The collection is named ‘Neutrois’ which symbolizes the wrath of all the atrocities experienced by humans of the world due to biological, cultural and aesthetic differences. Did we ever think of the aftermath, of our collective actions? This is a slow beginning to our own end and that’s what his collections at LFW brought to light - a gender identity that is neither male nor female, but neutral.

Talking about the influence of gender equality in his life Sumiran Kabir Sharma of Anam brand narrates, “Growing up with my mother in the hills, her personality of masculine femininity and managing the house like a man, doing all masculine chores, physical work, being the bread earner in the family, she never let me know the distinction the society forces upon us to be a man’s work and to be a woman’s work.” 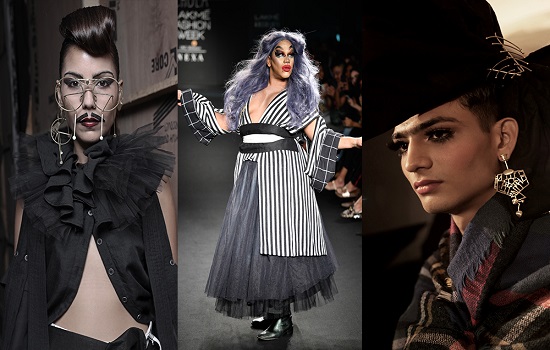 Designers, stylists and even common people have finally come to terms with the fact that the LGBT community is revolutionizing the way we look at fashion. Ace designer Wendell Rodricks feels that the LGBT community has always inspired fashion. But to define queer fashion is difficult as what people consider queer fashion is the obvious visibility of a very small percentage of this community. The larger part of LGBT wears mainstream clothing.

Another aspect to consider is that as far as India and most of the East is concerned there has always been a blurring of lines between the male and female forms of dressing. Till today sarongs, kurtas, shawls and jewelleries are worn by both genders. Men wear earrings, necklaces and all sorts of clothing items that the west would classify as feminine.

Rodricks says, “India has always been embracing of all forms of dresses. When we look at a Gujarati kedia worn by obviously macho men, it is not labelled as queer fashion.” For him the term ‘queer’ is a totally Western concept to slot people into pigeon holes of distinction. India is above this philosophy!

Meet The Petitioners Who Challenged Criminalisation Of Homosexuality