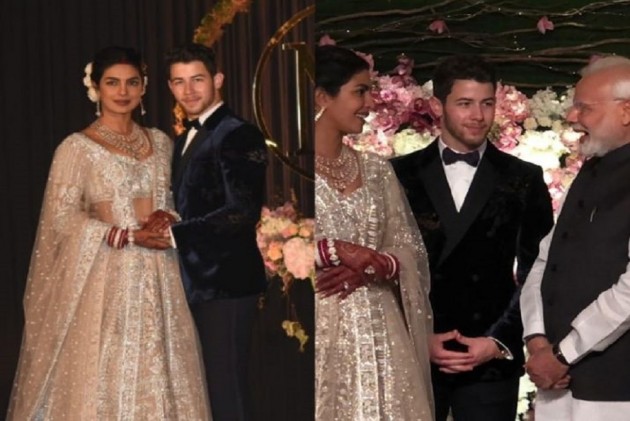 Modi arrived at Priyanka Chopra's wedding amid tight security to be part of the special day of the actress, who first made India proud by winning the Miss World crown in 2000, and then became a leading Bollywood actress, followed by a rare successful crossover into Hollywood.

After tying the knot in two elaborate ceremonies at Jodhpur's Umaid Bhawan Palace, Bollywood actress Priyanka Chopra and American singer Nick Jonas are hosting their first wedding reception in Delhi tonight. PM Narendra Modi is among the high-profile guests at the couple's reception taking place at the Taj Palace. Priyanka and Nick married twice with an amalgamation of Indo-Western cultures. They had a Christian wedding on Saturday officiated by Nick's father Kevin Jonas Sr., and a traditional Hindu marriage the following day.

Prime Minister Narendra Modi led a crowd in congratulating newly-married couple actress Priyanka Chopra and American singer Nick Jonas at their reception here on Tuesday. The PM, who was escorted on stage by Priyanka's mother Madhu Chopra, gifted the newly weds a rose each and shared some moments of laughter. He was dressed in a white kurta-pyjama with a black Nehru jacket. He remained on stage for about 10 minutes, meeting Nick and Priyanka's families with folded hands and exchanging pleasantries. 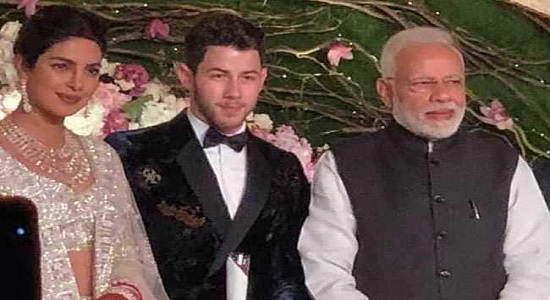 Priyanka introduced her brother-in-law Joe Jonas and his to-be-wife, "Game Of Thrones" actress Sophie Turner -- dressed in a beige lehenga -- to Modi, saying: "Inki bhi shaadi hone waali hai (They are also going to get married)." The couple of the night posed with panache, but also engaged in banter throughout the party even as guests queued up to meet them one after another.

Bollywood's "desi girl" was all smiles. "On a scale of 1 to 10 in happiness, I'm 12," she told , while Nick said: "I'm a fan of Indian weddings."Priyanka dazzled in an elegant shimmering Falguni and Shane Peacock ensemble with a multi-layered diamond necklace and earrings, with her hair neatly tied in a bun complete with white roses. She flaunted the "choora" -- traditional red bangles worn by a Punjabi bride -- and sported vermillion. Nick was dressed in a velvet dinner jacket and completed the look with a bow tie. 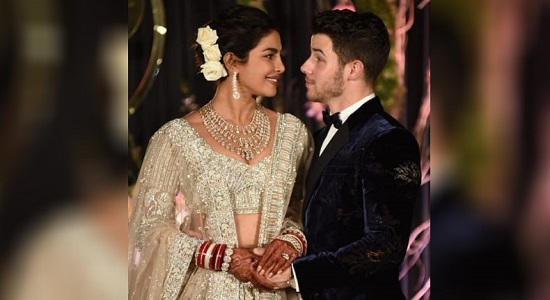 The venue, the Durbar Hall at the Taj Palace Hotel, was done up elegantly with exotic white and soft pink flowers. The "NP" icon, which has remained a staple throughout the couple's wedding, stood out on the elaborate stage. Candles flickered away at different spots of the venue which was enlivened by the sound of live music and a free flow of cocktails and a wide variety of food.

"I remember Priyanka had come to me first before she was going for the Miss World pageant, and I had told her to wear a lot of ethnic wear. She wore some of my designs. I am very happy for her. She has come a long way," said Kumar.

The gala evening was preceded by a three-day extravaganza in Jodhpur's majestic Umaid Bhawan Palace, where Priyanka, 36, and Nick, 26, exchanged wedding vows as per Christian and Hindu rituals in two separate ceremonies.

Their pre-wedding rituals at the celebrations, which saw participation from just a little over 200 guests, included a "mehendi" ceremony. There was also a friendly cricket match between the two families, as well as a glitzy and power-packed musical evening.

Of her wedding, Priyanka, a National Award-winning actress who has made her name in Hollywood as the lead star in American show "Quantico", told people.com of her wedding: "I love that our wedding was a religious mash-up.

"We took beautiful traditions that we both grew up with and personalised them in a way that made sense for us. It's been incredible to find the commonalities between our beliefs and figuring out how to blend them in a respectful and meaningful way."