Our ability to recognise, know, and utilise naturally-growing weedy, mostly herbaceous plants might be critical to help us adapt to climate change, eat healthy, and local. What’s better than spreading the word through the relaxing format of a colouring book, that allows each user to learn at their pace? 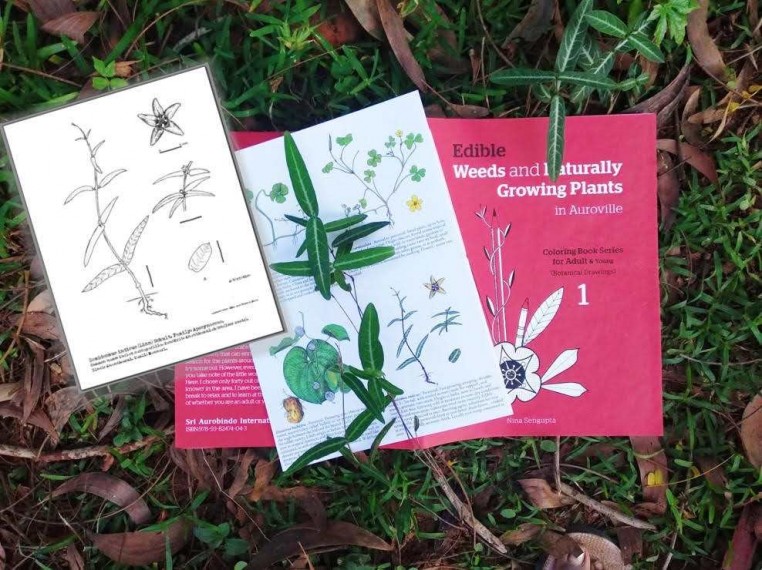 Years ago, I first experienced an exercise while attending a workshop. Later on, I have used it in my seminars and presentations. It is simple: take a minute, close your eyes and imagine a place where you would rather be. Imagine that you have no restrictions—of time, finance, responsibilities or physical abilities. Visualise it. If your response involves observing, appreciating, experiencing nature or the outdoors, then you are one of more than 90 per cent of people who feel the same, irrespective of their diverse backgrounds.

What does it say about us and our relation with nature? Do we naturally seek our wellbeing in nature? Forest-bathing treatment suggests that. In the 1980s, Shinrin-yoku Forest Therapy, also known as “forest bathing,” was developed as a cornerstone of preventative healthcare in Japan—where simply being in the forest was the only treatment. Connection with nature in any form can act like soul-food, nourishing and nurturing.

But, then, what is happening to our nature base? A report by the World Wildlife Fund in 2018, involving scientists from around the world, concluded that we have managed to eliminate 60 per cent of our vertebrate wild-lives in just the last 50 years—much of it is lost to accommodate food production for humans.

India is experiencing a similar trend with forest and natural habitat fragmentation, conversion, use of protected areas for other purposes, which has led to constant conflicts that we read in the news every day. For example, just recently read that according to the Wildlife Protection Society of India, in 2018 at least 500 leopards were either killed or died for some other reasons. In 2019 until April alone, 218 leopards have been lost. Compounded with this, is the fact that we are living in the era of climate change – characterized by erratic and extreme calamities. The recent flood in Assam has submerged a major National Park, killing more than 200 animals including 17 of the highly endangered one-horned rhinoceros.

Climate change makes natural systems vulnerable. Adapting to what is here and now, is one of the key strategies to combat climate change—while trying to slow and restrict the process of changing. One earth-friendly strategy for this is to eat responsibly, locally and healthy. For this, people have turned to foraging.

Foraging involves collection and consumption of food–such as fruits, roots, leafy greens, honey and other products from uncultivated sources. By its true definition, a forager is a direct consumer, collecting for her/himself - typically free of cost. More importantly for a modern-day forager it is an opportunity to get back in touch with nature, to be able to slow down, to notice, to breathe.

Here we need to remain cautious. Since wilderness areas are already under much stress, most of them cannot sustainably cater to our increasing desire for the wild food. For foraging to remain truly earth-friendly there is much sense to learn to forage, and not just source items foraged by others - and to ensure foraging does not deplete the resource in the wild. While there are no easy indicators, our inability to restrict such depletion early enough may make us loose the very wild resources that we want to connect to. To be on the safe side, it is best to forage on resources that are local and common – such as naturally growing, wild, weedy plants that are ubiquitous, rather than the rare and special finds foraged from the wilderness.

Given the geographical and climatic variation in our country we have a treasure trove of such weedy, wild, herbaceous plants to explore, that grows everywhere even in an around the urban areas or settlements. However, even for the weedy growths - the first step for being an efficient and responsible forager is to be able to recognise the plants.

This can be achieved with practice, participating in guided weed walks, researching on the plants, and making a few trips to the local market to find out the foraged greens sold typically at the fringes of the markets—across India by the elderly ladies.

Why A Colouring Book

A handy reference book for such weedy finds is rare. As I explored more the need to collate and communicate some of the finds in a manner that is accurate, and yet joyful and informative, became important.

Ecologists across the world in the recent years have laid much emphasis upon going beyond scientific publications to convey research results. Other media being explored include films, theatre, art, dance—while accurately conveying the research findings in a way that it is more accessible and approachable by the general public. And, at the same time, where people themselves if interested can use and advance the information base.

Holding that principle, my initial exploration and research on weedy herbs has been published as a hand-made, and hand-stitched colouring book. Apart from colouring being relaxing, the format offers an experiential learning process that allows each user to learn at their pace and to the extent they want.

The added advantage of the artisanal publication is that, like in quality field notebooks, it allows easy use of the book when taken to the field. The book includes 40 weedy or naturally-growing herbaceous plants that are found across India. In fact, all plants that are featured in the book are found across the tropical world, and a few are also found in the cooler temperate climates during the summer months. This first book is on edible weeds.

Ecologist Nina Sengupta’s first-of-its-kind colouring book for adults in India, "Edible Weeds and Naturally-growing plants in Auroville," is a visually-rich treasure trove of wilderness that can enrich the palate and the plate. The biodiversity conservation - development consultant is based out of Auroville, near Puducherry, India 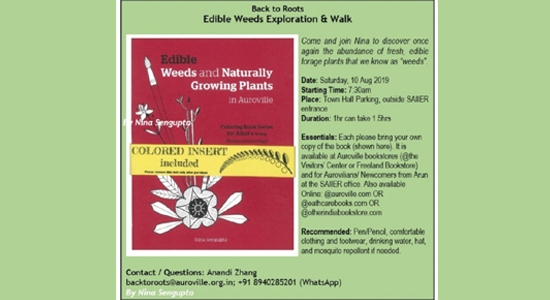