How A Child Survives Severe Acute Malnutrition By Chance

What happens to a child when her mother is pregnant repeatedly and father is too busy working on the fields? In a little village of Jharkhand, a grandmother intervenes and brings a severely malnourished child for treatment, saving her life. 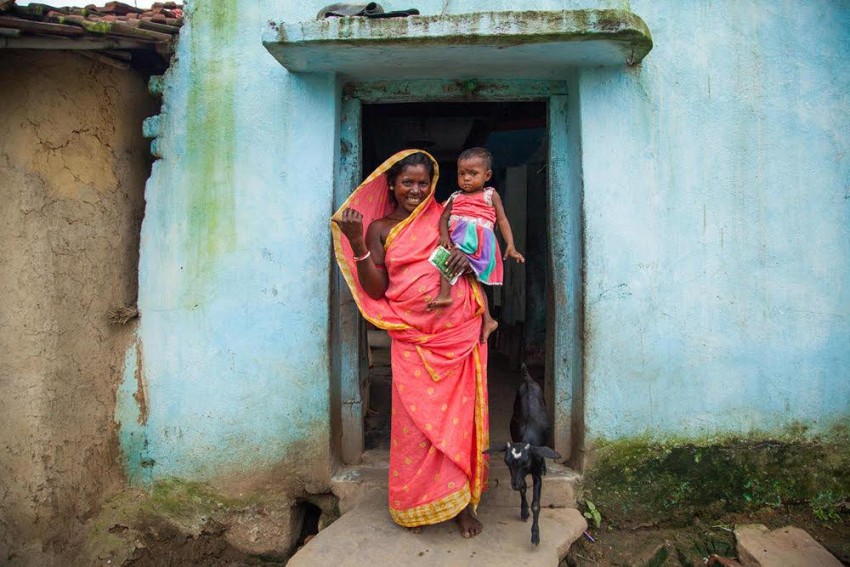 (Laxmi and her grandmother at the entrance of their house at Chanda, Jharkhand)
Jim Kasom September 10, 2019 00:00 IST How A Child Survives Severe Acute Malnutrition By Chance 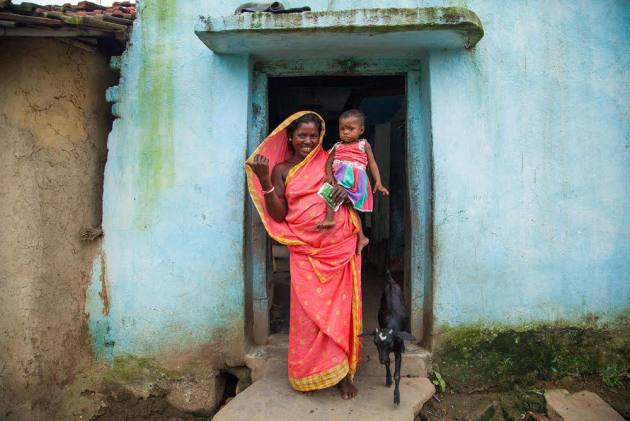 Laxmi was seated on a charpai, as a herd of goats greeted us at the entrance. In the adjacent charpai lay a two-month-old baby, wrapped in mangy clothes. House flies swarmed around and settled on her face. She was Laxmi’s baby sister, a recent addition in the family.

Laxmi, 2, is deeply attached to her grandmother, who brought her to the Out-Patient Therapeutic Programme (OTP) of Chanda block in Jharkhand. These centres are usually hosted at Anganwadi centres and open once a week, and parents bring their children to get their MUAC (Mid Upper Arm Circumference) measurements taken.

Laxmi’s mother came back from her bath at the local pond. It was the first time Sudhakar the District Co-ordinator for CMAM (Community Based Management of Acute Malnutrition) had seen her, even though he had met Laxmi at the Anganwadi centre many times. It was Laxmi’s grandmother, Bawri, who brought her to the centre every week. When Laxmi was just one-year-old, her mother was already pregnant with another baby. Laxmi’s father works in the paddy field and hardly has any time to care of her.

Sudhakar measured Laxmi’s left arm with the MUAC tape, a small tricolour--red, yellow and green—striped tape, that helps determine malnutrition. Measurements are only taken on the left arm of a child. If the measurement shows red it is a sign of Severe Acute Malnutrition (SAM). If it reads yellow, it means Moderate Acute Malnutrition (MAM). Green is a safe zone. 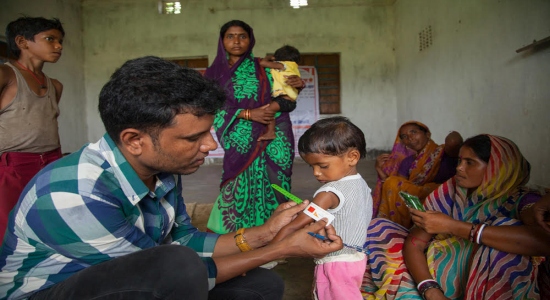 Measuring malnutrition with a MUAC tape at the OTP centre, Chanda, Jharkhand

“She was so weak. She was ill all the time with fever, pneumonia and cold,” said Laxmi’s grandmother. Her MUAC readings were well under the red margin, a sign of SAM, which can be deadly, if not treated immediately. The villagers are oblivious and ignorant to the threats of malnutrition among children. Though some deaths are not labelled as being caused by malnutrition, it accounts for a third of deaths in children, according to a World Health Organization report (Maternal, newborn, child and adolescent health, WHO, July 2014).

Sudhakar has kept record of Laxmi’s improvement over three months. When she first came in for treatment she weighed just 6.4 kg and her MUAC measurement was 11.4 cm. After nearly three months of feeding on RUTF (Ready to Use Therapeutic Food) ,packets she weighed 7.7kg and her MUAC measurement read 12.6cm. RUTF packets are distributed at the OTP, according to the dosage required. Laxmi was fed 2.5 packets of RUTF per day and 18 packets per week. A child whose weight is between 3.5 kg to 3.9 kg must be fed 1.5 packets a day, while a child weighing around 12 kg needs to be fed five packets a day.

According to a report by UNICEF, exclusive breastfeeding (that means, no additional foods or liquids, including water) for the first six months of a child’s life, and continued breastfeeding until age two or longer, has the potential to prevent more than 800,000 deaths in children under age five, and 20,000 deaths in women every year. Breastfed children are also less likely to get diarrhea and pneumonia and are 14 times more likely to survive than non-breastfed children. But like most cases in the rural areas where early marriage practices are prevalent, children are breastfed only two to three times a day up to six months. After that, they stopped it altogether.

At six months, Laxmi’s family began feeding her cow milk and at age one, she was eating roti. “What could we do when the mother does not have enough milk,” said Laxmi’s grandmother. Sudhakar pointed out that some of the most common causes of malnutrition in the community were early marriage and very little birth spacing between two children. According to the National Family Health Survey, 2015-16, infant mortality rate in India is 41 per 1,000 live births.

CMAM programme was conducted by World Vision India in collaboration with Jharkhand State Nutrition Mission in two blocks (Chas and Chandankeyari) of Bokaro District. Sudhakar worked closely with CDPOs (Child Development Project Officer), Anganwadi supervisors and workers in communities of the two blocks covering 37 OTP centres. The project was started in January 2017. Out of 16,097 children screened, 196 cases of SAM (Severe Acute Malnutrition) were identified. Of 141 children enrolled in the OTP, 46 have been cured completely. According to the August 2017 report, 51 children are still enrolled in the programme. CMAM has been endorsed globally by the WHO in 2007 and implemented in over 70 countries.

“Now Laxmi can stand alone with some support, she has grown so much stronger,” said Laxmi’s grandmother, beaming with pride, as she watched Laxmi standing with the support of the charpai. Laxmi has the right to live, but all choices for her are made by adults in the family. The choice to bring her to the OTP was made by her grandmother and she may well have saved Laxmi’s life.

Jim Kason is a writer and photographer. He works as Communications Associate with World Vision India.