The boys have simply not been able to keep possession and lose the ball too easily. An unpardonable error at this level. 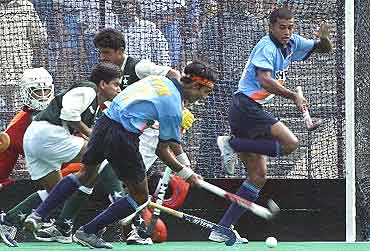 The 1-1 result meant the India-Pakistan hockey series is still alive, though the quality of hockey displayed at the Sector 42 stadium was only marginally better than the one shown in Delhi two days earlier.

But by far the most heartening thing was that the hockey fans of Chandigarh came out in huge numbers to see the match. The stadium should actually seat only about 22,000-24,000 people, but I believe there were probably close to 27,000-28,000. And many were left standing out, as the gates were closed way before the match began.

The weather was once again a dampner and we need to question once again, why the matches are being held at 1.30 in the afternoon. Surely, it is important to think about the comfort of the players, too. Add to this, the schedule is so tight that there is no time for recovery. There is just one day in between the games and that is spent in travelling.

Also, I cannot understand why Hyderabad had to be the last match. Could it not have been the first and then the series could have moved to the north with the next match in Delhi and then Chandigarh and finally Amritsar, which is a stone's throw from Pakistan. Now, imagine these teams will need to travel from Amritsar to Hyderabad for the last game and then back home.

For the players to produce good hockey, it is important to give them good conditions, too.

India may have kept the series alive, but they now need to win both the remaining games to level this Dosti Series. There were more attacks from either side, but the way these teams miss chances that come their way, European sides will overrun them, which has been the case in recent times. I cannot understand, how they can waste so many penalty corners.

The Indians may have done well to hold the Pakistanis in the absence of skipper Dilip Tirkey, as Viren Rasquinha did duty as a defender and skipper. But the big disappointment was the forward line. Sandeep Michael, Vivek Gupta and others are missing too many chances.

An unpardonable error at this level is the kind of trapping the Indian boys have been showing. It has been poor and they have simply not been able to keep possession and lose the ball too easily.

The defence did a good job. The midfield can definitely show more method in their feeding.

The Pakistanis have claimed they have been indulging in some experiments. Probably they have the Champions Trophy in mind and coach Roelant Oltmans is rightly working towards it. But frankly, even the Pakistani front line has not been aggressive or on-target as we have seen in the past. Even their seasoned forwards are missing chances. Players like Rehan Butt, Shakeel Abbasi and others are generally more accurate than what they are showing right now.

Maybe it is fatigue, timing of the matches and the energy-sapping weather.

Ignace Tirkey had the best game. He was rightly awarded the man of the match trophy and the cash that goes with it. Ignace has flowered in the last few months. I only hope this progress continues and does not fall off like it has in the case of many others.

One must also give credit to Viren, for adapting wonderfully as a defender. He is a thinking player and is really good for the team.

As for match tactics, the Indians could have done better by exploiting their left flank which was often been left open. They did try a few times in the second half but were not penetrative enough in their efforts.

With two more games left, India will need to put in a little more effort and try and win the games to level the series. Even a draw will not do any more, it has to be a win in both games. Though the Indians have not played to their potential, winning both games is not beyond them, simply because even the Pakistanis, despite their lead in the series, are not really overwhelming.