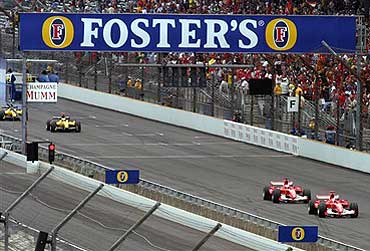 Narain Karthikeyan missed a life-time opportunity of a podium finish in the United States Grand Prix at Indianapolis, but he did not rue it saying he was happy to score his first championship points for Jordan.

Karthikeyan finished fourth among six drivers as seven teams, using Michelin tyres, pulled out of the Grand Prix at the last moment over tyre concerns yesterday. Only Ferrari, Mindardi and Jordan, all of whom use Bridgestone, contested the race.

Karthikeyan said even if the field was depleted it was important to finish the 73-lap race and he was pleased that his car was reliable this weekend.

"Due to the circumstances, our main job was not to make any mistakes and finish the race. My car was very reliable this weekend and I am very pleased with that," he said.

The Indian rookie, who earned five valuable points for his team, had his best-ever classification of the year yesterday even as his Jordan teammate Tiago Monteiro of Portugal finished third, taking the team tally to 11 world championship points.

"Both drivers in the team scored points today and this has raised immensely our team spirit. Not only we both finished the race, but we also scored points. This is so positive and I am so pleased with the whole situation. I am sorry that Mr Shnaider, the team owner, was not with us to see this result," he said.

The result gives the team a good number of data to work on when flying back to Europe as they will be testing next week in Barcelona prior to the French Grand Prix and Silverstone Grand Prix back-to-back.

Monteiro said he had a mixed feeling about yesterday's controversial race but echoed Karthikeyan's views that it was still important to touch the finish line which needed similar effort as in a normal race.

"I have mixed feelings as it was a strange race with no one being there. However, for me, it was still a race. I had to fight with my teammate and competitors at the beginning and push as hard as in a normal race. The most important thing was to finish," he said.

'I Don't Own All The Wisdom'