'Pillay Being Preserved For Athens'

'We never shunted him out. I told him just a month and half ago not to worry since he was being preserved for the Olympics,' says the IHF chief, thus ending the controversy over the star player's omission from the list of probables 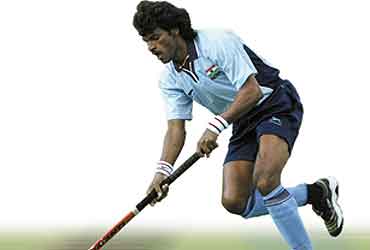 Putting to rest the raging controversy surrounding the omission of Dhanraj Pillay from the list of 30 Olympic hopefuls, Indian Hockey Federation chief K.P.S. Gill said the star striker is being "preserved" for the mega event at Athens.

"We never shunted him (Pillay) out. In fact, I told him just a month and half ago not to worry since he is being preserved for the Olympics," Gill said in an exclusive interview.

Gill, who had announced the team for the Olympics would only include players who could last the entire duration of a match, declined to comment on Pillay's fitness.

"Who is the IHF to say Pillay is fit? We will have a camp and would take the advice from SAI, Sports Ministry. They always send their experts. Medical tests are not enough.

"Medical fitness and physical fitness are two different things. I am medically very fit, but cannot say so about my physical fitness. I will not last 10 seconds on the hockey field with junior players," he said in an apparent reference to the medical report submitted by Pillay that declared him to be fully fit.

Gill said with the Games still three months away, it would be too early to say who would feature in the team.

"How can we name the team three months in advance? No one can do that?" he said adding that the Federation would pick the best-available team.

"The IHF's stance on all players is that whoever can represent the country in the Olympics, will represent. There can be no other stance," Gill said.

He also described the controversy surrounding Pillay's exclusion as "uncalled for."

"It's totally uncalled for. (But) we can't stop people from saying what they want. They can ask for any player's inclusion and we can't prevent them from asking. We have even got letters that some retired players should be included," the IHF supremo said.

"People have said that I have excluded players from the South because I come from the North. But if you see the junior team, there is not a single player from the North apart from Sandeep Singh, who is from Haryana."

Gill clarified that when he had said one or two names could be included in the list of probables, he did not mean exactly that many.

"One or two is a colloquial term. We can say a couple of more players can be included. When I said one or two more, that did not mean that the exact number was given."

When asked whether the so-called star tantrums of Pillay had resulted in differences between the player and the coach, Gill said "Not much serious note should be taken of this. These things always happen. But these are temporary things."

On when the team would be selected for the Athens Olympics, Gill said it would be picked during a camp in Germany after a four-nation tournament in Holland.

He, however, said the training in Germany could be confirmed only after the elections were over.

"Germany is waiting for a green signal. The election are tying up everyone here. We will have to speak to the Home Ministry and SAI after the polls."

Gill also defended the IHF's decision to experiment with the team despite criticism from various quarters and said the Federation was doing its best to promote the game in the country.

"How is that we are now the Asian Games champions, Asia Cup champions, Afro-Asian Games winners? We are also champions in various categories. How did this happen if we are not promoting hockey," he said.

Gill also dismissed criticism that it was he who selected the team and the selectors hardly played any role.

"We all sit together, have a meeting and then select the side. There is no problem with the selection of the team. No one ever said this team was badly selected.

"We had the problem only during the Australian tour because half of the players were playing in the juniors (Asia Cup)."

On Jugraj Singh, who has been included for the fitness camp at Barog, Gill said the step was to help the youngster get back into action at the highest level and it would be wrong to think he was being tested for the Olympics.

"But I don't think he will be fit for the Olympics. We have brought him for the camp where he can be rehabilitated for future events. The world does not end with the Olympics. If he can come back to the team, why not, he is a youngster. He has ten years to go."

On India's preparations for the Olympics, where the eight-time gold medal winners will look to win a medal after 1980, Gill said the IHF was concentrating on training.

"We are basically concentrating on this aspect. Training has to be tough because the Olympics are a different ball game altogether. We are good at the Asian level and in four-nation tournaments but are not doing well in the Olympics... We have to ensure that we are in the first four, then there is a chance (of a medal).

"In Atlanta and Sydney we should have been in the semi-finals but for some elementary mistakes by certain players. We have to ensure that such mistakes are not made again.

The IHF chief ruled out appointing a foreign coach in near future but said it would be considered if a suitable person was found.

"If we find a suitable coach we will certainly consider. But we haven't found (as yet) and I don't think we will find it in the near future. Till the World Cup there is no chance of any foreign coach being appointed."

Asked to name some of the junior players who had potential, Gill said "It is very difficult to predict who will become a good player in the future. Some of them drop out, some stop playing hockey.

"We must now find out who are the players who can perform well against the Europeans. We have proved ourselves in Asia."

'Wright Has Done A Good Job'