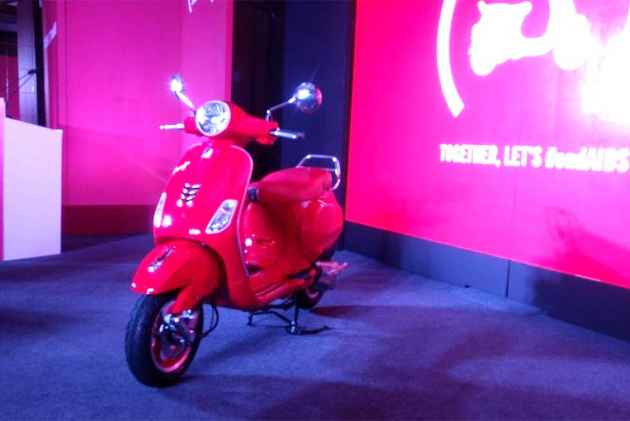 Piaggio has launched the Vespa RED, an exclusive scooter, at Rs 87,000 (ex-Maharashtra). This scooter will sit on top of the Vespa 125 food chain and is among those rare RED branded luxury products sold the world over. The scooter features a premium glossy red color scheme with chrome accents, red seat, red and chrome alloys. It is mechanically identical to the Vespa 125 and comes with a 125cc. The Vespa RED 125 makes 10.06PS at 7500rpm and 10.6Nm at 6000rpm. This is the first step and Piaggio might think about launching a 150cc variant in the future.

The Vespa RED is the result of a partnership between the Italian scooter maker and RED, a charitable organisation. RED was envisioned in 2006 by U2 lead singer Bono and activist Bobby Shriver. Since then it has worked together with a lot of global luxury brands to sustain various worldwide charities. The luxury brands have exclusive RED products on sale. 50 percent of profits from these sales go to the Global Fund, which fights crisis like AIDS, tuberculosis and malaria. Since its inception, RED along with its partners have raised funds to assist the Global Fund and help over 70 million people the world over.  RED products are selected based on their exclusivity and global appeal. An example of this is the iPhone 7 RED. Obviously, the RED branded products command a premium over similarly specced ones.

Till now, the Vespa 946 RED is the only automobile to be a recipient of the RED branding. For every Vespa 946 sold Vespa donates $150 to the Global Fund. For the India spec model, Vespa will donate $50 (approx Rs 3,200) for the cause. Vespa did sell the limited edition 946 Emporio Armani here but it has been discontinued since. So, instead of the 946 RED, we get a RED variant its 125cc scooters. Considering their noble intentions, we think it is worth spending the extra moolah and go in for a RED branded Vespa.