We hear a green-top wicket is awaiting the teams in Karachi. I am sure there would be butterflies in the bellies of the batsmen while the seamers must be smiling ear-to-ear. 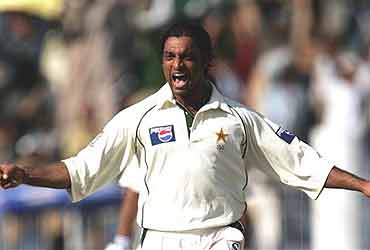 Who would have thought before the Indians had landed in Pakistan that both the teams would arrive for the third and final Test in Karachi after two high scoring drawn games. And to make the finale more intriguing and result-oriented, we hear that a green-top wicket is awaiting both the teams.

I am sure there would be butterflies flying in the bellies of the batsmen while the seamers must be smiling ear-to-ear.

Obviously, the contrasting moods of the batsmen and the seamers is quite understandable. After all, batsmen from either side made a mockery of the bowlers in the first two games and now it seems to be payback time.

Naturally, there will be more pressure on the batsmen because on lively and seaming wickets, they just can't afford to play innovative and adventurous strokes. Instead, they are required to rely more on their technique and precise shot selection as advised in cricket manuals rather than depending purely on reflex.

Furthermore, the stroke-makers, after playing on flat tracks like the ones in Lahore and Faisalabad, tend to pick up bad habits that often lead to their downfall on bowler friendly tracks like that one we are anticipating in Karachi, if not altered at the last minute.

Nevertheless, the bowlers will also need to keep a cool head on their shoulders and should not get over-excited by the look of the wicket. The more they will make the batsmen play and bowl in the corridor of uncertainty, the more they will succeed in creating problems for them. The ball would seam and swing but the real test of the bowlers would be how smart and crafty they are in controlling that movement.

Pakistan, being the home team, have the luxury of including players according to requirement and that's exactly what they have done by naming Umar Gul in the 16-man squad.

Gul is an intelligent bowler who knows his limitations and bowls in the areas where the batsmen have to play at him. He is more or less like Glenn McGrath -- not express fast but keeps teasing the batsmen outside the off-stump with controlled swing.

Mohammad Asif was also impressive in the Faisalabad Test though he managed just one wicket but I believe along with the fearsome Shoaib Akhtar, they make an impressive trio with one pressurising the batsmen with his pace and aggression, and the others trying to cash in on from that buildup.

Pakistan's real problems are not in the bowling department but in batting. There are question marks on the fitness of Inzamam-ul Haq while Shoaib Malik is absent, mourning the sad demise of his father, and Salman Butt has not played a big innings in the series so far.

Knowing Inzamam for the last 15 years, I am willing to put my money on him taking the field tomorrow because he is a great competitor and this series means a lot to him. He would hate to miss the game and regret for the rest of his life for not being there when his country needed him most.

I remember the night before the 1992 World Cup final against England, he was down with food poisoning and could barely walk when we arrived at the MCG. Imran Khan, our inspirational captain, convinced Inzamam to bat and the rest is all history.

I think Pakistan should persist with Kamran Akmal as Salman's opening partner for the simple fact that he showed better technique and temperament in Faisalabad.

Imran Farhat is available for selection but he has not played so far and it would be better if a tested and tried batsman is put on top of the order instead of a batsman who would be fighting to save his place in the team.

To fill the slot against the name of Akmal in the middle-order, Pakistan has two options -- play Farhat at one-down and push all the batsmen one position down or include an in-form Faisal Iqbal at number six.

If I was the captain, I would play Iqbal because he has shown consistency in this season having stroked eight first-class centuries and looks a much more mature and responsible batsman than he was when he last played for Pakistan.

I hear India are also contemplating to include Sourav Ganguly in place of Harbhajan Singh. If true, then it is a wise cricketing move but a little injustice to Sourav who is involved in a musical chair with Yuvraj Singh for a place in the middle-order.

Sourav is badly short of match-practice and his confidence level would also be low after what has happened to him in the last five Tests. While he would be determined and motivated to prove his critics wrong, I am sure he would also be aware of the fact that if he gets a chance, then this Karachi Test would be a make-or-break for him.

The Indian batsmen should not worry too much about the reverse swing because if the square and the outfield is lush green, there is little chance that the ball would get rough before 50 or 60 overs unless Virender Sehwag keeps smashing it on the fences.

Karachi has earned the reputation of helping the ball swing in the last session of play because of the coastal winds. And the experts substantiate that theory by citing the example of that famous Imran Khan spell in 1982 against India when he swung the ball viciously.

But since that breathtaking spell, we have not experienced anything like that again because of the construction of high rise buildings in the outskirts of the stadium and the huge enclosures inside the complex.

The toss will once again be crucial but I believe both the captains would love to lose it so that they do not have to make a decision. But the interesting part is that Pakistan's recent victories in major Tests have been when they have batted first except when Pakistan won by nine wickets after Rahul Dravid made that dreadful mistake in Lahore two years ago when he elected to bat first on a seaming wicket. I am sure the ghost of that decision still haunts Rahul.

So, it seems the stage is set for a result-oriented Test but lets hope that it is not a one-sided game. Let the team that plays better cricket over the next five days win.