Pathan, The All Rounder

Promoted to open the innings, the 21-year-old's 93 enhances his credentials as an all-rounder and hands India a handy overall 297-run lead. 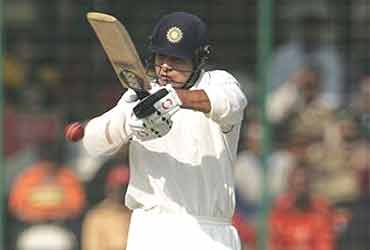 Irfan Pathan enhanced his credentials as an all-rounder with an attacking 93 to give India control of the second Test against Sri Lanka who ended up conceding a handy first innings lead to the hosts today.

Pathan, promoted as opener in the second innings, once more unleashed his batting prowess and together with a masterly half century from skipper Rahul Dravid, helped India reach 237 for five at close on the third day.

After Dravid was run out -- but not before crossing the 8,000-run mark with 53 -- Yuvraj Singh made a cameo 28 not out with shots all around the park to stretch India's overall lead to 297.

With two full days play left and the Feroze Shah Kotla track not entirely difficult to bat on, Sri Lanka might fancy their chances but the sheer pressure of batting last on the fourth and fifth days will prove a challenge.

Besides, on all three days, the bowlers have held the upper hand in the morning sessions when winter dew aids swing.

Also, the highest target successfully chased at the Kotla remains 276 for five by the West Indies in 1987-88.

Earlier, Anil Kumble claimed six for 72, his 30th career five-wicket haul, and Pathan chipped in with three for 34 as Sri Lanka, resuming at 198 for 6, lost their last four wickets for 32 runs to concede India a lead of 60 runs.

Chaminda Vaas claiming his 300th victim was the only note of celebration for the visitors who now face the prospect of facing Kumble and Harbhajan Singh on a deteriorating wicket in the fourth innings. Vaas became the second Sri Lankan after Muthiah Muralitharan to reach the milestone after trapping Gautam Gambhir (3) leg before for the second time in the match.

Pathan, who took apart the Lankan bowling when he came in at number three in the first one-dayer at Nagpur earlier in the series, tormented the visitors once again.

Visiting captain Marvan Atapattu tried to out-think the Indians by handing the new ball to Muralitharan but Pathan responded by hoisting the magical spinner over long-off in his very first over and then lofted him for another six over mid-wicket just before lunch.

India lost V V S Laxman (11) and Sachin Tendulkar (16) in the post-lunch session but Pathan more than made up for their cheap dismissals.

Laxman looked to continue from where he left in the first innings as he timed a beautiful cover drive off Vaas. But he fell to the very next ball, nicking an away delivery to the wicketkeeper.

But there was no stopping Pathan who pulled a Dilhara Fernando no-ball to the square-leg fence and then flicked Vaas off his legs to backward square-leg.

Pathan also shared a lively 44-run stand from 51 balls for the fourth wicket with Tendulkar before the latter failed to read Malinga Bandara's googly and fell leg before.

Pathan reached his half-century with a two off Muralitharan and then drove Bandara through backward point for four to bring up India's hundred in the 28th over. The 21-year-old from Baroda seemed on course for his maiden first-class hundred as he hit two boundaries, a cut through point and a drive through cover, off Murali.

But Fernando produced an accurate outswinger that drew Pathan for an outside nick to the keeper. Pathan's 93 came from 147 balls in 207 minutes and contained 10 fours and two sixes.

Dravid showed signs of recovery from illness, that threatened to keep him out of the match at one stage, with a few elegant strokes.

He reached his half century, which also brought up the 8,000 mark, with a neat cover drive off Fernando.

But as often in the past, with Ganguly at the other end, Dravid called for an unnecessary single and ran himself out, Mahela Jayawardene throwing down at the stumps from mid-off.

So furious was Dravid with himself that he flung the bat and did not wait for the third umpire's decision.

The skipper's dismissal saw the Lankans gain a spring in their footsteps.

Yuvraj, however, took the momentum away from them with his daredevil stroke making. A Vaas delivery took off and caught his gloves but it bounced too high for Jayawardene who could get only his fingers to it at first slip. A straight drive off Fernando gave him his first boundary and the Punjab left-hander went on to play some exquisite shots off Muralitharan, who, after his 7-100 in the first innings, was yet to pick a wicket in the second essay.

In the morning, Kumble struck in the third over of the morning when Vaas hit his googly straight to Harbhajan at mid-wicket.

Bandara was beaten by Pathan's swing and was bowled through the bat-pad gap and Muralitharan, after pulling Pathan over fine-leg for a six, was bowled by a Kumble faster one.