Pressured by the US and bloodied by terrorists, Pakistan must choose its destiny. Facing a stark choice, will it throw its weight decisively against terrorism? 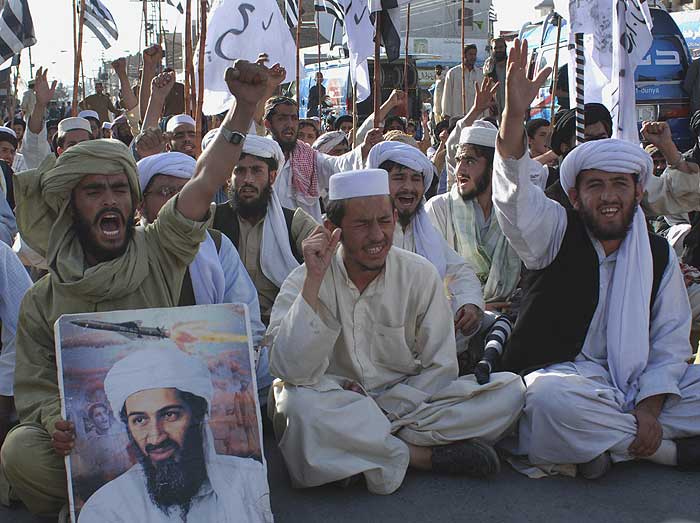 Two weeks after US Navy SEALs killed Osama bin Laden in a safe house in the Pakistani garrison town of Abbottabad, the South Asian country is at a crossroads. With the massacre of scores of security forces in an apparent retaliatory attack by militants, and US demands for tougher action against al Qaeda and the Taliban, room for Pakistan to play both sides of the war on terror is rapidly shrinking. The big questions raised by this watershed moment may force Islamabad into making existential choices.

Will Pakistan’s army and its Inter-Services Intelligence agency abandon support for militant Islamists nurtured over more than three decades? Will the country’s feckless politicians seize this opportunity to bring accountability to the generals who have ruled Pakistan directly for more than half of the country’s 64 years of independence, and indirectly for much of the rest? And will Pakistan’s elites turn their attention toward what ought to be their most pressing concern – improving the lives of an impoverished and rapidly growing population?

Or to put it another way, will nuclear-armed Pakistan after bin Laden become more tolerant, democratic and development oriented? Or will it continue down a path that most outside observers – and many Pakistanis – see as endangering Pakistan itself, the broader region and the world?

On the one hand, the Abbottabad raid has unleashed an unprecedented outcry in Pakistan, much of it critical of the military. Writing in Dawn, the country’s leading newspaper, columnist Cyril Almeida sharply summed up Pakistan’s dilemma: between being seen as a “rogue state” for deliberately sheltering bin Laden or as a “failed state” for not tracking him down in a conspicuously large compound a stone’s throw from the country’s premier military academy.

In a similar vein, prominent television anchor Kamran Khan declared that Pakistan has become “the world's biggest haven of terrorism.” The usually pro-military Khan also turned on the army, demanding a genuine explanation rather than the usual “lollipop” conspiracy theories about the US, India and Israel. A raft of articles by prominent intellectuals have honed in on the same point: It’s time for Pakistan to make a decisive break with the past.

Pakistan’s official response has been much less introspective. Army Chief General Ashfaq Kayani issued a statement, warning the US against attempting an encore with another target: “Any similar action violating the sovereignty of Pakistan will warrant a review on the level of military/intelligence cooperation with the United States.” Kayani also said that US military personnel in Pakistan will be reduced to the “minimum essential” level.

In parliament, Prime Minister Yusuf Raza Gilani spoke approvingly of bin Laden’s killing as “justice done.” But at the same time, most likely in a nod to his country’s fiercely anti-American sentiment, Gilani laid the blame for the rise of Islamic militancy in Pakistan at Washington’s doorstep. “Pakistan is not the birthplace of Al Qaeda. We did not invite Osama bin Laden to Pakistan or even to Afghanistan.” On May 14, the parliament unanimously condemned the Abbottabad raid and threatened to cut off NATO supply lines to Pakistan unless the US stopped drone strikes on militants.

Though Gilani is hardly the only person to blame the US-backed jihad against the Soviet Union in the 1980s for Pakistan’s problems with radical Islam, the truth is more complicated. From its inception in 1947 as the world’s first nation created purely on the basis of Islam, Pakistan has struggled to balance two competing notions of its identity: the relatively secular idea of the country as simply a homeland for India’s Muslims and the pan-Islamic one of a land born to further the cause of the faith.

By most accounts, however, Pakistan’s slide toward intolerance began during the prime ministership of Zulfiqar Ali Bhutto, the debonair, Scotch-swilling feudal landowner from Sindh first elected in 1970. Believing that he could co-opt the then relatively marginal Islamists, Bhutto banned alcohol and gambling and shuttered nightclubs. He replaced the traditional Sunday holiday with Friday and declared the tiny Ahmadiyya sect to be non-Muslim.

Bhutto promoted the rigidly pious Zia ul-Haq to head the army, and once Zia seized power in a coup in 1977, the Islamization of Pakistan began in earnest. The general established Shariah courts; instituted government collection of zakat, or an alms tax; stripped libraries of books deemed un-Islamic; and mandated compulsory prayer for civil servants. The Quranic Concept of War – which argues that “terror struck in the hearts of the enemies is not only a means, it is the end in itself” – was mandatory reading for army officers. Many subsequently rotated through the ISI, whose links to violent Islamism, while focused on Afghanistan and India, stretch from Chechnya to the southern Philippines.

Apart from bin Laden and his deputy Ayman al-Zawahiri, prominent non-Pakistanis who used the country as a base include Mohamed Atta; shoe-bomber Richard Reid; and John Walker Lindh, the so-called American Taliban. Over the past decade, Pakistani fingerprints have shown up on terrorist plots all over Europe, not to mention India, which has borne the brunt of its neighbor's use of terrorism as an instrument of policy.

The harsh glare of scrutiny that accompanies bin Laden’s death offers the international community its best opportunity since 9/11 to nudge Pakistan in a different direction. For a country that has long flirted with radical Islam as an ideology and is burdened with an oversized military – consuming more than twice as much of the national budget as health and education combined – all policy choices are tough.

To win back the trust of the world the army must prove that it’s abandoned a quest to treat Afghanistan as a puppet and turn against jihadist proxies in the Haqqani network, responsible for the deaths of hundreds of NATO troops in eastern Afghanistan. As a good-faith gesture, Pakistan should also arrest bin Laden’s longtime deputy and al Qaeda's likely new leader, Ayman al-Zawahiri, and the Taliban's Mullah Omar, both suspected to live under official or semi-official protection.

Lashkar-e-Taiba founder Hafiz Mohammed Saeed, who led special public prayers mourning bin Laden on the streets of Lahore, should be tried and convicted for his role in the 2008 Mumbai massacre. Finally, the army needs to stop resisting a key administrative measure it defeated three years ago – bringing the ISI under civilian control.

Should Pakistan's generals proceed with these reforms, the US and its allies ought to keep up aid flows with an emphasis on strengthening moderate voices in Pakistani society and nurturing a generation of younger army officers who respect democracy and reject terrorism.

If carrots don’t work, it’s not as though the West lacks sticks. If Pakistan’s army fails to cooperate, it should be warned that its claim to safeguard the country will be further undermined by stepped-up drone attacks and high-profile raids on high-value targets from al Qaeda and the Taliban. Facing this stark choice, Pakistan’s most stubborn institution may give up its so-called “double game” and throw its weight decisively against terrorism.

Sadanand Dhume is a resident fellow at the American Enterprise Institute in Washington. Follow him on Twitter @dhume01 Rights:Copyright © 2011 Yale Center for the Study of Globalization. YaleGlobal Online