'Our Problem Cannot Be Resolved Under The Indian Constitution' 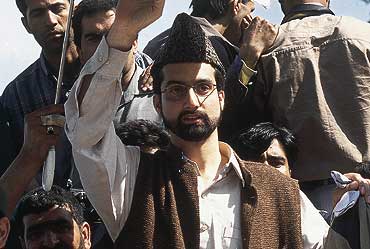 Do you condemn terrorism in all its forms?

You condemn the actions of Hizbul Mujahideen against the Indian Army?

That’s a freedom struggle, you have to make a distinction.

No, that’s not when you fight for your rights, Kashmir is a dispute, and the government of India, the Indian troops have occupied the land. So we are fighting on a military level, a political level, a diplomatic level.

But you can’t do all three actually.

Why not? The Kashmir problem has a history, a background. It belongs to the people of Jammu and Kashmir.

To the outside world, this is using violence for political ends, this is terrorism.

No, you have to make a distinction, you cannot just say...

So you don’t renounce terrorism?

Yes, we do. When innocent people are killed we do renounce terrorism but you have to make a distinction between terrorism and a genuine freedom struggle.

The rest of the world doesn’t buy that distinction any more. After September 11, violence for political ends is out.

I agree, after September 11th maybe perspectives have changed but the realities haven’t. The reality in Kashmir is that people are suffering on the ground, people are getting killed everyday and that is because of Indian intransigence.

We are ready to work towards peace with the militants, with the Mujahideen provided the government of India comes on to the negotiating table.

India has said it will open talks provided the terrorism stops.

Well, let them say it clearly.

They have said it a number of times.

This is a state of India, Kashmir.

No, it is not. That is the dispute, that is what the whole story is about.

You either choose elections to change politics or you choose the gun. You can’t do both.

We did choose the elections. In ’87, the Hurriyat conference was not in its proper shape as we are this year. We had a coalition, the Muslim United Front. They fought the elections, but what was the outcome? The elections were rigged...

This time they weren’t and you wrote them off even before they took place.

We don’t believe elections are going to address the key problem in Kashmir. Kashmir is not an electoral problem.

But this is a democratic instrument for changing politics.

Yes, in elections in principle, we agree with elections.

These elections were generally deemed to be free and fair and over 40% of the population of Kashmir...

Twenty, let me correct you.

Forty percent, there are different figures...

That’s why we had said we are ready to take part in the elections provided we have international observers.

There were watchers here. There were international watchers.

Elections under the Indian constitution are not acceptable.

There has been no sign of flexibility from your side whatsoever.

We believe there are two ways to resolve the problem—either through the implementation of the UN resolution, or through tripartite dialogue. We are more than willing to talk to the Indian government, we have even gone to the extent of saying that we are ready to talk without any conditions provided they accept the dispute in principle.

How can they talk to you when you don’t accept the democratic way of proceeding?

The fact is that Kashmir problem is basically a political problem.

So use politics instead of the gun.

We did. We have been. The Hurriyat Conference is a political forum...

And Hizbul Mujahideen, which stands behind you?

It’s a militant outfit, I don’t deny the fact, but the fact is even they are ready. We have said that if the government of India is ready to talk to us, we will talk to the boys and convince them that they should renounce activities.

But you can’t shoot your way to the negotiating table. You could tell the Hizbul Mujahideen to lay down their arms they will listen to you.

We have. We have said if the government of India is willing to address the problem. You have to address the issue, which is the political dispensation of the state of Jammu and Kashmir.

On August 15, the government offered to talk to the elected representatives. Had you decided to take part in the elections, you could now been talking to the Prime Minister on behalf of the people of Kashmir.

Let me be very clear about as far as the government of India’s position is concerned, their position is that they are willing to talk under the Indian constitution, which is just not acceptable to us.

But again, who elects them? That’s the problem.

People are there... the people that you claim to represent.

The system is very much in the control of the Indian government.

So you will just carp from the sidelines...

No, we have said that we are ready to prove our representative character, if any neutral process is agreed upon.

Why don’t you work with the new government?

Their manifesto was not roads, hospitals, bridges, it was the end to the crisis—they want a solution in accordance with the wishes of the people. Umer Farooq, you are still reciting the same old mantras and they have done new things.

The Hurriyat was formed to project the struggle of the people of Jammu and Kashmir, in the right perspective. We are doing that and we will continue to do so.

They are letting out political prisoners, condemning Army atrocities.

It is not something new. Again, it’s what India is trying to say, you install POTA and then you take it back. You arrest political prisoners and you release them. You tried to convince the world you are giving a concession, but you are not giving any concessions to the people.

What do you do for peace? When the kids leave the mosque, and they want to pelt the Indian army with stones, you tell them to stop. Is that your sole contribution to the peace process?

No. We believe that there has to be a proper guideline to the movement.

We cannot have peace in Kashmir until and unless you resolve the basic issue. You cannot have peace by just installing a new government. We have seen it in the past it hasn’t worked, it will not work in the future.

Why don’t you go and talk to them?

We have no problem talking to anyone... We have said we are willing to talk to anyone who is ready to accept the disputed character of the state of Jammu and Kashmir.

You have to put down conditions before you will talk.

It’s not a condition, it’s a reality!

You are putting up a brick wall and the new government is the only institution that is moving forward.

Wouldn’t it help if Pakistan stopped supporting and infiltrating militants into Kashmir?

We have to make a distinction. What you call Pakistan, I call Azad Kashmir.

You call it Pakistan controlled Kashmir.

Under the directions of the Islamabad government, terrorists have been infiltrated into Kashmir. Haven’t they?

Azad Kashmir is not a part of Pakistan, it’s a part of the disputed state of Jammu and Kashmir. And if somebody comes from there and helps their brothers, I don’t think anybody can stop them.

Nobody looks at it in those terms, helping brothers. These are militants who come and shoot people.

This problem has a human dimension. People are divided, families are divided. More than half of my family is in Azad Kashmir. We want a reunification of Kashmir and then the problem to be addressed.

So this is what you call flexibility. You want re-unification with Pakistan-controlled Kashmir?

No, we are saying—let us talk.

What will you settle for?

Anything. Let us sit and talk.

I am asking what your ideas are.

People talk from a buffer state to an independent state; to the Dixon plan... They talk about a broader autonomous region of Jammu and Kashmir. We have this committee also in the US called the Kashmir Committee, they have also come up with some proposals. We are saying that we are willing to discuss all these options.

So you are telling me that you will settle for something less than reunification with Pakistan-controlled Kashmir?

Ideally, as far as my personal opinion is concerned, I believe that that dimension has to be addressed.

So you will settle for something less than full reunification with Pakistan-controlled Kashmir? Yes or no?

I mean, yes, there is a possibility—if India and Pakistan reach an agreement and we are given access to people in Azad Kashmir, the borders are opened.

Isn’t the reason you are reluctant to show flexibility is that you are walking a narrow tightrope? Your own security would be under threat if you started telling Hizbul Mujahideen to lay down their arms.

Hurriyat Conference has made it very clear that we are willing to play a role. We are even ready to go to Pakistan and go to Azad Kashmir and talk to the boys. And make them ready to renounce activities for a certain time period provided the government of India comes up with a political process. They haven’t allowed us to go...

You will go and tell Pakistan to stop infiltrating and sponsoring terrorism?

We will tell our boys that you should renounce activities for a certain time period provided the government of India also responds in a certain way.

Why don’t you do it without conditions? Why don’t you tell them to lay down their arms and see if the situation would change?