The soundscape of the Himalayan highlands has changed dramatically over the years. And it’s not all for the better 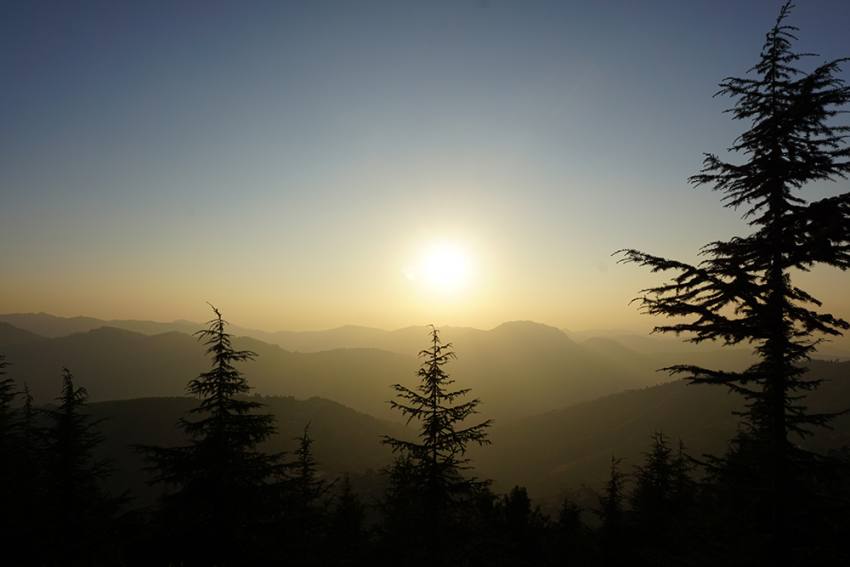 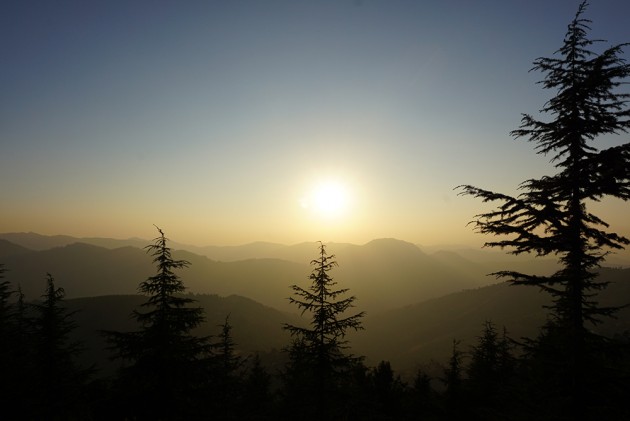 Sights, and not sounds, form our first impressions of highlands, both in imagination and in reality. The strong visual aura with which hills and mountains routinely mobilize our personal and cultural consciousness is overwhelmingly responsible for this disposition towards the eye rather than the ear. And yet, as the saying goes, the hills are full of sound of music too. It would be difficult to find anyone who hasn’t been moved by a sense of “harmony” intrinsically marking mountainous terrains. It is a harmony that is in equal measure humbling and uplifting, for it arises out of the natural grandeur of valleys and massifs and also out of the slow, unhurried pace of human civilization they ensconce.

Much of this is changing now at a rather alarming rate, as India’s uplands witness the same desecration that is the hallmark of virtually every other plain-based settlement. Still however, there continues to exist a rhythm and a sense of release in the heights and folds of those great, fabled ranges, the Himalayas. This is a rhythm that palpably exudes through the cedar and fir-crested slopes, the spectacular sunrises and sunsets, and the mighty rivers and plentiful orchards. As long as such elements retain their generous presence, the highlands shall continue to enchant with an openness and ecstasy that can be best described – and experienced – as “musical.”

Of Heroes and Deities

Hindi Cinema has celebrated this truth for long, most evocatively through the countless song-and-dance sequences shot in those mesmerizing settings. From Ram Teri Ganga Maili’s “Husn Pahaadon Ka” to Jab We Met’s “Yeh Ishq Haaye” to many other scores, films have routinely explored the “pulse” with which upland spaces throb and thrill human moods and emotions. As the inimitable social commentator Santosh Desai has observed, “for a long time it was a contractual obligation for all Hindi film songs to be shot in the hills.” Given this nearly fundamental relationship between mountains and melodies, it is hardly surprising that a raga alluding to the ambience of such terrains also endures by the name of Raga Pahaadi.

The many years of my childhood, adolescence and adult life spent in the north Indian Himalayas has made me appreciate this link at a personal level. I still remember the long school years spent in the Kullu Valley being infused with the perpetual reverberation of the mighty river Beas, that trundled down the flanks and banks of Manali. There, absolute silence was a myth, because the ceaselessly gurgling swells and surges resolutely determined the general atmosphere and also marked the final sound I would hear before falling asleep, akin to a natural lullaby. Likewise, the routinely commutation of the devtas in intimate palanquin-processions by way of the main town would carry their own distinctive sounds: the deep-throated hoots of the grand trumpets called karnals, the resounding percussive thuds of dhols and nagaadas, and the lilting trills of shehnais. But even these civilizational sounds felt a part of nature and not an artificial cultural interjection, as if emanating from the very terrain that hosted them. 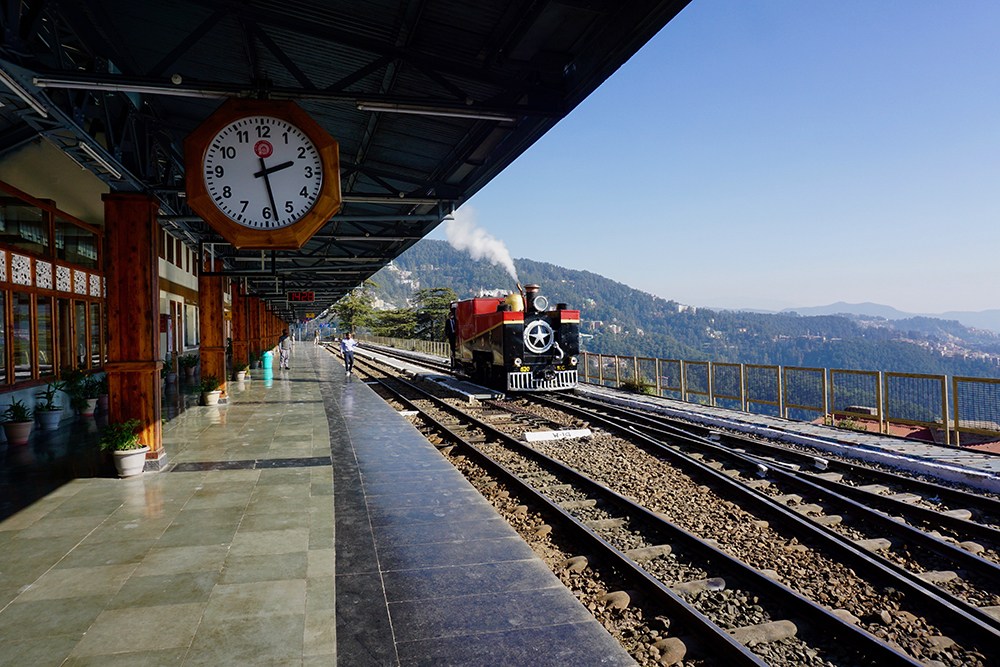 A steam engine on a trial run at Shimla railway station

After spending almost two decades in Kullu we shifted to Shimla, where the novelty of soundscape was conspicuous from the first day itself. Unlike the embedded setting of the valley, Shimla was perched high up on a curving ridgeline of several hills in keeping with the spatial notions of colonial domination. Established as a “home away from home” for the British in the middle of the nineteenth century and serving as the Raj’s summer capital from 1864 to Independence, Shimla evolved a peculiar urban geography in its imperial heyday. Its many technological and architectural advancements not only contributed to the specific “look” of the hill station but also lent it a particular “aural” dimension.

The most imposing developments in this regard were the introduction of the railways from the plains to the hills and the inauguration of the siren-installed Central Telegraph Office, both during the early decades of the twentieth century. Since Shimla’s arched massif formed a natural echo chamber, the trailing hoots of the trains entering and leaving the station and those of the everyday siren at 10AM and 5PM to bracket the working hours could be heard for miles around, echoes that continue to be heard to this day. 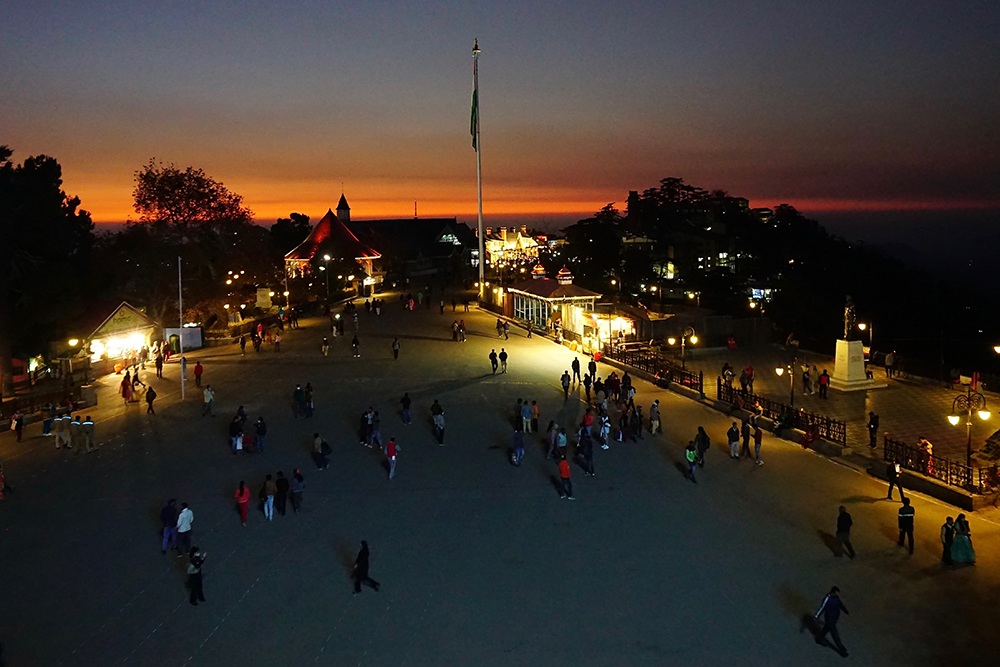 The Ridge at dusk, Shimla

Today, as these sounds engulf the town for a few minutes on a daily basis, residents revive their links with a historical landscape by the means of a now naturalized attunement of the ear. Many Shimla people are even known to adjust their wrist-watch timings to the resounding blares. In the yester years, along with these hoots, the Ridge-based Christ Church further contributed to the town’s aural culture until the bells became defunct four decades ago. Even the end of the First World War was proclaimed through these “public” sounds. As the local historian Raaja Bhasin evocatively writes about the Armistice Day, “The bells of Christ Church began to peal, the hooters of the telegraph office began to blare and the noon-day gun that normally made a solitary announcement began a twenty-one-gun salute.”

But if such hoots, peals and salutes gesticulated towards “grand” aural registers due to their massive spread, then there were also the more “intimate” sites that typically informed the town’s soundscape: the pianos and the bandstands. Old residents vividly remember how almost every British-era institution would have a thriving “piano culture”, which declined after the last Irish teachers of music left Shimla in the nineties. Likewise, the Mall’s bandstands would also function on a consistent basis until the eighties to gently entertain the walking public, adding a beat or two to their gait and grace as they soaked in the surrounding Himalayan sights. 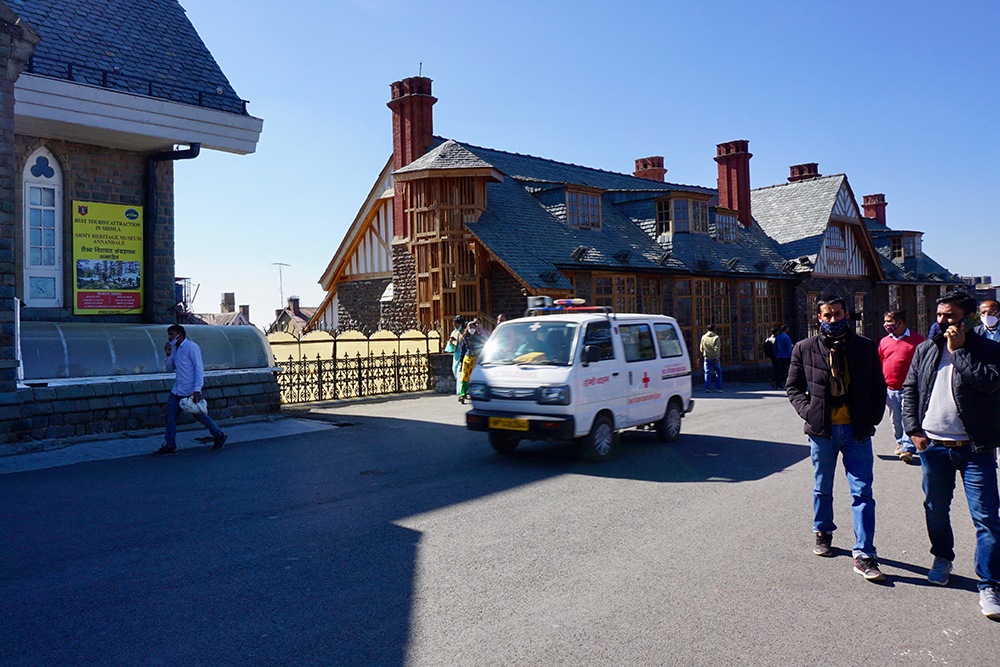 An ambuance plies on the Shimla Ridge

All this knowledge and memories of Shimla’s unique sound culture tumbled to the forefront of my consciousness in my most recent trip to town, which I made after having spent eight months of continuous lockdown in my present Ghaziabad home. It was a knowledge that felt deeply at odds with what I experienced this time, which could accurately be described in terms of a “rupture” with the erstwhile harmonious soundscape. The hoots of the siren and the trains, while still being there, were taken over by the rapid blaring of the ambulances that were routinely seen plying up and down the Mall Road. Never before had I witnessed so many medical emergency vehicles rushing with such a sense of urgency and frequency on a pathway that was otherwise strictly designated as “pedestrian.” Every time a taxi or van with shielded windows and painted red crosses would pass by, people would raise their heads with dread and anxiety.

The numerous walks I took in the fresh Himalayan air did bring the solace and spiritual lift I had so deeply missed in the pollution-infested plains of Delhi. But I couldn’t help getting troubled by the conversations overheard during my amblings, about the “number of rising infections” and the “new demises.” Perhaps the generations of Shimla people who had lived here during the months of Partition violence and the blackouts of the Indo-Pak wars had some prior understanding of what it felt like to witness a peaceful place lose its sense of harmony; for me however, it was all a new, in-your-face experience. The round-the-clock loudspeakers planted by the district administration to raise safety-awareness did their job well, but it was difficult not to feel worried because of the new, palpable shift in the town’s soundscape.

The anthropologist Tim Ingold has observed that “hearing defines the self socially in relation to others”, and quotes the linguist Saussure in support, who said that “the only true bond is the bond of sound.” As the pandemic gains fresh stronghold in Himachal’s capital and elsewhere, it is this bond that gets affected at a most visceral level. “Suna tumne…?” (did you hear?), we now hear everywhere, in anticipation of something dreadful. One can only hope that such anxieties wither away with the closing of this year, and that the hills soon return to their intrinsic unblemished rhythmicity.

(Siddharth Pandey is a writer and photographer currently based in Delhi-NCR. He belongs to Shimla and is writing two histories on the town. He can be contacted on his Instagram account @shimlasiddharthpandey. Views expressed are personal, and do not necessarily reflect that of Outlook magazine. )