The Mumbai launch of Hariprasad Chaurasia Breath of Gold at the Tao Art gallery included a flute recital by the students of the maestro. What gave the recital an added edge was that all flautists who were performing were women.

Art Galleries do not only display art these days. Sometimes they double up as performance spaces.

Tao Art Gallery in Mumbai has been doing that over the past one month, playing host to performers, first at a book launch and then at an event to celebrate its own 20th anniversary.

The Mumbai launch of Hariprasad Chaurasia Breath of Gold at the Tao Art gallery included a flute recital by the students of the maestro. What gave the recital an added edge was that all flautists who were performing were women.

Women seldom pick up the flute as their favoured instrument, perhaps because playing it distorts the features. At least the mythological story says the Minerva threw away the flute because she felt it was not becoming on her part to purse her lips and blow out her cheeks while playing it.

The elegant women performers however, managed to play two numbers, a Hamsadwani piece composed by Deepak Shah who accompanied on the piano, and a medley of Shiv-Hari creations for cinema, without any distortion of faces, thanks to the blowing technique taught by their guru. Led by the ‘Flute sisters’ Suchismita and Deopriya Chatterjee, the ensemble included Vaishnavi Joshi, Vilandi Kulkarni, as well as Mussarat Jabeen from Bangla Desh and Amrita Upreti from Nepal. Pt. Kalinath Mishra was on the tabla. It was a performance that proved the versatility of the humble flute that through the centuries had been considered a rustic instrument only capable of being an also-ran in an orchestra.

Kalpana Shah, owner of Tao, went one step further than music with her anniversary party. Four dancers, Prashant Ruperlia, Sairaj Methari,Yesha Shah and Gia Sigh Arora danced around the theme of empathy where they responded to the paintings on display. Their movements mimicked emotions that the art triggered in them and aimed at reaching out to draw in the audience to share the emotions vicariously at least.

Perhaps the most enthralling was the segment called Chinese Whispers where Gia responded to artist Seema Kohli’s sculpture of Vincent Van Gogh by empathising with a moment in his life. Taking up the cue, the other dancers one by one, empathised with the preceding dancer, and ‘experienced’ the moment when Van Gogh, imagining it to be the recipe for happiness, swallows yellow paint. Each dancer responded to the fact that the paint was travelling inside the artist’s digestive tract and colouring it, in a different way, yet remained linked to the main emotion. A powerful concept that piqued the imagination was made visually more intriguing by the body paint patterns on the dancers created by body art artist Simran Oberoi. The women were decorated in swirls and strokes, reminiscent of Van Gogh’s work, the men wore more conventional patterns.

The show marked the progress of a gallery from being a plastic space to one that held the notion of all arts as being united by the thread of creativity.

Among the many events that will mark International Women’s Day on March 8 is WAVES: Readings in the Shed. Sub-titled, ‘An initiative to explore the written word in all its performative forms’. Waves will be held at Mustard, Atria Mall, Worli, Mumbai from 6 pm onwards.

Faezeh Jalali and Reshma Shetty, the two award-winning, multi-dimensional theatre personalities combine with Kyla D’Souza, a graduate of the Lee Strasberg Theatre, Jhelum Gosalia, who holds a Masters degree from RADA and actor-musician Keith Sequeira to read in a structured form stories that illustrate the many waves of feminism that has swept over us through the ages. 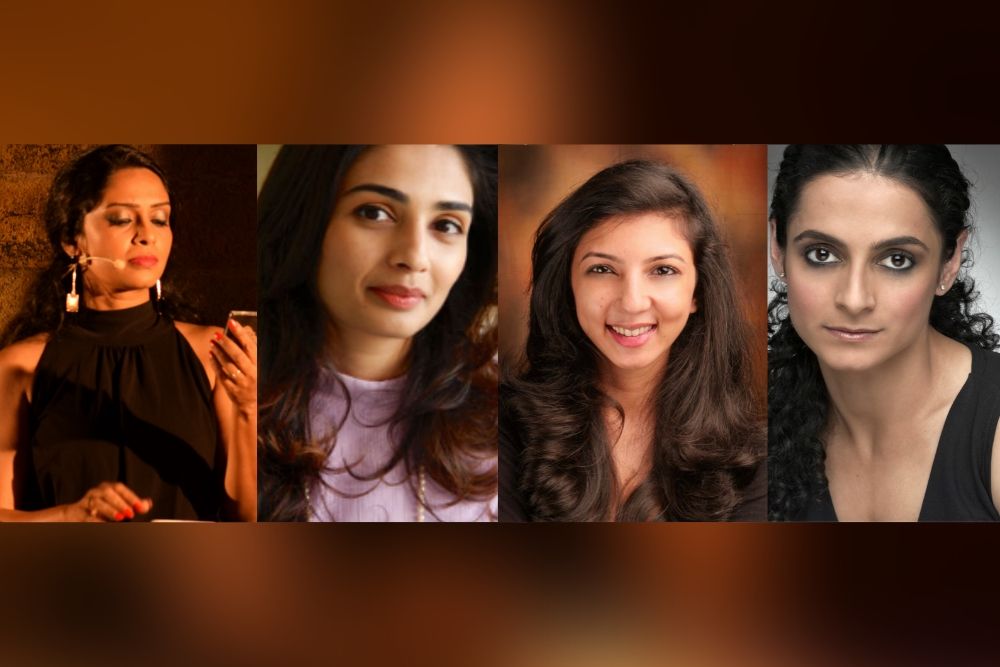 Dipping into the strong and long flowing river of feminist movements across the world, the performers tell stories based on texts by pioneering feminists like Mary Wollstonecraft, Mabel Lee, Carol Hanisch and Simone de Beauvior and move on to more contemporary issues like the empowerment of women and the #MeToo movement. Each segment of the performance will aim to bring out the atmosphere prevailing in society and the reactions to the movement, at that specific time and age.

It will be interesting to see how, through the medium of words the actors will present the ethos that prevailed at different times in history.  Theatre without too many props, and with strong voices that set out themes and stories that hit straight at the target is a sign of the times. And a dedicated band of artistes seem determined to prove that brevity is beautiful and getting straight to the point is impactful.