Sathya Saran writes about music that connects audiences to 'themselves and to silence' and about the dance form Kathak, that has become both classic and contemporary at the same time.

At the recently concluded KSLF, a boutique Literature fest named after the well-known, well-loved Khushwant Singh, each day’s session began with music.

In many other cities, chances are that the performers would have sung to half-empty spaces, but not at Kasauli. Within the first ten minutes of the music taking wing, the audience had filled ninety per cent of the seats.

Such was the magnetism of the young singer who, with no fuss or ado, set about singing a variety of devotional compositions by Guru Nanak, Bulleh Shah, Ghulam Farid and Kabir among others. “Take this time to go within yourself, and be with yourself, and when I end, stay silent for a moment to let the peace linger,” the singer said as she started the day, adding that she wished to invoke a meditative mood rather than applause. But such was the sweetness of her singing that the applause came naturally.

“I was a biochemist, with a Masters from Punjab University,” Gurleen Kaur said in a phone interview, “but we do have a practice of meditation in the family.” A chance meeting with Vikram, a professional percussionist, and a few jamming sessions later, “I decided this is what I want to do. I threw up my job and he persuaded me into joining the group, and we started Soul’s Diet.”

That was barely a year ago, but despite having no training in music, Gurleen and Soul’s Diet have been successfully performing and creating opportunities for audiences to “connect to themselves and to silence.”

Slight of built with a voice and range that belies her fragile looks, Gurleen and Soul’s Diet can move her listeners to tears or rapture. Listen to her on the the company’s Facebook site singing Ek allaf pado chutkara ee, or the sweetly rapturous Menda ishq bhi tu or even Raghupathi Raghava Raja Ram which was her closing anthem on both days, and you will know exactly what I mean.

Kathak, both classic and contemporary, took the stage as part of the National Centre for the Performing Arts’ tribute to Kathak doyenne Kumudini Lakhia in Mumbai. Teacher to generations of dancers who joined her Kadamb School of Music and Dance in Ahmedabad, choreographer to many contemporary creations that have thrilled younger audiences, Lakhia, from her post of honour in the front row watched her students create ‘Designs of Space and Time’.

Creating patterns that were lyrical or geometrical by turn, with fluid movements alternating with brisk footwork, the ‘Kadamb’ dancers shifted through spaces. The ‘Tarana’, with both male and female artistes dancing to a heady tune was particularly beautiful. Fast footwork is as vital to Kathak as fast and repeated chakras, and the dancers, especially the men, proved their mettle in both. 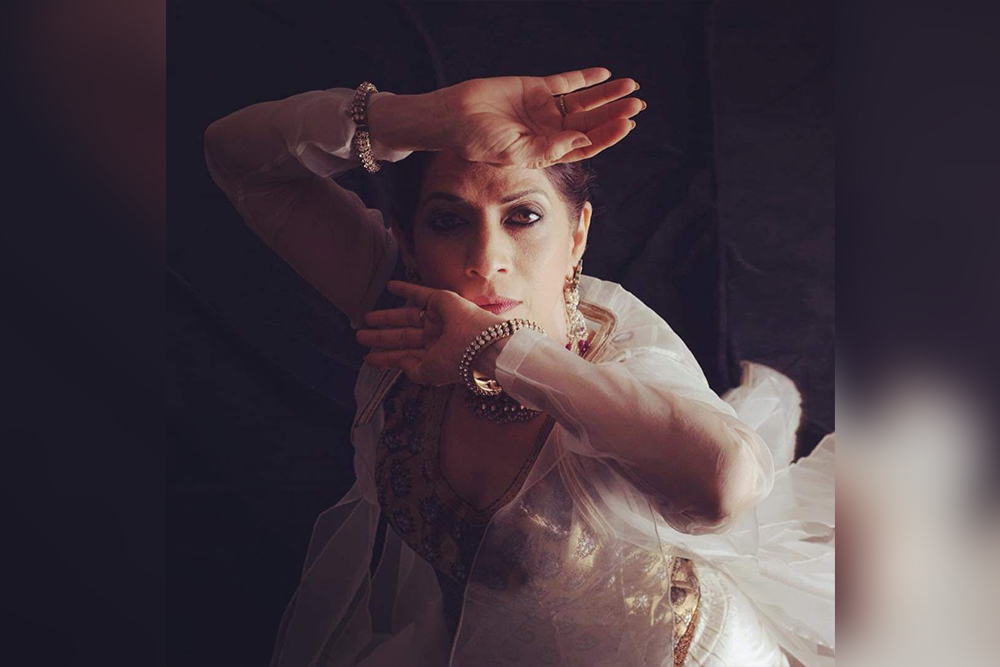 The music, unfortunately, was recorded track. Yet, the abhinaya piece in raga Brindavani Sarang,  Ban ban dhoondana jaaoon where Yashodha seeks an errant Krishna was evocative and well executed.

Following fast on the Kadamb footsteps came Lakhia’s most celebrated student, the internationally renowned Aditi Mangaldas, who proved herself worthy of the many awards and titles to her name.  Mangaldas runs the Drishtikon Dance Company which has some wonderful ballets in its repertoire, but this time, she performed alone.

Though the occasion was good enough to merit the unveiling of a new ballet or solo creation, Mangaldas chose to present a much-loved piece, by repeating extracts from a 1997 composition titled  ‘Footprints on Water’.

Her choice of rich and varying costumes, her elegant footwork and her lucid expressiveness led the audience seamlessly through three of the six seasons, Varsha, Sharad and Hemant. A product of great collaborators, with music by Shubha Mudgal who also worked on the research, lyrics from Kalidas’ Ritusamhara, and by Hitomaro, Dr. Jeevan Pani as well as Haiku poems and the interpretation on stage by Aditi, the seasons came alive.

Varsha brought in thunder, lightning and dancing peacocks. The longest piece in the three-part presentation, it was languid as well as energetic, and one could hear the rain as it fell, first in happy, soft drops to assuage one after the summer heat, and then, in stronger bursts that wet everything from the dancer’s clothes to the earth under her feet.  Mangaldas mimicked the dance of the stately peacock celebrating the rain, as the segment drew to its finale.

Snow and crystal ice, sparkling skies and lotus like clouds and a profusion of flowers ushered in the more rhythm-based Sharad segment.

Hemant was pure abhinaya, with autumn presiding over Mangaldas’ clothes, mood and lyrics in Haiku that bemoaned the abandonment by a lover who took away the seasons, and left only the falling leaves of autumn to cover the entire landscape of mind and earth.

One line that stood out in the midst of the many poetic ones recited by the dancer to accompany her hand movements was, “The leaves never know which leaf will be the first to fall...” taking the composition from the level of the physical to the metaphysical.

(The writer was editor of Femina for over a decade)