BJP Only Pretends To Respect Ambedkar, Or Else Anand Teltumbde Would Not Be In Jail 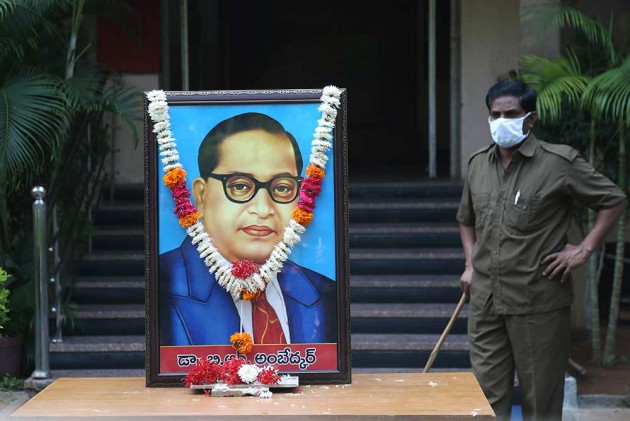 The year 2020 is proving to be a strange one for the whole world. The coronavirus born in Wuhan, China, at the end of 2019 had spread the whole world by mid-March. Many countries have imposed a lockdown of entire national economies and human activity in collective public places. But this strange virus seems to be eating human brains more than our lungs.

The virus had reached India—via Kerala—by January 30 but the Indian Government took cognisance of it only much, much later. Even a month afterwards, it seemed very much like business as usual. There were important ‘events’ to fuss over, like Donald Trump’s India visit around February 24. This was accompanied by massive communal riots in Delhi; also, a leisurely Parliament session. The BJP-friendly Muslim organisation called Tablighi Jamaat was also duly given permission (and visas) for its massive international conference in Delhi in mid-March. Many worried state governments had already started imposing their own local lockdowns by now. Then, suddenly, at 8 pm on March 24 evening, Prime Minister Narendra Modi addressed the nation, imposing a national lockdown from that midnight.

Millions of migrant labourers in all of India’s cities, living under temporary tents and without a house of their own, did not know where to live or how to live from March 25 morning onwards. Tens of thousands of them started walking back to their native villages hundreds of miles away. They found themselves unwanted on the roads; they had no food to eat, no water to drink. Children, pregnant mothers were among those walking caravans who will figure in future histories of India. We know that most of them would be Dalits, OBCs and Adivasis; along with a few poor from otherwise privileged castes. The first phase of the lockdown ended, ironically, on April 14—the 129th birth anniversary of Ambedkar. And Prime Minister Modi was addressing the nation again, at 10 am, as I was writing this article.

Modi invoked Ambedkar’s Preamble to the Constitution of India, and mentioned ‘We the People of India’, as he announced an extension of the lockdown till May 3. He praised Ambedkar’s services to the nation to the sky and said his party was also celebrating Ambedkar Jayanti across the country.

But quite shockingly, on the very same day, Anand Teltumbde was being arrested in Mumbai. The 68-year-old scholar, public intellectual and husband of Ambedkar’s grand-daughter, Rama Ambedkar, had written an open letter to the people of India just before his arrest under the draconian UAPA. He wrote:

“I have been a simple person who has been earning his bread honestly and helping people to the extent possible with my knowledge through writings. I have an unblemished record of service for nearly five decades to this country in various roles in the corporate world, as a teacher, as a civil rights activist and a public intellectual. In my voluminous writings comprising over 30 books, and numerous papers, articles, comments, columns and interviews, published internationally, not an insinuation of support to violence or any subversive movement could be found. But at the fag end of my life, I am being charged with heinous crimes under the draconian UAPA.”

Would any other government in Delhi—headed by the Congress or any other party—have arrested a public intellectual of Anand Teltumbde’s stature under the draconian UAPA? It’s a moot question. Human rights-based activism by intellectuals is a legacy of Ambedkar, Nehru and Rammohar Lohia and dates back to the freedom struggle. The dubbing of professors or lawyers as ‘Urban Naxals’ is a strange phenomenon that arose after the BJP/RSS came to power at Delhi in 2014.

Yes, some lawyers may choose to defend—on sound legal principles—the human rights of people who work with different organisations, including those of Maoist persuasion. Those who target them forget one fact: activists of the Rashtriya Swayamsevak Sangh arrested during Indira Gandhi’s Emergency were also defended by human rights activists, though they did not agree with their ideology hundred per cent.

That distinction is absolutely crucial. Anand Teltumbde’s human rights-based support to Maoist activists cannot be construed to mean that he himself is an ‘Urban Maoist’. Even the fact that his own brother is a Maoist leader cannot be cited as a reason for implicating him under such a draconian law and putting him in jail for years without a scope to get bail. Which law in the world allows that?

The BJP/RSS pretends to respect Ambedkar but does not respect his idea of India, which is based around free speech. That someone like Anand Teltumbde, who cultivates his sympathies for India’s productive masses while teaching at an IIT or IIM, could end up being targeted under the UAPA is an extremely ironic aspect of BJP/RSS style democracy. A serious belief in democracy needs a firm belief in human rights. So far, the ruling BJP has not shown any deep respect for human rights, which is an integral part of constitutionalism.

The Maoist belief in revolution—inherently a violent process—is not a supportable ideology either. It is not compatible with a democracy built around Ambedkar’s core ideas of a constitutional republic. Many of us have been asking them to give up that ideology of armed struggle and adopt electoral methods of politics—even of Marxist colours—to advance Ambedkar’s idea of India, within the framework of his Constitution. They can work for socialist welfarism after having come into the democratic process.

The RSS advocates its own ideology of violent nationalism vis-a-vis Muslim minorities and other ‘others’. Except in the context of Mahatma Gandhi’s assassination by Godse, the RSS has never faced the wrath of the Indian state in such a harsh manner, even though it too believes in violence of its own mode. They never believed in the non-violence of Ambedkar or Gandhi, and yet their activities have never been brought under a UAPA-style Act. Why are they doing this—championing its use against public intellectuals who defend civil rights? This anti-human rights stance of the Centre causes grievous injury to the Constitution that Ambedkar put in place.

The Supreme Court should have taken a lenient view of Teltumbde and Gautam Navlakha’s case. The whole nation is in great psychological stress as it is, sitting at home and contemplating its future. The spectacle of respectable public intellectuals being sent to jail for no established crime of theirs will only add to that feeling of great abnormality—by bringing up visions of a serious constitutional crisis.

The world over, hundreds of people charged with serious crimes are getting released from jail as a humanitarian gesture, to be with their families in these dark times. Teltumbde’s two daughters also wrote an open letter saying their father should not be sent to jail amid such a global pandemic, as that would put their mother in great psychological stress and loneliness.

Prime Minister Modi, who invoked Ambedkar in such glorious words, must intervene and see that the case against Anand Teltumbde and Gautam Navlakha is dropped. In this case, there is also an angle being offered by the prosecution that, at the Bhima Koregaon gathering, a conspiracy was hatched to kill the Prime Minister. It is just unbelievable that public intellectuals like Teltumbde and Navlakha would be part of such outlandish conspiracies! One hopes the PM dismisses such childish theories and advises the NIA, in whose custody Anand Teltumbde would be, to drop the case.

(Kancha Ilaiah Shepherd is a political theorist, social activist and author. The views expressed are personal.)