Undoubtedly, the Assamese are angry over the CAB and their fears over it need to be genuinely allayed. But they have reasons to be disappointed with themselves as well for not having paid more attention to what the BJP and its leaders said during the last election campaign. 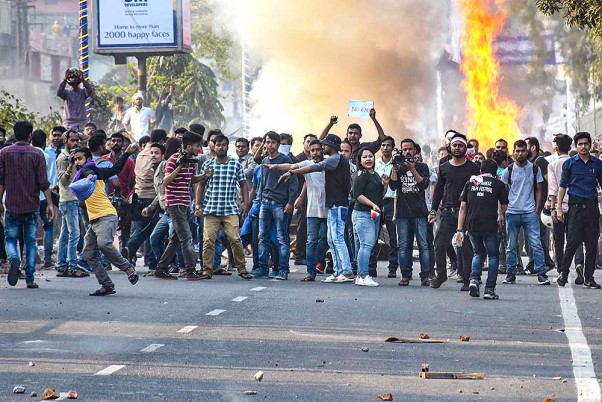 Protesters clash with the police during their march against the Citizenship (Amendment) Bill, 2019, in Guwahati.
PTI Photo
Ruben Banerjee 2019-12-11T18:38:24+05:30 Opinion: Assamese Are Angry, But Didn’t They Vote For Citizenship Amendment Bill?

The irony is baffling. Having resoundingly voted for the BJP in the 2019 Lok Sabha elections, the Assamese are out on the streets in very large numbers, protesting the Citizenship Amendment Bill (CAB) that they fear would legalise illegal migrants from Bangladesh and make themselves a minority in their own state.

In a state with deep-rooted demographic fears, the outpouring of public anger is understandable. What is, however, not understandable is why did the Assamese vote for the BJP when it was amply clear that the party was hellbent on bringing the CAB.

For once, the politicians cannot be condemned for their customary double-speak. In rally after rally in the run up to the elections, Union Home Minister and BJP president Amit Shah repeatedly stressed that the party would bring the CAB if voted back to power. The party’s election manifesto too emphasised on it. So, in more ways than one, the people of Assam knew what they were voting for when they headed for the polling booths in the summer of 2019.

The outcome of the vote was overwhelmingly positive for the BJP. It won 9 of the 14 Lok Sabha seats, an improvement over its tally of seven in the 2014 polls. Its vote share did not decline in 2019 despite the prospect of CAB.

The logical question therefore to ask now is why are the Assamese angry, having backed the BJP which made no bones about bringing in the CAB.

A ready answer to the puzzle is difficult. But an easy rationale could be that it was collective naivety that had BJP as the clear winner, notwithstanding the CAB. Not that the Assamese voting against the party would have changed much. Even a loss of all 14 seats would have left the BJP and its allies comfortably placed in the parliament, empowered to do pretty much of what it wanted.

But first voting for the BJP and then opposing it vehemently does put the people of Assam in an awkward spot. Always given to assertions of Assamese nationalism and particularly sentimental over nagging fears about their local identity being beleaguered in their home state bordering Bangladesh, the protests over CAB are threatening to spin out of control. Students have come out in very large numbers, forcing ministerial convoys to reverse and flee and trapping the chief minister at the airport for hours. As the situation turns grim, the Centre has rushed paramilitary troopers from Kashmir to beef up security in the state.

Undoubtedly, the Assamese are angry over the CAB and their fears over it need to be genuinely allayed. Having fought long and hard to rid their state of illegal migrants from Bangladesh with little result, the present escalating protests could be an expression of pent up frustration. The most common apprehension is that tens of thousands of non-Muslim migrants who reportedly have taken refuge in Assam over the years would now become citizens, putting further pressure on the state’s limited resources and endangering locals - their identity and livelihood included.

One can empathise with the protesters in Assam. Tired of a long Congress rule that did little to address their grievances over illegal immigrants, they chose to side with the BJP in 2014 and then again in state elections in 2016. Along the way, they were tantalised by the NRC which promised to weed out the ‘unwanted’, but at the end of the process could identify only 19 lakh people, a figure far below the popular expectations.  More disappointing for the Assamese is that the CAB could allow very many non-Muslims in the NRC exclusion list of 19 lakhs to become Indian citizens.

But all said and done, the Assamese have reasons to be disappointed with themselves as well for not having paid more attention to what the BJP and its leaders said during the last election campaign. What was to come was obvious, but they simply failed to read it.

Opinion | Explained: What Is Citizenship Amendment Bill? Which States Are Exempted And Why? What Next?