We were not down in the dressing room after the defeat. We knew the factors which we were up against on the day. It's Tuesday when all will count. 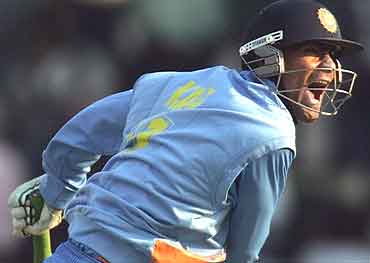 I knew in advance that I would not be playing the tri-series match against the Indians on Friday. It was not a surprise; I had been prepared for it even before we took on Zimbabwe on Wednesday.

I can't really say I enjoy sitting on the sidelines. When the boys are in the park and in the thick of it, you want to be one of them. It is kind of bizarre to be in the dressing room for the full length of a game and do nothing but watch. But it was a luxury which our side could afford, we want different players to be ready at times.

It is not fair to say that without Daniel Vettori or me, the attack is toothless. When you put out an eleven in the park, even in the days of Super Sub, it is only eleven in the field! You expect the boys to win.

But we did not bowl as well as we could have and the Indians were picture perfect with their plans. The openers came out with guns blazing and it did put us a bit down, shifted the pressure on us.

Mohammad Kaif was beautiful to watch, composed and elegant, his strokes making that sweet ring of sound around the park which is ominous to the ears of the bowlers. We knew he can rotate the strike well but this day, at least in the first half of his batting, he dealt only in boundaries. He has given his team a lift for the coming days.

Before one runs away with the impression that the genie is out of the bottle, the cat out of the bag and the Indians would leverage this win in the finals, it is important to remember two mitigating factors: one, we did not bowl as well as we normally do and the wicket suited the Indians to a hilt.

It was a wicket which was right up their lane. The Indians had the skill and the patience to carry the day. We always like to test their skills with chest-high stuff but this strip had little of it. Jacob Oram with his height allows the ball to gain lift but he could not bowl his full overs. He should be alright for the finals and to keep him under wraps after just five overs was precautionary in nature.

I also would like to think that I can be a different query for Virender Sehwag. We made the mistake of giving him width on Friday and it roused his destructive instincts to the full. I have a good inswinger and pace which might not allow him to free his arms. He was the essential component in the heady cocktail which the Indians served on Friday.

We were not down in the dressing room after the defeat. We knew the factors which we were up against on the day. We were also not as emotional as we would be for the finals. So it's Tuesday when all will count

The Indians would be hoping the break of six days would do funny things to my rhythm and the pressure of leading the attack could tell on me. I remember before the 2003 World Cup there was a break of 15 days but it did not hurt me.
As for the pressure of leading the attack, it does not even register. When I bowl, I concentrate on my job and try to be patient with myself. Things then take care of themselves.

These are the basics I would like to stick to for the big game. In the park it is a contest and the Indians would take some beating. I have liked the way their fast bowlers have shaped up, who can move it in or take it out to trouble the best in the business.

When I compare my craft, I do not have a pronounced outswinger but at that pace very few can do it either way. I am trying to develop a slower delivery and you would see it before long.

There is also enough about the Indian batting which I admire. I value Rahul Dravid's wicket perhaps more than most and it's because his defence is tight and technique brilliant. There is something about the great batsmen, men like Sachin Tendulkar and Brian Lara, who seem to have loads of time even when you are bowling at your fastest.It makes you worry if you are not bowling quick enough!

No such thing for now. Onward to Tuesday and the final.