On An Arty Trail In Moscow

More from Neeta Lal
View All

Moscow's rich history and glorious antiquity are best showcased through its fascinating array of museums and art galleries. While the former Soviet Union frowned upon self-expression, a cultural renaissance is currently rippling across a more politically liberal and modern Moscow. Mint-fresh museums and avant-garde galleries promoting fresh, young talent are mushrooming, former factories, warehouses, and grand old mansions are being transformed into showcases of culture even as street art is organically moving from the realm of the subterranean to claim its rightful place in the sun.

No place in Moscow illustrates this cultural revolution better than Gorky Park, the Stalin-era recreation ground that now stands transformed into a vibrant and inclusive oasis hosting the Garage Museum of Contemporary Art, atmospheric cafes, bars and two skate parks.

Further fuelling the Russian capital city's reputation as one of the world’s most exciting destinations for contemporary art are high-profile events like Moscow’s Biennale of Contemporary Art. Investment in art too, has surged following demand from the country's burgeoning rich who are snapping up not only paintings and sculptures at gasp-inducing prices at global auctions, but also unconventional art forms like icons and old Russian manuscripts. 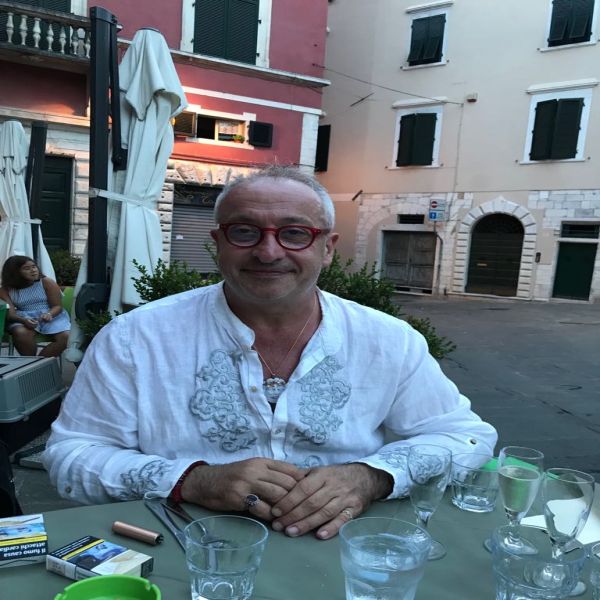 More favourable and transformed international attitudes towards Russian art aren't hurting either. Many of the world’s leading auction houses -- including Christie's and Sotheby's -- have launched specialised sales to cater to the Russian collectors’ love of Russian art. All this has bestowed upon Moscow the gravitas traditionally reserved for more established western art meccas like London, Paris, New York and Milan.

According to European art dealer Stephan Stoyanov, who represents many of Moscow's acclaimed artists, the city's contemporary creative ecosystem has much to do with its new-found status as a global art hub. "In  today's Russia, a more progressive political and cultural landscape is driving Russians to be more resourceful in their attempts to create a country that is liveable and enjoyable. The result is a creative renaissance that is replacing the city's earlier less sophisticated displays of wealth and power."

Be that as it may, even among the city's bewildering range of museums and galleries, there are some that truly  distinguish themselves:

Ensconced inside the Russian Academy of Arts on  21, Prechistenka Street in a beautiful historical building, the eponymous Zurab Tsereteli Art Gallery is a tribute to the genius of one of Russia's most celebrated and controversial artists --  Zurab Konstatinovich Tsereteli. 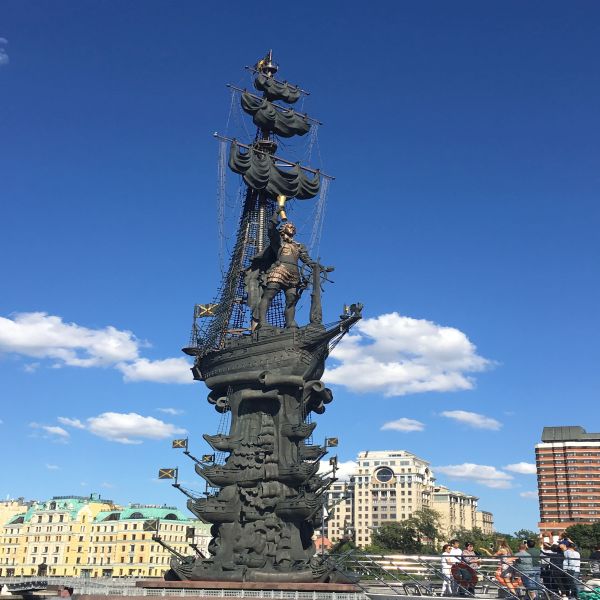 The $20m statue of Peter the Great near Moskva river is Zurab Tsereteli's most defining artwork in Moscow.

Among the gallery's mindboggling collection are hundreds of oils, sculptures, murals and installations done by the 84-year-old maestro acknowledged as a cause celebre among a pantheon of Russian greats. Many of the artist's creations are mounted on a scale that defies human imagination. At the atrium of the 10,000-square feet gallery, I feel like a pygmy among titanic sculptures of historical figures, Presidents, heads of states, kings and queens and mythological Gods and goddesses.

Across me crowded on a bronze podium stands a family of a Russian tsar being readied for execution, their eyes closed symbolising death. To my left, a pensive Alexander Pushkin sits cross-legged on a sofa, his sharply defined silhouette, the folds of his apparel and the details of his fashionable footwear underscoring the artist's meticulous eye for detail.

Most intriguing, however, is a supersize interactive sculpture called `The Apple' --  positioned smack dab in the atrium's middle -- through which visitors can walk. "It traces the history of human passions from the Fall," the guide explains as I amble into the installation's cavernous innards. Inside, glowing walls are awash with murals of men and women standing in kamasutra-like poses, apparently Tsereteli's ode to Indian culture as depicted in ancient scriptures. The Apple's perimeter is embellished with monumental reliefs based on Biblical imagery of spiritual rebirth. 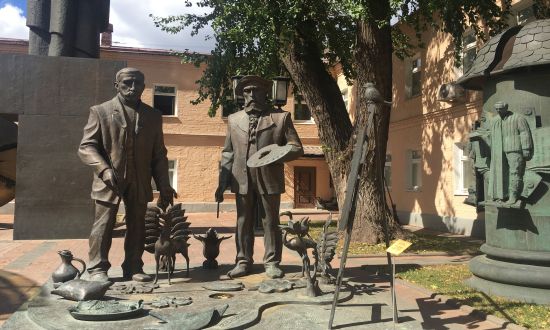 Ever since it opened in 2000, the gallery has attracted high footfalls from tourists and art connoisseurs alike.  Much of it no doubt has to do with Tsereteli's larger-than-life personality. The colourful artist born in Tbilisi, Georgia, is not only the President of the prestigious Russian Academy of Arts but a master craftsman who has single-handedly transformed Moscow's skyline with his prolific and prodigious output. Not everybody is a fan, but that has hardly restricted the octogenarian from producing a phenomenal body of work. The  mammoth $20 million, 150-foot nautical bronze statue of Peter the Great jetting up from an island in the Moscow River being the most representative work of the versatile Modernism-inspired artist. 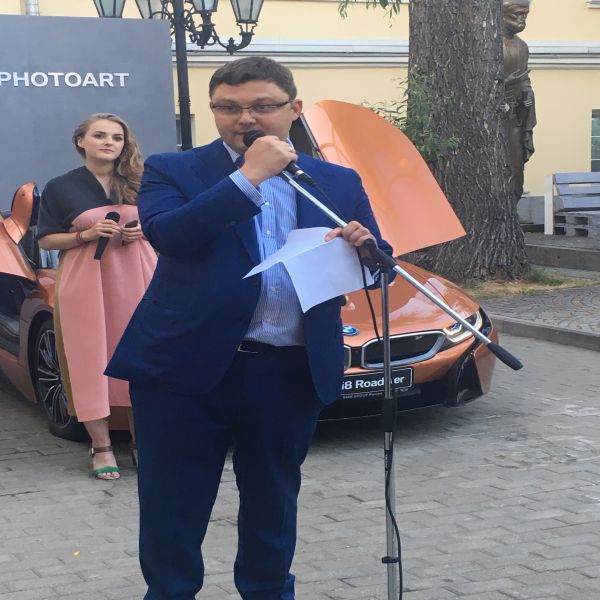 Tsereteli's global empire straddles many continents. There's a private museum in Georgia, a gallery in Russia and studios in Paris, New York, Tbilisi and of course Moscow. His epic bronze and copper showpieces pepper cities like New York, Italy and Spain. In 2016, a 268-feet statue of the Italian explorer Christopher Columbus was unveiled in Puerto Rico. Tserteli crafted it from 2,500 pieces of bronze and steel manufactured in Russia and some 2,000 sq. ft of copper sheets.

The artist's oeuvre encompasses oils, sculpture, murals, mosaics, installations and more. However, none of his galleries are as intriguing as this stellar one in Moscow.

The day I visit MMOMA, Moscow's first state museum that opened in 1999, is a beehive of activity showing no less than nine exhibitions. There's "The Untold Story" by Steve Mc Curry which includes more than 80 works of the iconic American photographer including his snapshots as a reporter-photographer in war-torn regions, fragments from his notebooks, routes of his movements and another unique series of photographs around the world.

Another hall has art lovers crowding around a joint project of artists Anatoly Osmolovsky and Alexander Golinsky "Soft Face" while the ground floor is showing "Architecture, Doomed to Optimism" , a project that combines for the first time in Russia the most significant images in the history of architecture, dating back to the 18th century. 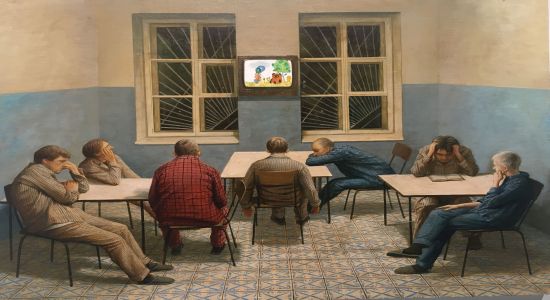 It is this dynamism and creative energy that defines MMOMA today.  Focussing exclusively on the art of the 20th and 21st centuries, the organisation -- that began with some 2,000 modern art pieces from Zurab Tsereteli's private collection in 2000 -- currently has over 10,000 and has morphed into a significant art destination on Russia’s cultural landscape. All this is largely due to the dynamic leadership of one man -- Vasili Tsereteli, the current Executive Director, a student of the New York School of Visual Art and Parsons School of Design.

Thirty-something Tsereteli has worked single-mindedly to help MMOMA garner international prestige  with his strategy of housing the finest collection of Russian modern and contemporary art in the world. At the same time to augment the museum's global appeal, works by renowned Western masters -- graphic pieces by Pablo Picasso, Fernand Léger, Joan Miró and Giorgio De Chirico are also on view, along with sculptures by Salvador Dalí, Armand and Arnaldo Pomodoro, paintings by Henri Rousseau and Françoise Gilot, and installations by Yukinori Yanaga.

Due to its impressive acquisitions of modern and contemporary art, MMOMA has expanded from one to five venues across Moscow. The flagship building, sited on Petrovka Street, in the former 18th-century mansion house offers three exhibition venues: a capacious five-storey building in Ermolaevsky Lane, another multi-tiered gallery in Tverskoy Boulevard, the State Museum of Modern Art of the Russian Academy of Arts and the Zurab Tsereteli Studio Museum.

One of Moscow's leading contemporary art galleries, Ruarts is at the forefront of a pioneering movement that is pushing the boundaries of Russian art. Founded by high-profile Russian art collector Marianna Sardarova in 2004, the first thing that strikes a visitor about this handsome gallery (located in the “museum quarter” of Moscow), is a prominent central staircase and the sheer brilliance of its layout. Paintings, drawings, photography, sculptures and installations all find representation in its various niches, corners and walls accentuated by a clever play of light.

According to the gallery's Art Director, Catherine Borissoff, RuArts' forte lies is its diversity and range. "We represent and exhibit both Russian and foreign contemporary artists and sculptors.  We were also the first to bring expositions of worldwide stars such Spencer Tunick, Erwin Olaf, Nobuko Watabiki, Herve Ic and Kimiko Yoshida to Moscow," she explains.

In a bid to popularise Russian art overseas, Ruarts works with both foreign and home-grown artists for shows abroad. This correspondent was in Sofia, Bulgaria, to attend feted Russian photographer Sergei Borisov's show `Zeitgist' organised by Ruarts. The show had several of Borisov's award-winning photos (including his famous nudes) chronicling different periods of history. Also a part of the show were photos like ‘Catwalk’ (1987), ‘Glasnost' and Perestroika’ (1986) -- which capture symbiotic relationships between the subject and its surroundings and had won the artist global acclaim.

One of the world's few private, single-artist museums, the Anatoly Zverev (AZ) Museum, located on 20-22 Second Tverskaya-Yamskaya Street is truly a museum with character. Founded by collector and arts patron Natalya Opaleva and art curator Polina Lobachevskaya in 2013, its focus is exclusively on the works of enigmatic Russian artist Anatoly Zverev, a member of the non-conformist movement and a founder of Russian Expressionism in the 1960s.

Today, the museum owns over 1,500 works by Anatoly Zverev and over 500 works by non-conformist artists of his circle (Plavinsky, Nemukhin, Rabin, Krasnopevtsev and many others). The AZ Museum's growth has been organic, its repertoire expanding around the personal collection of Opaleva. In 2013, Aliki Costakis, daughter of the famous collector George Costakis, donated over 600 works by Zverev to the museum, along with archival materials from her father’s collection. 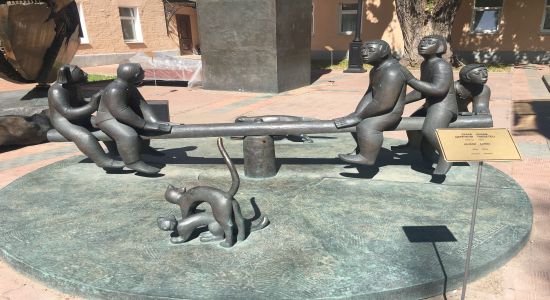 Works at MMOMA by Zurab Tsereteli.

What augments the museum's appeal further is that Zverev did not have a single solo show in Russia until shortly before his death in 1986. So a high level of secrecy shrouds the temperamental artist's body of work. His expression of pain and anguish (he was harassed and persecuted by the Soviet authorities especially as his international success grew) through his abstract human figures lends poignancy and purpose to AZ's collection. According to Opaleva, Zeverev remains one of Russia's most imaginative 20th century artist. "He was an important contributor to the Russian Expressionist movement of the 1960's and his works are characterized by an agitated technique of emotional abandon. Zverev created from his heart regardless of political and social constraints, the fashion of the times or even expectations of commercial success," states the passionate gallerist.

(The author is a Delhi-based editor and journalist)