Dola Banerjee's world title took archery to the next level and raised Olympic hopes in the country of a billion that shudders every four years in the fear of returning from the quadrennial event empty-handed. 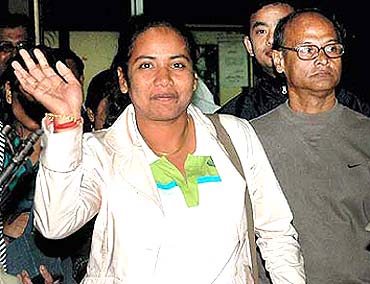 Dola Banerjee's world title took archery to the next level and raised Olympic hopes in the country of a billion that shudders every four years in the fear of returning from the quadrennial event empty-handed.

With less than a year to go for the Beijing Games, Dola's gold winning feat at the Dubai World Cup finals has not only made her a strong contender for podium finish in the mega event but also raised India's hopes for a better haul of medals in the Dragonland.

Dola's career, which was going steady till recently, had a sharp take-off in the later half of this year as the girl with the golden arm finished on top of the podium thrice in four months.

The Arjuna awardee's tryst with the yellow metal started in early August this year as she clinched the women's recurve individual gold in the fourth leg of the World Cup in Dover.

Days later, at Lord's, the Mecca of cricket, she bagged the team gold along with Chekrovolu Swuro and L Bombayla Devi at the triangular npower International Archery Challenge, involving Great Britain and China.

Dola continued with her golden form in the Dubai World Cup finals in November as she sprang a surprise by pipping Olympic champion Korean archer Choi Eun Young in a cliffhanger to become the world champion in her pet event.

In July, Dola and her teammates had brought cheers for India by booking three berths for the country in the 2008 Olympics after making it to the quarterfinals of the Leipzig World Outdoor Championships, which otherwise had a lot of disappointment in store for the Indian camp because of the below par performance of the men's team.

The year, however, was not a memorable one for the men archers, who slumped on many occasions before salvaging some pride by winning the team recurve gold by overcoming the Malaysian challenge at the Asian Archery Championships in Xian, China, in September.

In that tournament, they managed to earn only two Olympics qualification spots for the country for the 2008 edition, ruling out the possibility of India's participation in the team event of the Games.

Meanwhile, away from the limelight, three junior archers -- Adonda Raju, Rajib Basumatary and Ravinder Hembram -- made the country proud by setting a world record at the Cadet World Archery Championship in Mexico in October.

The Indian recurve team, which had bagged the bronze medal, scored a total of 441 points in the team finals (aggregate of semi-finals and finals) against gold medal winner Turkey's 438 points.

With the potential to take on the best in the world, the Indian archers would take heart from Dola's achievements to give their best and bring home laurels from the quadrennial event next year.