Abhijit Iyer-Mitra had allegedly made derogatory remarks against Odisha’s Konark temple during a recent trip to the state in the company of Baijayant Jay Panda, former MP of the ruling BJD. 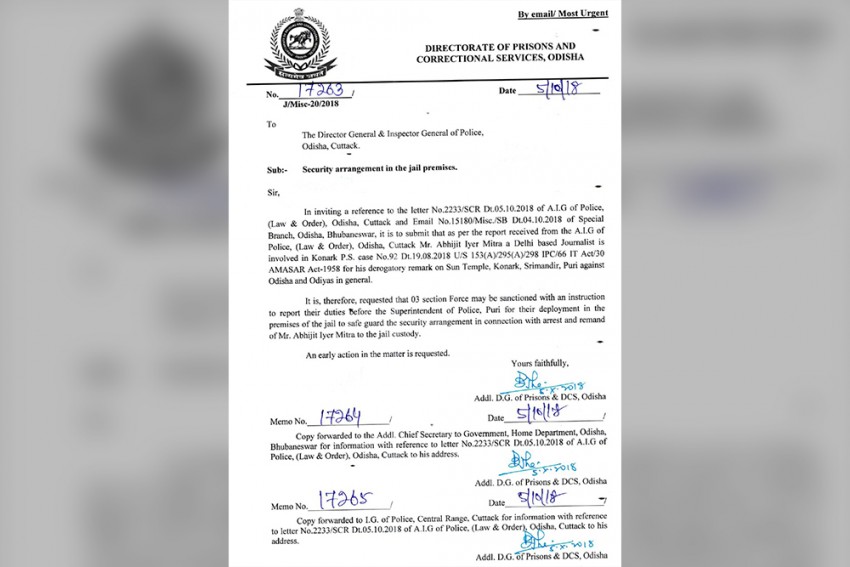 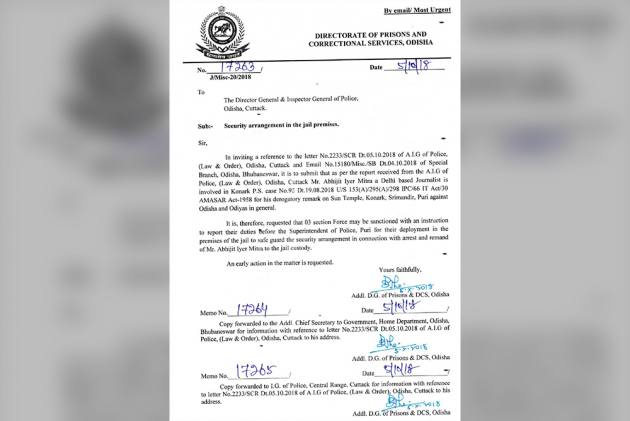 The Odisha police is gearing up to arrest Delhi-based journalist and commentator Abhijit Iyer-Mitra when he appears before the police in the seaside town of Konark on October 10.

In an official note accessed by Outlook, additional D.G of Prisons, Odisha has asked the Director General and Inspector General of Police (Note No. 17263, Dated 5/10/2018) for extra force to be sanctioned and has asked Superintendent of Police, Puri, within which Konark falls, to make extra security arrangement in connection with the arrest and remand of Iyer-Mitra.

"It is therefore, requested that 03 section Force may be sanctioned with an instruction to report their duties before the Superintendent of Police, Puri for their deployment in the premises ofthe  jail to safeguard the security arrangement in connection with the arrest and remand of Mr. Abhijit Iyer-Mitra to the jail custody," reads official letter.

Iyer-Mitra was denied relief by the Supreme Court on Thursday. A three judge bench of the Supreme Court, headed by Chief Justice of India (CJI) Ranajn Gogoi, said: "Your comments incite religious feelings. How are you entitled for bail?"

Responding to Mitra's counsel's arguments that his life is in danger, CJI Gogoi said: "If you say you face threats, the safest place for you would be in jail. Your life will be secure. You have incited religious feelings."

Iyer-Mitra had allegedly made derogatory remarks against Odisha’s Konark temple.

Iyer-Mitra has been in the eye of controversy ever since he flew over Chilika Lake with Baijayant Jay Panda, former MP of trhe ruling Biju Janata Dal (BJD) . Panda has fallen out with Odisha CM Naveen Patnaik and has since been expelled from the party.

A case was also filed against Panda as well for allegedly flying his helicopter over Chilika Lake in violation of rules. Though only one helicopter was used, the Odisha police has since ceased three choppers owned by the family of Panda.

Iyer-Mitra insists what he said on the video, that has since gone viral,  was meant to be just a satire, but many of the state residents were outraged and there have been clamour for ‘exemplary’ punishment.

Panda has also been in the cross-fire for flying Iyer-Mitra at the first place.