Five nuns had protested near the Kerala High Court at Kochi for 13 days, demanding the arrest of the bishop who was accused of repeatedly raping a nun. 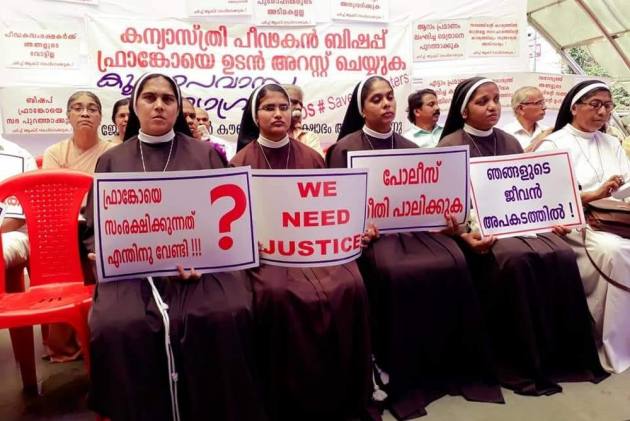 A nun belonging to the Syro Malabar Catholic church alleged she was asked to keep away from church duties after she participated in a protest by nuns in Kochi demanding the arrest of rape accused Bishop Franco Mulakkal.

Sister Lucy Kalapura, who returned to Wayanad Sunday morning from Kochi, claimed she was informed orally by the Mother Superior that she should keep away from holding catechism classes, conducting prayers and other church- related duties.

"No written orders were given to me. I was only informed orally by the Mother Superior not to participate in any church-related activities," the sister told PTI.

The church could not be contacted for comments.

Five nuns had protested near the Kerala High Court at Kochi for 13 days, demanding the arrest of the bishop who was accused of repeatedly raping a nun.

There was support for the protest from various quarters and Sister Lucy had also expressed her solidarity.

The clergyman, who temporarily relinquished his administrative responsibilities as Jalandhar Bishop, was arrested Saturday after three days of intense grilling by the Kerala Police.

The nun said no explanation was given to her for the decision and the restraint message from the vicar was conveyed to her through the Mother Superior.

According to media reports, the Mananthavady diocese had recommended disciplinary action against Sister Lucy three months ago for allegedly posting some statements against the church in the social media, for purchasing a car through a loan and not wearing the nun's attire at a public function.

However, Sister Lucy denied the charges, saying the restraint order against her was only for participating in the protests at Kochi.

"I feel saddened that I have been asked to stay away from church duties. I had conducted holy mass till last Sunday.I got a lot of support from people of the congregation.

"I have done no wrong nor said anything against the church. No reason has been given for the decision," she said, adding she would be happy if the church clarified where she had erred.

Indulekha Joseph, one of the leaders of the Kerala Catholic Church Reformation movement, alleged it was an attempt to silence the voices of protest against any form of unjust activities within the church.