All utility vehicles are witnessing drop in sales except for one of these. 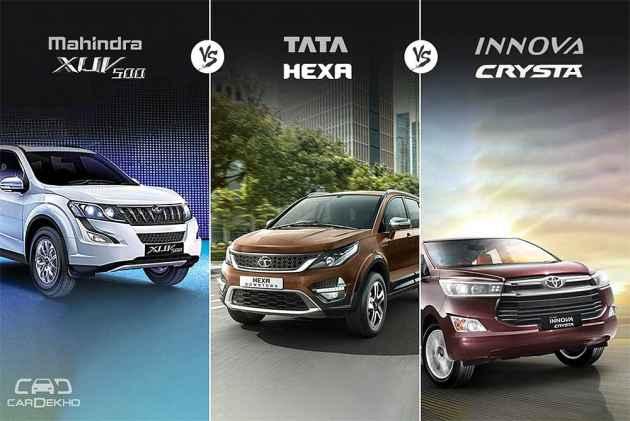 The utility vehicle segment has been witnessing dropping sales recently as we conclude from the sales reports. As most UVs are preferred with a diesel engine, the axe from eco-warriors is looming large over them, taking valuable customers away from them. While the Innova Crysta has had a petrol engine for a couple of years, the XUV500 just recently received one. The Tata Hexa doesn’t even feature it as an option. But petrol engines are rarely chosen by those buying a seven seater MUV.

While the reasons could be much more diverse we’ll just stick with the sales performance for the time being. However, we will bring a detailed article on the changing customer preferences later on.

Tata’s flagship SUV couldn’t do as good as the company must have expected to. The sales have dropped by 26 per cent and we believe that the increase in October was due to the Diwali festivities. Same can be said about the XUV500 because its sales have dropped by more than half and some of the blame can be passed on to the Jeep Compass, which might not be in the same segment but is priced similarly. The Toyota Innova Crysta in the comparison just stands out as a shining example of ideal sales figures. The MPV has consistently managed to clock entry-level car-like numbers and even registered a hike, however small it maybe.

The Tata Hexa was launched earlier this year so there’s no year on year comparison for the Aria-based crossover. For the XUV500, Mahindra has done a fair job with a 15 per cent increase over the past year. But the Toyota Innova has the XUV500 on its knees with an increase of a whopping 35 per cent in sales over the year, taking it to the 14th spot of highest selling models of November 2017. Moreover, the Innova Crysta happens to be the priciest vehicle of all the top selling models in the top 15 for the previous month.