The revolutionary treatment of cancer, immune checkpoint inhibitor therapy targets proteins made by some immune system cells, as well as some cancer cells. 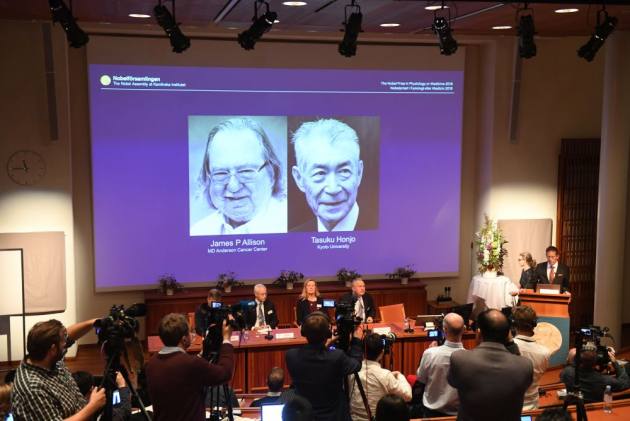 Two immunologists, James Allison of the US and Tasuku Honjo of Japan, won the 2018 Nobel Medicine Prize "for their discovery of cancer therapy by inhibition of negative immune regulation," the Nobel Assembly said.

The revolutionary treatment of cancer, immune checkpoint inhibitor therapy targets proteins made by some immune system cells, as well as some cancer cells.

The proteins can stop the body's natural defences from killing cancer cells. The therapy is designed to remove this protein "brake" and allow the immune system to more quickly get to work fighting cancer.

The duo will share the Nobel prize sum of nine million Swedish kronor (about USD 1.01 million).

They will receive their prize from King Carl XVI Gustaf at a formal ceremony in Stockholm on December 10, the anniversary of the 1896 death of Alfred Nobel who created the prizes in his last will and testament.

Last year, US geneticists Jeffrey Hall, Michael Rosbash and Michael Young were awarded the medicine prize for their research on the role of genes in setting the "circadian clock" which regulates sleep and eating patterns, hormones and body temperature.

For the first time since 1949, the Swedish Academy has postponed the announcement of the 2018 Nobel Literature Prize until next year, amid a #MeToo scandal and bitter internal dispute that has prevented it from functioning properly.