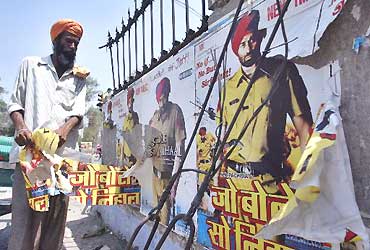 Whoever says this, is blessed:
"That One outside of Time
Is Truth."

The film Jo bole so nihal opens with these words appearing on the screen: "This is not a religious film". My companion in the theatre leans over to me, and says, "We never thought it was. Why the disclaimer?" I whisper to him in the silent hall, "It’s the way things are, now, in this country. You can never be too careful." Seconds later, the audience erupts into laughter. For the next three hours, we can’t stop laughing. At some points, spectators clap their hands, they whistle, they stand up and applaud – the lines are so funny, the situations so absurd.

Before property was damaged, people got injured, and lives were lost in a fresh spate of the intolerance that has become a permanent threat to creative freedom in India, Jo bole was just another comedy. In a film industry that is always low on comic relief, a movie that actually manages to amuse ought to get a special prize. Instead, inevitably, the producers have had to withdraw it from circulation in the face of censorship that can, at any moment, turn violent, endangering the life and safety of actors and viewers alike.

Growing up with a Sikh mother and a Hindu father, I got to see the famous clash of civilizations between Punjabis and UP-wallahs from both sides of the imaginary fence. From Lahore and from Lucknow, driven by forces of history larger than us all, my parents came to Delhi more than half a century ago.

Like so many of my generation in this city, my experience of the linguistic environment was a grating, head-on collision of Punjabi and Urdu; depending on the season’s fashion, the bottom-half of a kurta suit invariably alternated between a salwar and a churidar pajama, and the seasoning in the food, while always tasty, kept switching between the wholesome tadka and the spicy chhaunk. Passing by the mandir one folded one’s hands and raised them to one’s brows, closing one’s eyes and bowing one’s head momentarily; passing by the gurudwara one muttered, quickly, under one’s breath: "Jo bole so nihal, Sat Sri Akal". It wasn’t necessary to actually stop and go into either house of worship – gods and gurus are easily appeased by gestures of respect made from a safe distance.

In Delhi’s social gatherings, the rule for jokes was that they were always about sardars, but the other rule was that it was usually sardars who told them with the greatest glee. Everybody could laugh at these jokes, because they never rose above the lowest common denominator of silliness – the real trick, however, was to tell them with the right Punjabi accent. Even at the height of the militancy in Punjab, sardar jokes proliferated, only then they were fine-tuned for a while to take pot shots at the idea of Khalistan.

In 1984, my mother and the entire family on my mother’s side suddenly became the targets of the most gruesome anti-Sikh violence; for days of curfew that horrible November, we stood on our rooftop, my parents and I, watching fires burn in all directions on the near horizon.

We knew – even I, as a child, could tell – that a composite way of life had ended forever, charred to a handful of ashes along with the turbans, beards, holy books, homes and dreams of thousands of innocents. But immigrant and refugee cultures are the most resilient. Despite the slaughter of Sikhs in the aftermath of Indira Gandhi’s assassination, in the following two decades, Delhi’s dominant temper became more aggressively Punjabi than ever before.

Justice may not have come to the Sikhs, but Punjabis have had their revenge all right. Gentility, refinement, politeness, delicacy, reticence, literacy, sophistication – all the residues of Nawabi high culture from the Gangetic plains, lingering in Dilli after Partition, disappeared without a trace, leaving behind a rough-and-tough city, loud, in your face, upwardly mobile, not for the ninnies. Why only the capital of India – its main repositories and representatives of popular culture, Bombay film and the music industry, seem to have, in the last twenty years, completely abandoned the niceties of Urdu speech and verse, and gone Punjabi with a vengeance.

Once again today, with the unseemly agitation about a quintessentially Punjabi film, a film that is really only a completely silly and therefore by-definition hilarious sardar joke stretched over a couple of hours, it is the Punjabi, and especially the Sikh capacity to get on top of every adversity, that is under attack. Even more alarming, the Sikh genius for self-deprecation is in danger of being replaced by that familiar absence of irony that characterises any culture when it begins to lose confidence in itself. In our country, fewer and fewer communities now retain the slightest capacity to laugh at themselves, which actually betrays their inability to believe that others will take them seriously.

Jo bole takes every cliché about the Sikh temperament, and plays it out to its funniest limit. Sunny Deol, in the role of the protagonist Nihal Singh, is proud, patriotic, emotional, devout, simple-minded, trusting, brave, gullible, sincere, pious, virile, childlike and energetic. He worships his mother and his country. He doesn’t smoke, but he does drink. He swears by the medicinal properties of the red onion. He loves his babe with a curious mixture of coyness, docility and unreconstructed machismo. His attitude to sex achieves an impossible (but endearing) synthesis between the ascetic and the animal. He travels superbly, but is eternally homesick. He works hard at being a rural cop from the Punjab, but can teach the FBI a trick or two in homeland security. If Nihal were put in charge of the War on Terror, Osama would have surrendered long ago his leadership of the Evil Empire, and been rehabilitated as the sarpanch of some god-fearing Afghan village, a bearded and benign leader of his band of ex-jihadis, atoning for his sins by raising crops and cattle (or whatever it is they raise in lands not blessed by the Green Revolution). 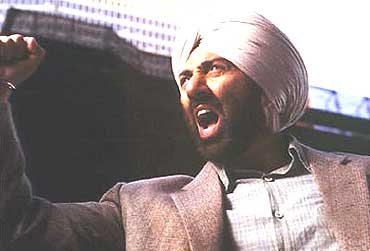 "You are all idiots," Nihal Singh says to the law-enforcement officers of the United States of America, looking the uniformed and bewildered Americans in the eye. "Some chaps you brought to your country and trained to be pilots, took your planes and crashed them into your buildings. Now you’re crying about it." Country-bumpkin he may be, but the sardar has a point. Fancy surveillance cameras and pretty Apple PowerBooks cannot achieve for the hapless Americans what Nihal Singh can do with bare hands: With a little help from his baton: bring the bad guy to his knees, clad, in a somewhat macabre reference to Guantanamo Bay, in an orange jumpsuit, his hands and feet in chains.

As for the female characters – the hero’s old mother, his thin unmarried sister back home, his fat married sister in America, and his FBI agent NRI girl-friend who starts out as his colleague and ends up as his wife – together they exemplify every proverbial virtue of the sikhni: kindness, intelligence, vigilance, sweetness, fearlessness, oomph, resourcefulness, tomboyish vigour, unimpeachable honour, ability to live with pizzazz at home or abroad, and of course, long silky hair to die for.

Between them, jatt Nihal and his gorgeous kudi, with a chorus of local cab drivers, rule the streets of New York City. Who says Empire is American? Empire is Punjabi, and it’s time the world woke up to smell the lassi. Didn’t Shah Rukh, Preity and Saif, cavorting in Manhattan and running across the Brooklyn Bridge just as effortlessly as Sunny and co., already tell us that last year, in the block-busting Kal ho na ho?

Which is why the fuss about Jo bole in India, coming from some Sikh quarters, is even more distressing.

If by some means we were able to find out what most Sikhs felt about Jo Bole, would their collective opinion qualify as the arbiter of the film's fate, over and above the law, the censor board, and the response of a general (that is to say, mixed Sikh and non-Sikh) audience? In all events, whether or not anyone likes this film, and which community likes it or dislikes it, at what point does it become justified to express disapproval and disagreement through violent means?

Instead of feeling Sikh sentiments to be injured by this assertively sardar movie, Sikhs ought to revel in it, enjoying its gutsy take on American powerlessness in a world full of wily others, its celebration of Sikh culture in mostly inhospitable foreign climes, its glorification of the core Sikh value of loyalty (to partner, family, friend, community and nation), and most of all, its ability to laugh equally at the foibles of sardars as well as at the stereotypes about them that abound in Indian public life.

If anything, we need to be critical about the film’s portrayal of Catholicism as sanctified S&M, its depiction of Muslim women as burqa-clad two-timers who might be carrying bombs under their veils, its uncomfortable scene of taking a black FBI agent as a dummy criminal and beating him to a pulp for torture training, and other such moments when it fails to be careful about addressing not just one but two – Indian and American – multicultural audiences. For the rest, since Jo bole does us the favour of exposing identity discourse to be the joke that it is, and making us laugh about fundamentalisms, we should all insist that we be allowed to watch it. This one time, to the censor, official or self-appointed, we have to say, with the right Punjabi accent: "Oy, chhado ji, just enjoy!"

And please, can we stop killing people for going to the movies on a Sunday evening?.

Ananya Vajpeyi, Ph.D. is with the Center for the Study of Law and Governance, Jawaharlal Nehru University, New Delhi.