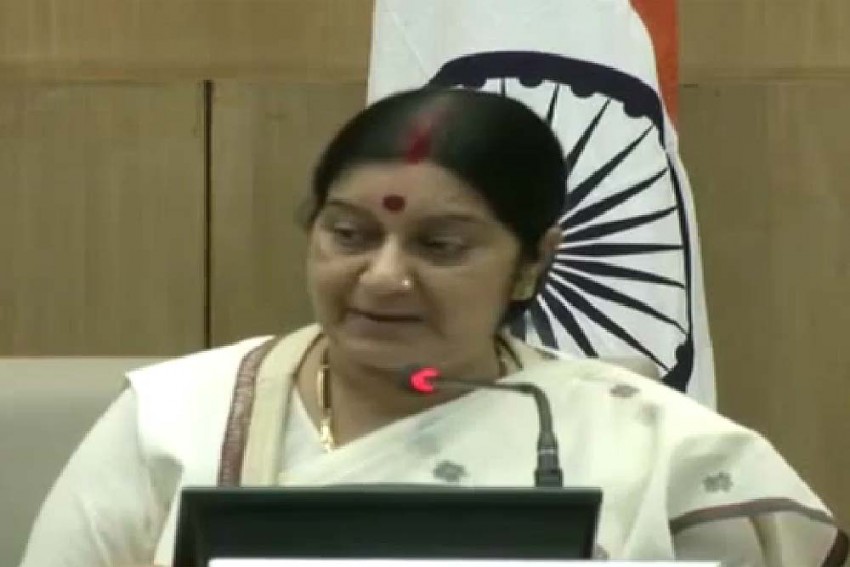 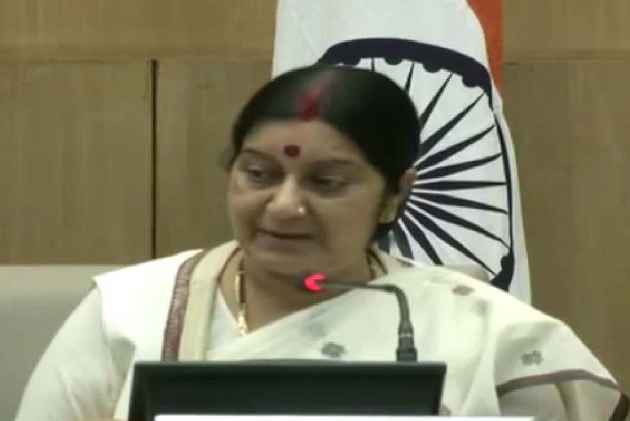 A dialogue between Narendra Modi and Nawaz Sharif in New York this month now seems a strong possibility with clear attempts by the Indian side to reach out to its estranged neighbour.

“In diplomacy there are no full stops; there are only commas and semi colons,” foreign minister Sushma Swaraj said in Delhi this afternoon while addressing her maiden press conference.

Talks between the two nuclear-armed neighbours were stalled following India’s decision to call off a scheduled meeting of their foreign secretaries in Islamabad last month. India took strong objection to Pakistan’s decision to consult Kashmiri separatist leaders in Delhi before the Islamabad talks. Pakistan justified its decision of meeting the All Party Hurriyat Conference leaders from Kashmir arguing that it was a long standing practice.

But though Swaraj noted India’s disappointment with Pakistan in meeting Kashmiri separatists, ignoring South Block’s advice, she also gave clear indications that Delhi was now willing to move ahead and find ways to engage with Islamabad.

The decision, if it culminates in that, is a smart move by India. The stalled dialogue between India and Pakistan is always an area of concern for the outside world. The US and other key world players, busy dealing with several trouble-spots on the globe, do not want to risk a reopening of the fissures between the two nuclear neighbours in South Asia on Kashmir. The fact is that Modi will also meet US President Barack Obama in Washington after his visit to New York. Among a lot of other issues, it is possible that Obama might have raised the lack of talks between India and Pakistan and hinted at the sagacity of resuming the dialogue, if the current situation continues to prevail. By taking the initiative of reaching out to Sharif, the Indian Prime Minister can cleverly anticipate Obama’s move and establish himself as a mature and seasoned statesman.

The Indian and Pakistan Prime Ministers will both be in New York to attend the UN General Assembly later this month. There is a strong possibility that they will meet on the sidelines of the Assembly to carry forward their dialogue that began in Delhi in May this year.

Modi, widely perceived as a hard-line, Hindu nationalist leader, surprised his critics by inviting Sharif and other leaders from South Asia for his inaugural ceremony soon after being elected as India’s Prime Minister. A dialogue between him and Sharif—their first-ever—had taken place the next day with a promise of meetings between the two sides in the coming days. But the dialogue process seemed derailed after the cancellation of the foreign secretary level talks. Now there are strong indications of it being restarted.

Interestingly, it is Kashmir—a complex and contentious issue that has led to four wars between the two neighbours—that seemed to have played a crucial part in changing India’s stand. While addressing the devastating floods in Kashmir—that also affected parts of the state under Pakistan’s control—Modi reached out to Sharif with an offer of  “any assistance” to deal with the situation. There was also a positive response from Pakistan.

This afternoon Swaraj refused to be drawn into any fresh controversy when asked to comment on the “harsh wordings” contained in the Pakistani Prime Minister’s response to Modi. “Let us not go into semantics and focus only at the spirit behind the missive that came from the Pakistani leaders,” the minister told the media during her interaction. “I think it conveyed a positive spirit and matched ours.”

This was Swaraj’s first press conference after she became the foreign minister in the Modi government. Though the ostensible reason for the press meet was to highlight achievements of the new government in the field of diplomacy after completing 100 days in office, she responded to nearly 50 questions on a variety of subject relating to India’s foreign policy.

The Scots may be gearing up to break their official link with the United Kingdom in a few days time but the Indian foreign minister seemed unaware of such a possibility.

“What break-up of UK are you talking about,” Sushma Swaraj retorted when asked by a British journalist on Monday afternoon about how she saw the upcoming referendum in Scotland slated for next week.

Her initial response led foreign secretary Sujatha Singh, sitting next to her whisper something in her ears, after which the minister said, “This is something for the people of Scotland to decide.”

Always keen that their minister must enjoy a positive image in the media, South Block spin-doctors explained that the initial response of Sushma Swaraj, seen by many skeptics as ignorance about developments in Scotland, was, in effect, a calibrated response. “India which is saddled with its own problem in Kashmir can’t really be seen supporting a referendum that may lead to the break- up of another country,” said a MEA official. A plausible theory no doubt but was anyone buying it?

A shift seems to have happened, if not in India’s negotiating stand then at least in its public utterance, on the unsettled boundary with China.

Ahead of Chinese President Xi Jinping’s visit to India, foreign minister Sushma Swaraj said, “If Beijing insists that we support them on the ‘one-China’ policy then we should also stress that they will have to support a ‘one India’ policy and give up its claim on Arunachal Pradesh.

President Xi is scheduled to visit Delhi later this month to hold a substantive dialogue with Prime Minister Narendra Modi and the Indian leadership with an aim to forge stronger and closer ties between the two Asian giants.

A Chinese Presidential visit to India, always an important event, gathers even more significance in view of Modi’s recent much-publicised successful visit to Japan. The East Asian rivals, whose contestations on the important waterways and islands in west Pacific—also an increasingly important area for India—has made no bones about their keenness to have Delhi as a close ally.

Sushma’s comments in the context of Xi’s visit therefore, has caused a flutter in the diplomatic circle here as many are variously speculating on what the minister meant with her comments on Arunachal