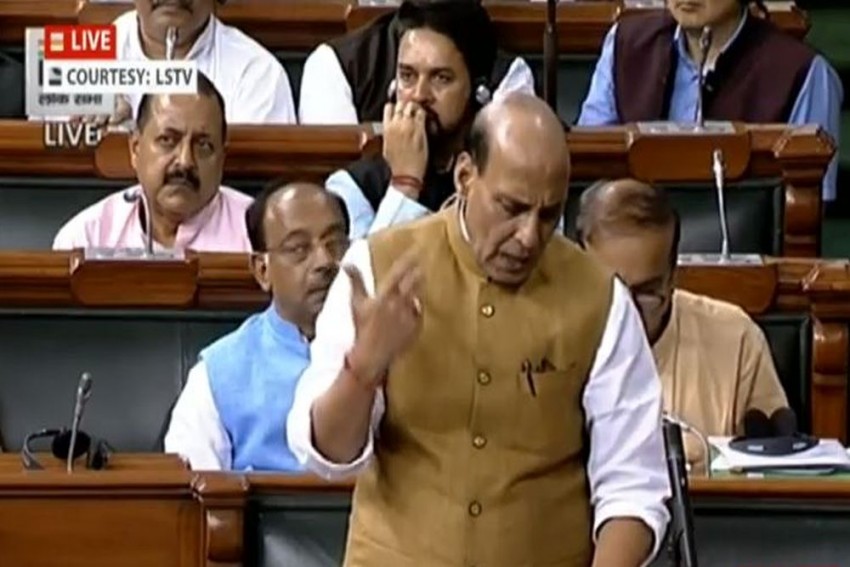 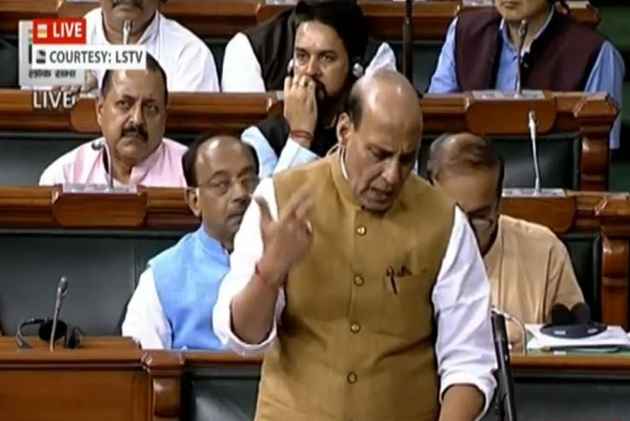 Countering the opposition attack on the BJP-led government over instances of mob lynching, Home Minister Rajnath Singh on Friday said the 1984 anti-Sikh riot was "biggest" such incident.

Speaking on the lynching incidents, one of the issues cited by the opposition to attack the government, Singh said the Centre will provide all assistance required, but the state governments should take stringent steps to curb such incidents.

"The biggest incident of the mob-lynching happened during 1984," Singh said, referring to the anti-Sikh riot that took place in the aftermath of former Prime Minister Indira Gandhi's assasination on October 31, 1984.

The minister said the government has formed a Special Investigation Team (SIT) and assured that justice would be given to the Sikh community.

Speaking on the opposition-sponsored no-confidence motion, Singh said the opposition had doubt about who will be the leader and what will the policies be.

"Against whom are you bringing no-confidence? The appeal of the prime minister is such that several people gave up the gas subsidy after he urged them do so.

"They (the opposition) do not trust each other. And when it comes to talking about the leadership, then 'gayi bhains paani mein (they lose their steam)," Singh said.

The minister said the BJP has made a mark in states like Kerela and won Tripura by a two-third margin, which was unthinkable some time ago.

Expressing displeasure for introducing the no-confidence motion despite numbers favouring the NDA, he said the BJP never thought of doing so while it was in opposition from 2004-2014 as it was convinced that Manmohan Singh was safe.

He also took a dig at the Congress saying former Prime Minister Rajiv Gandhi had ridiculed the BJP for having two MPs in the Lok Sabha in 1984. "One should not be arrogant as time changes and the same party (BJP) today has majority in Parliament."

Hitting out at Congress leader Shashi Tharoor's 'Hindu Pakistan' remark, the senior BJP leader said, "Where do they (Congress) want to take the country and what does it want India to become.

"Here, there is a talk about Hindu Taliban. India is the only country where minorities are prospering. Do they not want such an India," the Home Minister said.

Singh said the country's image has grown due to the steps taken by the Prime Minister and India is among the largest world economies and has risen from number 9 to number six over the last four years.

Referring to India's membership in the Missile Technology Control Regime club in 2016, Singh even China has not been able to become a member of the elite club.

As the Minister spoke, Telugu Desam Party (TDP) members started demanding that he should speak on the Andhra issue and created ruckus in the House. When TDP MPs started walking towards Singh, there was an alteraction between them and the members of the BJP.

With the TDP members threatening to sit in the Well, Speaker Sumitra Mahajan adjourned the House for 15 minutes.

When the House reconvened, Singh resumed his speech.

He said the Centre will provide all possible assistance for the development of Andhra Pradesh.

With regard to the TDP's demand for providing special status to Andhra Pradesh, the home minister said there were "some constraints".

Without naming Rahul Gandhi or pointing to his hugging the Prime Minister, Singh said it seems that Chipko Movement has started in Parliament.

He said after the House adjourns, "I would go out and hug Congress leader Mallikarjun Kharge."

In his speech, the home minister said there has been an improvment in the security situation in North East and added that has been steep decline in insurgency.

The Naga framemwork agreement has matured, he said, adding there has not been a single incident of terrorist attack in the last four years.

Who Is Jayadev Galla, The Millionaire MP Who Initiated TDP's No Trust Vote In Lok Sabha