She tells my broker: out on three counts -- woman, Christian, journalist. Outside, the broker implores me to tell landlords I am vegetarian. "Bolne mein kya hai, paisa to nahi lagta na." 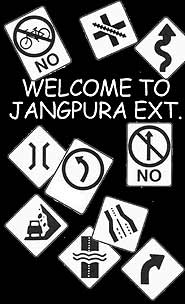 A year ago I moved to Jangpura. So many people I know, like the editor of this magazine, love Jangpura. I wanted to love it too. So what if the legendary Om Dhaba serves oily glop. So what if the legendary ham sandwich of Novelty Stores is by no means "the best in Delhi". Jangpura's parks are full of gorgeous strays. Jangpura is 10 minutes from everywhere. And neighbouring Basti Hazrat Nizamuddin stays alive even at midnight. Pretty soon I too began to ask why more people don't live in Jangpura.

The lease on my house was expiring and I've been looking for another house here for a month. That's when I learned more people have indeed discovered Jangpura. Foreign people (broker's beloved), and rents have spiralled. I was paying Rs 18,000 for a three-bedroom. After speaking to six brokers, 22,000 is the first offer for a three-bedroom house that's grabbed before I can even see it. Fine, I'll stop drinking, and raise my budget to 25,000. Brokers sound doubtful. I'll quit smoking and go up to 28. Still not enough. I'll pay 30 and get a night job.

We first got to look at three monstrosities in A Block, but at least we discovered Jangpura's Telegraph Office, all but forgotten in this SMS-age. We loved the suggestion board: "Greetings on the anniversary of the Republic". "Heartiest wishes for Bihu". We grew more determined not to leave this lovely colony.

Then we saw a gorgeous house in O Block. "Are you Christian?" the landlady asked, seeing my card. "Yes, you could say that." "Ek to aap aurat hai aur woh bhi Christian. You must be eating a lot of meat." Yes, I said, I eat all kinds of meat. "How often do you eat meat?" "As often as I can." She tells my broker: out on three counts—woman, Christian, journalist. Outside, the broker implores me to tell landlords I am vegetarian. "Bolne mein kya hai, paisa to nahi lagta na."

A week later I see a duplex for 25,000. The owner asks what I do. I say I am a journalist with Outlook. He asks if it's an Indian company. Obviously, I say, this is India. No thanks, he says, only MNCs will do. I set off to see another house but halfway there the broker calls; the vegetarian owners say no point in even bringing a Christian to see their flat. There was something about the way it was said that made me feel like a pollutant. Two weeks later another landlord says no because I'm a journalist. Apparently, we 'make trouble'.

I finally spoke to 17 brokers, all with bhajans as ringtones. Brokers in Jangpura largely worship Mata Vaishno Devi. Having trawled through the lot in this colony populated by people scared of every kind of Other, I now know the profiles that could make Jangpura the place for you: A) Non-Indian, yaani ki white. B) If Indian, family man with only male issues, non-smoking, non-drinking, vegetarian devotee of Vaishno Devi, working for non-media industry blue-chip MNC.

As for me, I gave up, but I still love Jangpura. After all, I am Christian. I prevailed on my landlady to extend my lease. Scared neighbours, please note: the meat-eating trouble-maker remains in your midst. Keep your doors locked!