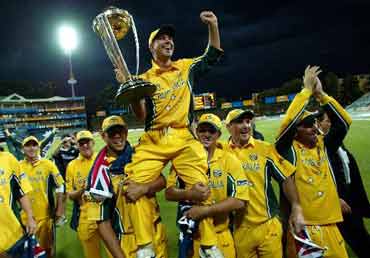 There is no such thing called honourable defeat. But these days in cricket, it is believed that Australians are the best team on this planet and events like the World Cup are staged to reconfirm this conclusion. So India's defeat to Australia in the final of the 2003 World Cup at Johannesburg's Wanderers can be described as man's defeat to machine or a valiant shot at the impossible or other consolations in this manner of speaking.

There is another way of deriving happiness. This Indian team reached the very last stage of the competition notching eight straight wins in the process, a feat it has achieved only once before in its history. It lost only twice, only to Australia on both the occasions. Language can be used in many other ways in this manner to describe the loss efficiently but then at some point in the funeral, truth has to be spoken. There is sadness in India. It's not alright to lose. It cannot be accepted as a mere inevitability in a supernatural scheme of things. It was human error. So questions have to be asked.

Did captain Ganguly put Australia into bat because they feared Brett Lee in the morning? Ganguly defended his decision to bowl first saying he was only backing his bowlers. "There was something in the pitch for the bowlers." But Ponting himself said that had he won the toss he would have batted. But then, isn't it de riguer for every captain who loses the toss to claim that he would have preferred to do just the thing that the opposing captain has forced on him? Wasn't it true that the ball, when it was dropped at the right length, did things that flummoxed the batsmen?

It was all true. But everything that had got India to the final seemed on this day to turn itself inside out and end up as an apologetic belch. The pace attack, the best that Indian cricket has ever seen, suddenly looked to be suffering from serious Abid Ali-Solkar nostalgia. Even if, let us assume, there was no assistance to the bowlers, there was no Indian spell that looked lethal. At the most, Nehra and Harbhajan were effective in the beginning. For the most part of the game, Indian bowlers seemed to have forgotten where to pitch the cricket ball. In the slog overs, Srinath and Zaheer bowled full toss after full toss after full toss (the crowning ignominy is, of course, seeing a slower ball turning into a full toss, to be hit -- to be shrugged away -- to the boundary, or over it).

Why did the bowlers bowl the way they did? Right from the first over when Zaheer Khan conceded 15 runs without making the openers work for them, the funeral had begun. There was not a single phase in the first 50 overs that were bowled on March 23 when it looked like the Australians may have thought of giving some respect to the Indians. Eighty runs were scored in the first 10. One hundred and forty three scored in the last 15. Twenty four fours were hit. Ten sixes. And 37 extras. All in exchange for two wickets. The only explanation is that the Indians were mentally disturbed by the occasion, something that Ganguly admits, though grudgingly.

Ponting told journalists after winning the World Cup that there was nothing in the body language of the Indians that made him think they believed they could win. But then, history is written by the victorious. Body language? Till the semi-final in the 1999 World Cup, Steve Waugh was supposed to have the second worst body language in the world, after Mohammad Azharuddin. And by the way, Sachin Tendulkar bites his nails like a maniac, and when he is wearing batting gloves, keeps checking if his family jewels are in place. Body language? Give me a big break.

All these explanations and post-rationalisations and kreegah bundolos of the victors are so much bovine faeces. India lost a chance to seriously question Australia's position as not just the best team in the world but also a side that is believed to have created a wide gap between itself and the rest of the population. India had that chance. And among all the cricketing nations of the world, only India could have slipped a little thin edge under Ozymandias' feet. We had that chance. We goofed it up. We have to live with this fact. A nation that is most crazy about cricket, that truly has nothing much but this sport to insert some pride into itself, has to accept to live in these times under the shadow of a superpower.

Ponting told journalists, perhaps in a way that Oscar Wilde would have described his team: "It's not that we think we are ahead of the others. It's just the way we play." But he did believe that India and Australia were the best two teams in the World Cup and that these were teams "that deserved to be in the final". There cannot be a statistical complaint against Ponting when he said that it was "a comprehensive victory against the second best team in the World Cup". A win by 125 runs fits that description, but till about the 25th over it could have been called a close match, or, at a more realistic level, a great fightback. India was 154 for 4 in 25 overs. Australia during that stage was 155 for 2. For several overs after that, if the fall of wickets were not taken into account, the mathematics was hopeless. Though when the end came in a hurry, there was no surprise, it's difficult not to ponder over just how close it could all have been if Australia had scored just over 300 and not chosen the day of the final to score their highest total ever.

Everything that worked for India in all those matches we played to set up this match, this match for the crown, suddenly hiccuped and scurried away. The bowlers failed, though not Nehra, and not that reviled young man called Dinesh Mongia. But then the two young men, Kaif and Yuvraj, the two men who embody this brilliant team more than Ganguly or Sachin, were overawed by the occasion. They failed. The bulwark of India's World Cup campaign collapsed.

But should we weep?

It's a queer fact of Indian cricket that when, even when, the team fails, individuals rise to the very top of the heap. Sitting next to Ganguly during the post final press conference was Sachin Tendulkar who was declared Man of the Tournament. It was an honour he received even before the teams went out to play the final. He said the right things at the press conference like how, "we play as a team", how he would have been happier if he had received the honour along with the World Cup. When he left after the fifth ball of Australia's first over, attempting a pull off McGrath, hope died. But Sehwag played his best knock in the World Cup to furiously bring matters at least to a point where Indian supporters found their voices back.

Ganguly lived constantly on the edge having no other option. When it began to rain during the 17th over Indian fans urged the volunteers who had crouched near the covers to go save the pitch.

When the covers did come on at the end of the 17th over, there was a huge roar and general excitement. But the 23-minute loss of play didn't subtract a single over from India's ordeal. If it had rained heavily and India had about 30 overs to reach the target, Duckworth-Lewis would have favoured India slightly. But it was a day when even the Australians had to prove that there is something called mind in physical sports. One day before the final, Ponting had said that on big occasions his team "tries to reach another level".

History is always written by the victorious. But that doesn't mean it's true. When you look back at World Cup 2003, remember Sachin Tendulkar lifting Shoaib Akhtar for a six over third man, remember Ashish Nehra bowling those incredible deliveries that no sane batsman can play, remember Kaif running out Nick Knight so fast that no photographer on earth could take that picture, remember Saurav Ganguly snarling "Bhat!" at Yuvraj when he wanted to take a second run which wasn't there, and then going up to him and hugging him. Remember Javagal Srinath, the oldest fast bowler in the world, scaring the hell out of the batsmen. Remember, above all, Rahul Dravid, the man who played always only for his team, a true cricketer and a true man.

And screw history as written by the victorious.

With Manu Joseph in Johannesburg