When Rushdie married his third wife, co-author of The Vintage Book of Indian Writing, Elizabeth West, I wore all black for an entire week. And now he was here once again. 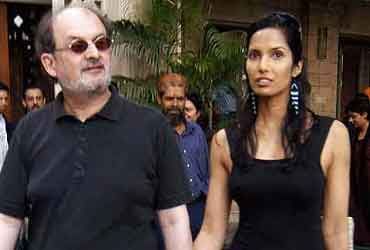 My romance with Salman Rushdie began in the 1990s as a 19-year-old BA student, when I first read Midnight’s Children. I was hopelessly infatuated by the time my MA years rolled in.

When Rushdie married his third wife, co-author of The Vintage Book of Indian Writing, Elizabeth West, I wore all black for an entire week. By now, word of my obsessive crush had spread to the faculty. ‘‘Maybe four will be your lucky number,’’ a professor consoled, ‘‘But will you grow up for now?’’

Now, my secret beloved is here, smirking into cameras and spreading cheer in private parties: Industrialist Kishore Bajaj has one at his home, with guests like international film director Shekhar Kapur. At Thomas Cook managing director Ashwini Kakkar’s, queen bee Parmeshwar Godrej fought off TV hostess Simi Garewal to sit next to Rushdie.

Meanwhile, my big chance came. Society hostess and friend Sheetal Mafatlal — she knew Rushdie from London ("met him at a party and we just clicked") — invited me for one of those intimate dinners.

At the opulent Mafatlal Bungalow, Rushdie is at the farthest end, surrounded by people like the glamourous Mahesh and Hasina Jethmalani, restaurateurs Sudhir and Rashmi Behl, film-maker Sanjay Khan and host Atulya Mafatlal.

Rushdie’s girlfriend, actress and cook-book writer Padma Lakshmi, is draped around him, pecking his bald head. Images of Renee Zellweger making an ass of herself in Bridget Jones’ Diary in front of him went through my head. Hopefully, the literature degrees would prevent any gaffes (and what do you have, Padma?)

Mercifully, Rushdie isn’t anything like in Bridget Jones. He is affably approachable, paunchy and, er, slightly older. Software genius Rohita Doshi’s 10-year-old son is a fellow-fan and he’s sent his favourite book, Haroun and the Sea of Stories, for an autograph, which Rohita has embarrassedly left in her car. When Rushdie hears of it, he tells her, "Will you please bring the book right away," and signs a note.

Then, someone whispers, "Have you read any of his books? His English really good, or what?" Idiot.

A few minutes later, I’ve moved closer to his group when he looks at me and smiles politely. We are introduced (by Mahesh J) and he shakes my hand. Rashmi Behl teases, "Bet you won’t ever wash your hands now."

"I’ve read all your books, Mr Rushdie," I brave a sentence. He rolls his eyes, looks around the room and says, "thank you" to which we both share an ice-breaking laugh. "You know, I have to tell you an embarrassing story..." I tell him about my black fashion week on account of his marriage. "Well that didn’t last too long," he chuckles. Padma, fortunately, is flitting around the room.

A few minutes of chatting followed—says he’s spent the day shopping and browsing through the city. He’s fallen for ‘Bombay’ all over again, saying it always brings out a book in him (can hardly wait).

And then, we are led to the dining room, where Sheetal has decorated the table with rare first editions, red roses and crimson candles. For old romances, first loves and new flames, of course.

'I Know The Inside Story'