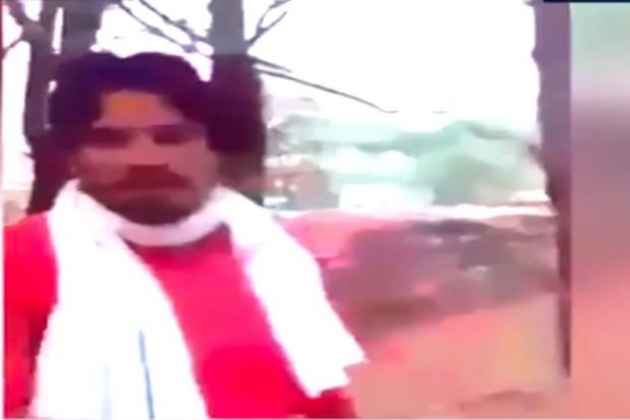 The murder of 50-year-old Muslim labourer, who was hacked and burnt alive in Rajasthan's Rajsamand district, was recorded on camera by the minor nephew of accused Shambhulal Regar, said news agency PTI.

Regar, after killing Mohammed Bhatta Sheikh, a resident of West Bengal, was seen on a video ranting that he did it to “stop Love Jihad”-- a term publicised by the Hindutva groups to refer to Muslim men marrying Hindu women and converting them to Islam.

In the video that was later uploaded on social media, the perpetrator, with a saffron teeka on his head, is seen threatening with impunity in front of the camera: 'Those who will commit love jihad, will meet with the same fate.'

Police said Raigar was arrested in Rajsamand, about five hours from the Rajasthan capital of Jaipur, on Thursday.

"He is seen shouting against 'love jihad' in the video and why he did so is under investigation," DGP O P Galhotra said.

Sita, wife of the accused, told The Indian Express that her husband didn't have a job and most of the time he would smoke marijuana and roam on the streets.

His minor daughter, who Galhotra said was suffering from a mental disorder, was with Raigar when he was arrested.

The internet was suspended in Rajsamand to stop the videos from being shared on social media sites. Sources said there were fears the clips could lead to communal tension.

"We strongly condemn the heinous killing of a labourer from Bengal in Rajasthan. How can people be so inhuman. Sad," Banerjee tweeted.

SP Rajsamand Manoj Kumar said the accused attacked Afrazul with a sharp-edged weapon, poured kerosene over him and then torched him.

“This is among the rarest of rare cases and at the end of a trial, we will seek death for him,” the DGP said.

Afrazul's relatives, who described him as the family's sole earning member, demanded strict action against Raigar.

"We want a thorough investigation and the culprit to be punished," a relative told reporters in Malda in West Bengal.

Galhotra said primary investigations revealed Raigar was not affiliated to any organistation.

"It is being investigated why he had that kind of a mindset,” the officer said.

Chief minister Raje appreciated the action by the police and directed that the criminal be prosecuted at the earliest.

“This is a deplorable act which needs to be condemned in the strongest possible terms,” she said in a statement.

Her home minister Gulabchand Kataria, who described it as a shocking incident, told reporters in Jaipur that he had asked officers to set up a Special Investigation Team (SIT) to probe the matter when it was was reported to him last night.

Afrazul's family said it did not know why he was killed.

"We don't know the real reason behind his killing. He was the sole breadwinner of the family. We came to know that the person who killed him had called him on the pretext of giving him work," a relative said.

Afrazul had been living and working in Rajasthan for several years.

The killing drew the ire of human right groups which demanded the resignation of Raje and and Kataria, accusing them of protecting those behind targeted attacks on Muslims.

“Although the police have arrested the murderer ... It is important to reach the people who motivated him to carry out this murder,” the statement by bodies such as the Peoples’ Union for Civil Liberties, National Federation of Indian Women, All India Democratic Women’s Association and Mazdoor Kisan Shakti Sangathan said.

The statement said this was the fourth such killing in the last nine months, referring to the lynching of Pehlu Khan and Zafar Khan and the killing of Umar Mohammad by alleged cow vigilantes in Alwar.