'Mulk Raj Anand Was So Patronising'

The author of Outcatse: A Memoir, an economist with the RBI, says the difference between Dalits writing about themselves and others is what you see between the love of a mother and a nurse. 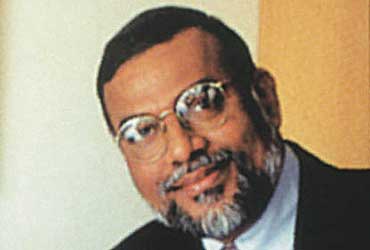 How is that your work elicited French interest even before it did Indian English publishers?

I wrote this book during my stay in Washington DC for four years with a global readership in mind. That is precisely why the social context which was implicit in the Marathi version has been fully spelt out in the English version. The first major publisher to accept it was Fayard in Paris, and they published it in time for Les Belle E’trangiries, an annual festival where the French government invites top 20 litterateurs from a country; 2002 was for India. Recently, the National Club of France bought 10,000 copies of the book for their catalogue sales, a rare honour for a non-French writer. The Spanish version is to appear sometime in November.

Is it being seen as politically correct to publish Dalit texts now?

There is a widespread interest now in Dalit writings the world over. Not because it is politically correct but because people want to know more about the lives of whom they knew so little about. I was amazed at the range of questions about the caste system that were raised during my public interactions in different parts of France. I received more questions than others, and my books sold more.

What’s your impression of the literature produced by non-Dalits on Dalits?

Though in Marathi non-Dalits like S.M.Mate and Venkatesh Madgulkar wrote of Dalits with empathy, the difference between Dalits writing about themselves and others is what you see between the love of a mother and a nurse. There are certain limits to literary imagination. Mulk Raj Anand was so patronising.

I sincerely believe it does. The mainstream simply had no idea about the kind of life their own brethren were living outside the bounds of their village. With the universalisation of education, Dalits are speaking out and others are willing and more interested to listen.

What next from you? Any fiction?

When in Dubai for the IMF meet, I jotted down the story of my brother who died last year. I want to reissue an expanded version of my Marathi book on the occasion of its tenth anniversary. Why no fiction? Well, the facts that I have to share are far more stranger than fiction.